It appeared 2017 would be the year where uncertainty spun the world’s economy into chaos, but this was not the case. The firms that capitalised on this surprise result have been recognised in this year’s World Finance Wealth Management Awards 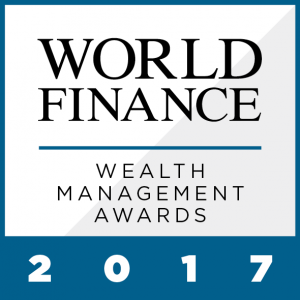 If the mood at the end of 2016 was to be distilled to a single word, it would surely be ‘uncertainty’. Shocking election results in the US and UK, accompanied by the emergence of AI-powered technologies, had investors and wealth managers wringing their hands. Governments, businesses and the media dissected the potential impact of these forces, leaving many leaders trapped in a state of indecision. However, as we make our way further into 2018, the skies look far clearer than they did 12 months ago. The threats of doom and gloom have not yet come to pass, and may never do so if trends continue.

Wealth managers have to examine markets critically and remove themselves from the temptation to look only at short-term problems; considering the bigger picture is the only way to successfully do business

Identifying real threats and ignoring irrelevant noise will be of increasing importance for wealth managers as the industry grows. According to a 2017 report by PwC, titled Asset & Wealth Management Revolution: Embracing Exponential Change, the total amount of global assets under management will double by 2025. This means an increase from $84.9trn in 2016 to $145.4trn in 2025. “Asset managers can take advantage of this massive global growth opportunity if they’re innovative,” said Olwyn Alexander, PwC’s Global Asset and Wealth Management Leader, at the release of the report. “But it’s do or die, and there will be a great divide between few haves and many have nots. As a result, things will look very different in five to 10 years’ time, and we expect to see fewer firms managing far more assets significantly more cheaply.”

To successfully navigate 2017, wealth managers had to examine markets critically and remove themselves from the temptation to look only at short-term problems; considering the bigger picture is the only way to successfully do business. The winners of World Finance’s 2017 Wealth Management Awards have deftly navigated these market challenges and avoided the pitfall of indecision. Where many panicked, these leaders acted with confidence and ensured they took full advantage of what the year presented them with. With increased competition between firms expected in the coming years, only the most successful will survive.

Unstable market, stable gains
The trend of uncertainty failing to hurt the world’s economy is perhaps best illustrated by the performance of the US market. The Dow Jones broke its own closing record 69 times in 2017, surpassing 24,000 in December. While the Dow is by no means a thorough tool for measuring the performance of an economy, its success was echoed in other measurements. The Chicago Board of Operations Volatility Index hit its lowest point ever in November, adding to evidence that the worst-case scenario expected by many will not come to pass.

The US was the ultimate leader in global wealth creation, continuing a surge of gains as post-financial-crisis growth continues. The US added $8.5trn to global wealth during 2017, according to Credit Suisse’s 2017 Global Wealth Report; more than half of the world’s total growth. “So far, the Trump presidency has seen businesses flourish and employment grow, though the ongoing supportive role played by the Federal Reserve has undoubtedly played a part here as well, and wealth inequality remains a prominent issue,” said Michael O’Sullivan, Chief Information Officer for International Wealth Management at Credit Suisse, when the report was released. “Looking ahead, however, high market valuations and property prices may curb the pace of growth in future years.”

While not as dramatic as the US, Europe also posted consistent wealth growth. In absolute terms, Germany, France, Italy and Spain made it into the top 10 countries with the biggest gains. According to Credit Suisse’s findings, the biggest winner was Poland: it posted an 18 percent increase in average household wealth gain, a rise that was driven mainly by equity prices. Asia also saw significant growth as the region started catching up to the more developed economies of the West. This continued wealth growth will fuel the global wealth management industry and act as the catalyst for the industry’s expected surge.

Technologically difficult
Apart from the growing market that is placing increasing pressure on smaller wealth management players, technological change is also accelerating competitiveness in the industry. One significant development pertinent to the wealth management industry is the ability of robotic process automation (RPA) to reduce costs, particularly as regulation makes business-as-usual more expensive.

According to Capgemini’s Top 10 Trends in Wealth Management 2018 report, the automation of basic, repetitive and time-consuming tasks can speed up processes by 60 percent. The tools are also easier to implement than ever before; RPA does not require existing computer systems to be rebuilt and can be done step by step, even without programming knowledge. Client on-boarding, back office operation automation and regulation compliance are just a few of the many ways RPA systems are being utilised. Compliance is particularly notable, as it is set to dominate the costs of many companies in the near future.

Also noted in Capgemini’s report is the tremendous scrutiny the wealth management industry has faced on the back of the global financial crisis, with regulations changing at a tremendous pace. In 2016 alone, Thomson Reuters Regulatory Intelligence tracked more than 52,000 regulatory updates divided among 500 regulators across the globe. Many changes relate to increasing transparency, drawing clearer distinctions around conflicts of interest and providing greater consumer protection.

Adding to the already tremendous challenge facing wealth management companies is the fact that regulations are going in very different directions across regions, particularly when it comes to new technology. Of particular note is Europe’s incoming General Data Protection Regulation, which will likely require a significant update of computer systems in many wealth management companies. The firms that will succeed in this environment will be the ones that find ways of doing business more efficiently while still meeting the strict new regulations that continue to emerge.

Innovate to differentiate
One potential benefit of all this change is the opportunity for enterprising wealth management firms to differentiate themselves from their competitors, something many have often failed to do. Capgemini noted that other sectors of the financial services industry are well ahead in this regard, and there is plenty of opportunity for the wealth management sector to catch up. Differentiating products and services from competitors will be necessary as automation and regulations make competing solely on price far more difficult. As high-net-worth individuals demand greater customer service, communication will be a deciding factor in many clients’ decisions.

Saying firms need to integrate more innovation into their business models may be a cliché, but doing something truly unique is still the best way to stand out. Though tremendously difficult, the current landscape of the wealth management industry necessitates that companies do exactly this to survive.

These forces will push the wealth management industry to achieve bigger and better things in 2018. The winners of World Finance’s 2017 Wealth Management Awards are the firms that have shown the aptitude and skill to examine a financial landscape that is becoming more competitive every day.