While political events have left many feeling pessimistic about the future, the global banking sector can largely be viewed in a positive light. Leaders must stay on top of economic and technological trends in order to keep it this way 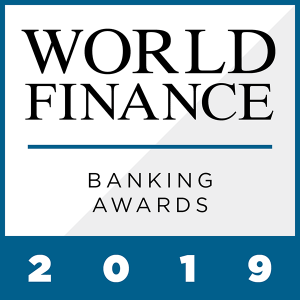 With Brexit looming and trade wars causing political uncertainty around the world, it’s easy to believe the economic landscape is equally tumultuous. However, almost the opposite is true: a decade after the financial crisis and the banking sector is in one of its strongest states in recent history. The Banker’s Top 1,000 World Banks ranking showed that in 2018, total assets reached $124trn, with the return on assets standing at 0.9 percent. 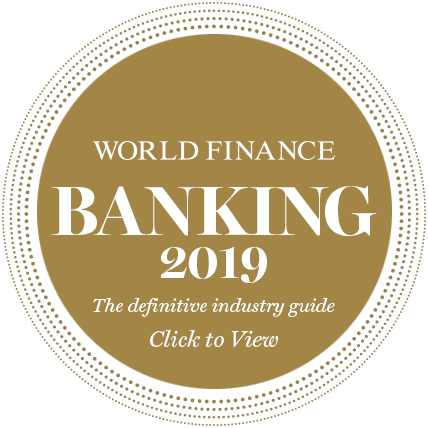 Instrumental to the recovery of the industry has been the US, which has had one of the fastest recoveries since the financial crisis. Total assets at US banks reached a peak of $17.5trn at the end of last year, according to Deloitte’s 2019 Banking and Capital Markets Outlook, while capital levels are also on the rise. Return on equity for banking is at a post-crisis high of 11.83 percent, and in other metrics, including non-performing loans, the US has fared well. Furthermore, the Deloitte report suggested that aggressive policy inventions and forceful regulations are behind the excellent performance of the country’s banks.

China has also provided a boost to the sector over the past decade, with its banking industry having overtaken that of the eurozone in terms of assets in 2017, according to the Financial Times. In 2007, none of the top five banks in the world were Chinese, but now – thanks to the overwhelming profitability of its institutions – four of them are (see Fig 1). Analysts at Accenture have credited China’s impressive digital strategy for its rapid growth: the country has more than a billion regular users of mobile payments, thanks to apps like Alipay and WeChat, through which Chinese citizens conducted two thirds of all global mobile payment transactions in 2018. 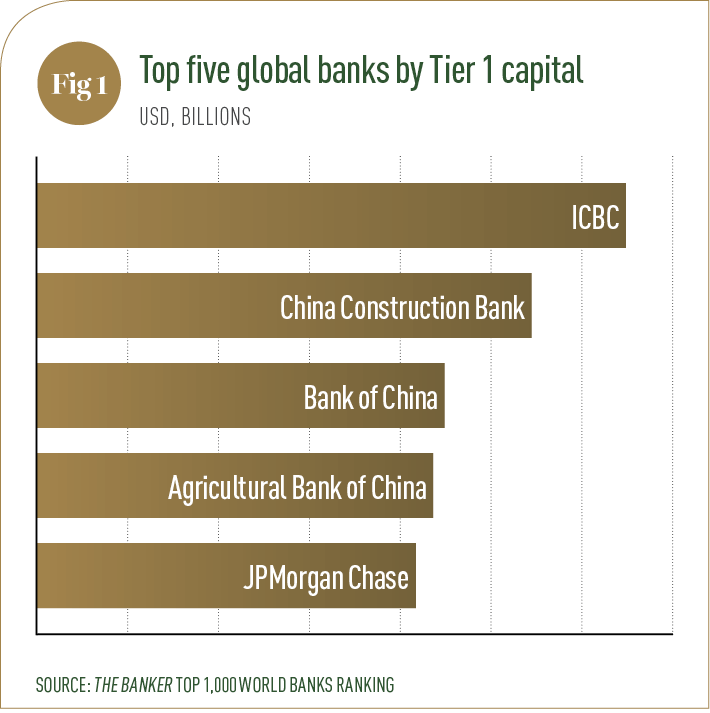 Varied landscape
Though the overall performance of banks has been robust, there has been mixed success across specific regions. European banks have become smaller and more risk-averse in their approach, causing them to retreat from international markets. A mixture of low and negative interest rates, a lack of pan-European regulatory agency, structural deficiencies and overcapacity saw the profits of the top five European banks fall from $60bn in 2007 to $17.5bn in 2017. Japan has suffered too, thanks to the impact of slow domestic growth and disappointing exports.

The future for these countries is as varied as their current economic situations. There are indicators that Europe’s fortunes are about to change, with return on equity for the top 1,000 Western European banks rising from 5.5 percent in 2016 to 8.6 percent in 2017. Analysts are cautious about other parts of the world, though: the IMF’s real GDP growth forecasts suggest there will be a deceleration in all regions. Meanwhile, Deloitte economists have said there is a 25 percent chance of a recession in the US this year. China and the US’ tariff war could also drag on, to the detriment of global markets.

In order to accelerate the banking industry, leaders must innovate as much as possible, particularly with regards to their technological processes. Digitalisation is perhaps the most important area for them to stay on top of, with experts warning banks not to be complacent, as a large number of new players are already sweeping in where legacy banks have failed to take hold. The UK is just one example of this, with more than a third of new revenue and 15 percent of overall revenue now flowing to new entrants, according to Accenture. Organisations like Monzo, Starling Bank and Revolut have snapped up millions of customers, many of whom are seeking out a service that’s quick, convenient and easily accessible.

Tech revolution
In the coming years, artificial intelligence (AI), the cloud, robotic process automation (RPA) and blockchain will become increasingly important to banks’ success. Though these systems are complex and difficult to integrate into existing processes, when done correctly, they create a win-win situation for banks and their customers, building trust and engagement in the process. RPA can also lead to better productivity gains, while AI is able to streamline operations and provide important insights into consumer behaviour.

By implementing these technologies, banks can also better meet regulatory requirements. The EU General Data Protection Regulation, for example, requires banks to ensure the privacy of their customers’ data, which they can do much more easily when they have modernised platforms. Institutions that do not prioritise digital transformation can create major hazards for themselves, particularly if their systems do not adequately protect customers. There’s also the growing pressure to provide adequate cybersecurity to contend with.

In order to bolster technological services, human capital is vital. In its Banking and Capital Market Trends 2019 report, PwC suggested this is one of the biggest stumbling blocks for institutions that are trying to evolve, with almost 80 percent of banking and capital market CEOs seeing skills shortages as a threat to their growth prospects. According to the report, 35 percent of CEOs are ‘extremely concerned’, with 44 percent being ‘somewhat concerned’.

Clearly, a large number of institutions understand the need to digitalise: it can help them create more seamless interactions with customers and can bring their brands to life. According to the PwC report, more than 90 percent of CEOs believe AI will be key to their development, but they also need savvy individuals to knit these technologies together. PwC noted: “Technology alone can’t meet customer expectations; consumers still value human interaction and accountability.”

Overall, there is reason to be optimistic about the future of banking, which has made astronomical strides since the financial crisis. But its outlook rests upon a huge number of intricate variables, such as transparency, regulatory compliance and institutions’ ability to harmonise and expand their digital offerings. Organisations that are bold in their approach are most likely to reap the rewards and enhance the overall health of the sector.

The 2019 World Finance Banking Awards have sought to identify the banks that have excelled across a number of areas, including corporate governance, sustainability and innovation, and have played a key role in the industry’s growth. Congratulations to all our winners.

Bankers of the Year