Corporate Finance Deals of the Year 2016

As we leave the financial crisis behind, investment opportunities have begun to flow once more – but challenges remain. In the World Finance Corporate Finance Deals of the Year, we pay tribute to those who have managed to navigate these waters successfully 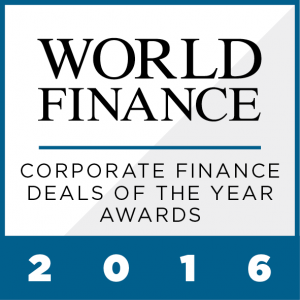 The instability that has so characterised the global economy in recent times has made the conditions for both businesses and investors hard to predict. Risk-taking is less common and financial gambles are few and far between, out of fear of a volatile operating environment that has already taken so many prisoners.

As much as caution remains the defining sentiment of the corporate world, the promise of an economic recovery has done a great deal to give buyers the confidence to seek out acquisitions.

Accumulated cash reserves have played their part in the last couple of years, and the healthcare, media and technology, and telecoms sectors in particular have sparked something of a deal spree of late. Global mergers and acquisitions (M&A) reached record levels in 2015, with the volume of deals hitting $5trn, according to JPMorgan Chase. This was thanks in large part to growing activity in Asia and the overall globalisation of the market.

While activity has slowed down slightly this year, with global M&A volume until April 2016 sitting at $986bn – compared with $1.24trn the previous year – it remains relatively buoyant. With the majority of corporations having gone through a period of relative inactivity, a string of recent deals has underlined the merits of corporate financing, particularly in commodities, where consolidation has proved effective in combatting overcapacity.

That’s especially true of the oil and gas industry, where the number of deals has surged over recent times on the back of sliding oil prices. Consolidation has been the response to high debt levels in the sector – almost 10 times earnings before interest, tax, depreciation and amortisation, according to a recent report by McKinsey – enabling production firms to remain competitive at a challenging time. “Healthy companies may have been slow to start deals, but they’ll clearly want to be on the lookout to strengthen their competitive positions as new opportunities emerge”, the report noted.

Despite signs of buoyancy, however, the current market isn’t without its complications. According to a report by Deloitte: “These improvements notwithstanding, headwinds remain. The market may be challenged by an unexpected extension of the prolonged low interest rate environment, heightened regulatory scrutiny of potential transactions, and cautious acquirers and sellers – with valuations varying widely based on fundamental differences pertaining to each target.”

Such heightened regulation around mergers has become especially evident in the US, with regulators tightening their policies and cracking down on deals in order to combat anti-competitive activity and protect national security. According to Steven Epstein, Partner and Co-Head of the Mergers and Acquisitions Practice at Fried, Frank, Harris, Shriver & Jacobson LLP: “Antitrust regulators have more frequently been applying increased scrutiny to transactions, requiring more broad-based remedies as a condition of granting approvals, and more often commencing litigation to block transactions.”

The report added that merger reviews by the Committee on Foreign Investment in the US around security concerns have also increased, even among corporations not directly linked to known security risks. Indeed, a quick glance at some of the collapsed deals over the past year shows evidence of the current framework.

Geopolitical effects
Elsewhere, geopolitical risks have had their part to play in the current shape of the market. Last year’s Paris terrorist attacks and tensions between Saudi Arabia and Iran earlier on in 2016, combined with various other political battles, have contributed to an environment of uncertainty.

M&A activity in the Middle East slowed at the start of 2016, with outbound transactions dropping 85 percent year-on-year to Q1 2016, marking the lowest level for that period in six years. Over in the UK, M&A activity slumped in anticipation of the Brexit vote, and even now the market continues to struggle from lower levels of investor confidence, with activity in the country this year reaching its lowest point since 2011, according to Dealogic.

How the legal framework for deals might change once the UK’s negotiations with the EU have been made remains to be seen; regulatory changes for international mergers will likely depend on whether the UK remains a member of the European Economic Area, but until the negotiations are concluded, it’s likely the UK and its potential investors will continue to experience challenges.

Optimists predict overseas players may well be able to pluck opportunity from the weak currency, however, by snapping up bargain deals and helping to prevent an all-out slowdown in the short term. A large pool of cheap financing has propped up the UK market so far, and Asian investors in particular have been eyeing up UK assets.

The Asia-Pacific region has continued to power through with its successful spate of M&As, with volume from the region hitting $1.5trn in 2015 – almost twice the amount seen in 2013. China has dominated the scene, despite concerns from some that slumped growth there could cause a slowdown.

In the first four months of 2016, Chinese investors announced 70 percent of the biggest cross-border buyouts from Asia, according to JPMorgan Chase. The volume of Chinese M&A transactions reached $735bn last year – almost triple the sum seen in 2013 – thanks to a rising middle-class, a favourable regulatory and funding framework, and vast experience in completing cross-border deals. That is a powerful combination when combined with China’s overall shift towards technology-driven investments – a factor that means North America and Europe are its prime targets.

New technologies
It’s not just in the M&A market that change is causing ripples: across the broader sphere of corporate finance, digitalisation is bringing its own implications to bear, and with new technologies, financial structures are changing. For example, recent research by Accenture found 80 percent of traditional finance services will be carried out by cross-functional integrated teams by 2020.

Such technologies are of course bringing ample opportunity alongside the challenges. The increasing use of big data in financial departments means it is becoming easier than ever to predict performance, seek out potential new markets, and assess (and track) financial risks. Companies are already seeing the benefits as well as the drawbacks.

It is by making the most of those benefits and adapting to these changes that corporations will succeed in today’s climate, and it is herein that the World Finance Corporate Finance Deals of the Year recipients have thrived, weathering the storm that was the financial crisis and retaining their competitiveness during times of volatility.

By overcoming geopolitical challenges and making the most of the opportunities that the current M&A market presents, our award winners offer an insight into what it takes to succeed in today’s market and the ways in which the industry is likely to change in the coming years. They provide an example to which the wider industry should pay heed, thriving in the face of uncertainty and plucking opportunity from instability.

Sovereign Issuer of the Year
Republic of Peru

Quasi-Sovereign Bond of the Year
Pemex

Refinancing Deal of the Year
Gruma

Multisource Financing of the Year
Fibria

Cross-Border Deal of the Year
Itau Chile and CorpBanca

M&A Deal of the Year
Haitong Securities and BESI

Multi-Currency Deal of the Year
Naspers

IPO of the Year
Nemak IPO