Project Finance Deals of the Year 2017

As the project finance sector battles with uncertain global politics and a sustained dip in commodity prices, adaptability is the order of the day 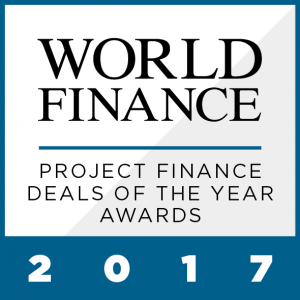 Last year, Tiwi-MakBan, a Philippines-based geothermal energy project, launched with the first ever green bond issuance in the Asia-Pacific region. The project, backed in part by the Asian Development Bank, will carry out the rehabilitation of two of the biggest geothermal facilities in the world, creating 390 MW of clean renewable power for the Luzon grid.

The scheme will play a key role in meeting the nation’s rapidly growing energy needs, and has created an important precedent for the use of green bonds in the region. The venture is a classic case of how certain projects in the sector are driving ahead in spite of challenges, while turning towards more green investments and finding new and innovative ways to tap into private funds.

Despite uncertainty caused by global political events and persistently low commodity prices, the past year has seen the conclusion of a wide array of impressive projects and deals. World Finance looks to recognise those who have shown versatility and vision in the face of persistent challenges in the sector.

As always, the project finance sector is dictated by the march of technology, the twists and turns of commodity prices, and influential political events

The immense task of drawing up a project and carrying it through to completion requires remarkable leadership and ambition, ultimately forming vital pieces of infrastructure that are the bedrock of economies all over the globe.

The Project Finance Deals of the Year celebrate those that stand out for breaking new ground and driving forward with the biggest and most exciting projects, and provides a comprehensive list of the most noteworthy projects and deals that have taken place in the sector over the past year.

Project pursuit
This year, the need for large scale infrastructure investments has dominated headlines. For one, the Asian Development Bank estimated that developing Asia must invest $1.7trn per year in infrastructure until 2030 in order to maintain its growth momentum, tackle poverty and respond to the issue of climate change. Even assuming fiscal reform could fill part of this investment gap, the bank said private sector investment would have to increase “dramatically”. More specifically, the bank estimated that, for the private sector to fill the gap, it would have to increase investments fourfold from $63bn to as high as $250bn per year over the period from 2016 to 2020.

Furthermore, the McKinsey Global Institute released a report assessing the worldwide need for increased infrastructure investment. The report estimated that, from 2016 to 2030, the world must invest an average of $3.3trn a year in economic infrastructure in order to support expected rates of growth. Simultaneously, governments around the world – including those in the US, Indonesia and India – have underscored the need for sizeable infrastructure and energy investments in order to stimulate economic growth and jobs.

A state of flux
Despite a clear demand for a greater number of projects, the sector continues to be squeezed by the ongoing dip in commodity prices. While prices have begun to pick up for certain commodities, the aftermath of the persistent slump is still being felt through tighter liquidity availability for projects and lower project returns. Furthermore, a lacklustre global recovery is exacerbating such concerns.

Another crucial issue being faced is the considerable political uncertainty weighing on decision makers. This is particularly the case in Europe, where a busy calendar of elections has prompted fears of potentially destabilising political shifts. Meanwhile, Brexit negotiations are underway, leaving a lot up in the air for the region.

Donald Trump’s election victory has triggered further uncertainties in the US, and the lengthy process of translating campaign promises into policy is still ongoing. In particular, several important policy choices regarding energy and infrastructure are still being clarified, which will inevitably have substantial ripple effects for the project finance industry.

Indeed, the global project finance sector has seen a somewhat tentative start to 2017 compared with recent years. According to data from Thomson Reuters, the sector saw 162 deals worth a total of $43.3bn during the first quarter of 2017, marking a 19.4 percent decline from the same time last year. The sector has been particularly slow in the US, with the lowest first quarter recorded since 2013. Volumes were also low for the Europe, Middle East and Africa region, where project finance totalled $17.0bn, down 45.9 percent year-on-year. In contrast, the Asia-Pacific region has succeeded in bucking this trend, with volumes increasing 55.9 percent from last year.

While the volume of project loans declined overall, the past year saw a promising resurgence of bond financing. In fact, project bond issuance actually increased by $8.3bn, bringing the total volume to $43.6bn. This momentum is a positive sign that the sector is diversifying to find new ways to tackle the ongoing disconnect between the investors seeking opportunities and the projects that need their capital. By creating a better functioning market, enhanced bond issuance has the potential to bring a huge injection of funding to the project finance space by unlocking cash from investors, such as insurers, pension funds and sovereign wealth funds.

In particular, the project bond market is being driven forward by the US, which completed $13.6bn in bond volume last year, up from $10.8bn in the previous year. Green bond issuance has also blossomed in China over the past year, which looks set to continue to provide extra liquidity for the renewables sector in the future. Likewise, bond activity has surged forward in Mexico, where reforms surrounding bond issuance are setting the conditions for fresh project opportunities.

Adapting to stay ahead
As always, the project finance sector is dictated by the march of technology, the twists and turns of commodity prices, and influential political events. While the sector has been dented by the low commodity prices seen over recent years, this has come alongside new opportunities in the renewables space.

Markets have continued to shift towards greener energy sources, spurred by technological advances and improved efficiency across a number of renewable sectors. Looking ahead, the need to push forward and adjust to a shifting regulatory setting will present both challenges and opportunities in the sector.

Faced with a landscape clouded by many obstacles, the brightest players in the sector are capturing the best opportunities, while rapidly adapting to those events that shape the markets. The World Finance Project Finance Deals of the Year 2017 celebrate those projects that exemplify the best of the sector with the most forward-thinking and exciting projects.