As one of South America’s largest engineering projects, the Corredor Bioceanico Aconcagua will link trade between Brazil, Argentina and Chile through a train tunnel under the Andes, strengthening the region’s commercial ties 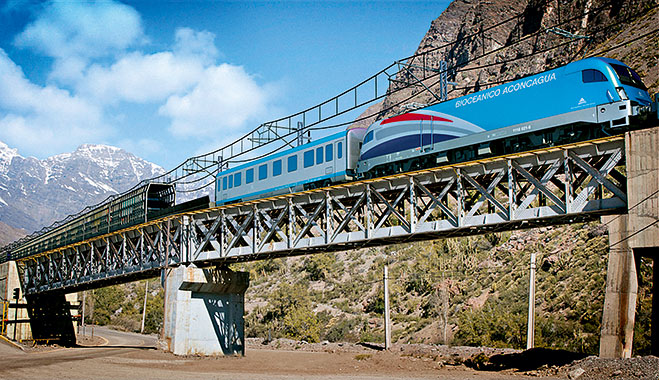 The Corredor Bioceanico Aconcagua project, known as the CBA, is an Argentine private initiative charged with the construction and implementation of a state-of-the-art high-load-capacity railway network linking the Chilean Pacific ports with the Argentine, Uruguayan an Brazilian ports and hubs, which, on completion, will cement a new level of physical and commercial integration between the Southern Cone countries and the continent.

The initiative, presented by the Argentine holding Corporación América, aims to resolve the Mercosur – Chile Axis bottleneck – with the construction of a 205km multimodal rail corridor that includes a 52km base tunnel under the Andes. This new terrestrial pass will not only operate all year round, but it will also make significant savings in terms of costs and transit times.

The transit system, when in its final phase will carry up to 77 million tonnes of cargo per year, ranging from containers to trucks, will improve the crossing itself, and will also bolster the vast network of roads, rails and ports on both sides of the Andes.

Spanning a vast region of growth
The network is made up of thousands of kilometres of road, water and rail tracks, which connect Brazil and Argentina’s most productive regions with Chile’s access to the Pacific Ocean. The footprint of this network spans three million square kilometres, home to 126 million people and accountable for 70 percent of the region’s GDP generation.

With this innovative approach, the integration of Mercosur (Argentina, Brazil, Uruguay and Paraguay) will, improve competitiveness and general welfare locally, regionally and globally. Chile will also be substantially improved, given that the CBA eliminates the current bottleneck in land transit across the Argentine-Chile border.

Argentina and Chile share one of the world’s longest land borders, however, the uncompromising terrain means that existing terrestrial passes are far from ideal. Today, as much as 70 percent of the land freight that passes the Andes through Chile and Argentina does so via the Cristo Redentor Pass (CRP), which remains unreliable at best due to altitude and weather conditions.

Tonnes of cargo per year

In addition to lengthy closures, the CRP is near to total capacity saturation (at five million tonnes of cargo per year) and boasts very little opportunity for expansion. Argentine and Chilean governments have been working to improve the CRP or CR Pass – both in terms of hardware and software – but optimistic projections are aiming to expand capacity up to no more than seven million tonnes per year.

The geography of the region allows for little in the way of expansion for the current system. As a consequence, 80 percent of the cargo that passes between the two bands of the Southern Cone travel by sea, even in instances where these routes are longer and more expensive.

The multimodal rail system has been implemented as a result of six years worth of study, and the finished product’s high load capacity, at 24 million tonnes per year at stage one and 77 million tonnes by stage three, along with its strategic construction should allow for a 365 days a year uninterrupted service. The electric railway, which spans 205 km from Los Andes to Luján de Cuyo, in the same gauge of the Chilean and Argentinean railway networks will open new possible route combinations to trade, allowing each operator to design the optimal route with a dramatic increase in delivery certainty.

Aside from increased efficiency and regional competitiveness, the system offers a number of advantages over existing infrastructural links. The project’s construction in three stages allows investment recovery to be consistent with demand, seriously reducing risks. The system’s multi-modal capacity ensures the project is made far more flexible than the existing road system, creating synergies and efficiency allowing several possible combinations; and mainly, increased economic efficiency through arrival certainty and quicker crossing times (four hours at stage one and two and half hours at stage three compared with the current 12 hour cross). There is also lower energy consumption all round.

Well structured scheduling
The construction schedule for stage one is expected to span 10 years, and involves the build-out of the base tunnel and critical path, which in turn defines the length of the works. The construction design of the tunnel features four excavation fronts, which will be almost entirely excavated with specific tunnel boring machines (TBM).

The lead-up to this point, however, has been a long a complex process, and one that has required no small measure of co-operation and collaboration on the part of various authorities and institutions.

Argentina and Chile share one of the world’s longest land borders, however, the uncompromising terrain means that existing terrestrial passes are far from ideal

In March 2009 the Feasibility Study (phase one) was presented to both governments and in October the two countries signed the Bilateral Agreement and the Additional Protocol of Maipú, in effect creating the bi-national entity for bidding and regulation of the CBA project.

In July 2011, the Final Project (phase two) was delivered to the bi-national entity, along with the delivery of phase two studies, and an audience was held with the President of Argentina, Cristina Fernández and Chile’s Sebastian Piñera.

After the delivery of the technical proposal to the binational entity in July 2011, a project review period was undertaken by both states and in March 2012 the presidents of Argentina and Chile began feasibility tests for the project, and started developing the basis for the bidding process. In April 2012, 160 comments on the technical proposal were delivered to the proponent and initiator, and incorporated into its overall make up.

During this six-month review period, several joint meetings were conducted, which together served to deepen the discussion about the proposed project (geological studies, base tunnel design, tunnel safety, tariff analysis and willingness to pay by CBA users, demand study complementation, and a legal feasibility study).

An innovative business model
The CBA project in its entirety is innovative on several counts; namely that it is the first time a private consortium will present a project of this kind to the public sector. This “private approach” comprises a 10-year construction planning line and a 50-year operation concession within a binational legal and political framework.

Project is declared of Public Interest to Chile and Argentina

In the proposed Business Model and Guarantee Scheme, the private parties will assume the risks of their capital investment while the Argentine and Chilean States offer certain guarantees and contingent risks to make clear their commitment in facilitating the long-term financing required of this project.

Argentine holding Corporación América has formed an international consortium to implement and finalise related feasibility studies. Together with Corporación América, this group includes Empresas Navieras of Chile, Mitsubishi Corporation of Japan, Geodata SpA of Italy and Contreras Hermanos from Argentina. The incentives outlined in the CBA business model are designed to enhance the long-term concession scheme for both existing and future consortium members.

The design of this financing structure is based on a shared risk model and guarantee system, which is in turn based on successful experiences in the region with the backing of multilateral credit organisations (MCOs), and is focused on easing and simplifying the risks shared between Chile and Argentina.

For one, there it creates an incentive for the private sector to propose and design new mega infrastructure projects so as to ease infrastructural bottlenecks, and there is certainly more conceptual freedom in the planning and construction space. There are also incentives for stakeholders to optimise the long-term success and efficiency of the system, while the project’s financing guarantees minimal fiscal risk for the state, and cuts the overall costs of the project.

No matter the means by which it is accomplished, the Bioceánico Aconcagua project aims to afford goods travelling through Chile and Argentina a far more efficient route through the Andes and greater commercial ties than ever before. The upshot is that not only the trade between Chile and Argentina will no doubt rise, but the trade between the countries of the region as well.

Perhaps the greatest physical and commercial void to be broached by CBA is the Bioceanic factor, cutting down shipping costs and times for Brazilian and Argentine goods seeking Chilean ports and Asian markets, and Chilean and Asian exports aimed at the Mercosur commercial hubs and ports.

However, what is key about the project is the financial terms and conditions that underpin its development, as they represent the sheer scale of what can be achieved if private and public parties work to settle differences and minimise risk.