Moving Kiruna: what does it take to relocate a city?

The irresistible call of the world’s biggest deposit of iron ore is forcing the Swedish city of Kiruna to move two miles east, signalling a new beginning for its citizens. But can this groundbreaking project succeed with so much at stake? 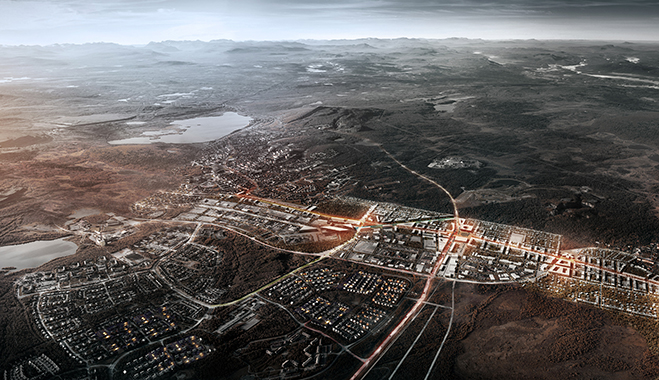 An aerial shot of the proposed Kiruna once it has relocated away from the mountainous region rich in iron ore
Infrastructure | Project finance
Author: Rhys Thomas

As the northernmost city in Sweden, Kiruna is used to seemingly endless winters, short, cold summers, and relative isolation in the vast expanse of Swedish Lapland. Its population, just shy of 20,000, has learned to expect adverse weather and the long dark night that descends on the city between December and January – all things that are part and parcel of living some 90 miles above the Arctic Circle. They could not have expected the gravity of the newest challenge that the city faces – a problem that simply must be overcome, before it swallows it whole.

When state-owned Luossavaara-Kiirunavaara Aktiebolag (LKAB) – one of Sweden’s biggest mining companies – told the residents of Kiruna it needed to dig deeper into the mountain near the city to extract more iron ore, some eyebrows might have been raised. Veterans of the city would remember that in the 1970s rampant expansion forced the city’s Ön district to be vacated and the residents moved elsewhere.

What they probably didn’t realise was the scale of what would have to happen this time. LKAB didn’t want one district to be vacated. They wanted at least a third of the city moved to a different site – every house, hospital, school and shop in the chosen areas – and every citizen affected would have to relocate with it.

Already the effects of the digging can be felt around Kiruna. Cracks and fissures tiptoe closer to the city every month, threatening apartments and homes. The townspeople simply cannot afford to stay put any longer, that much is certain, but the alternative seems an impossible and costly task.

The call of the earth
LKAB’s mine at Kiruna is the largest iron mine in the world, extracting 75,000 tonnes of iron ore every day, and the prospect of even richer veins made digging deeper an easy decision for the company. LKAB believe that the orebody stretches below much of the existing city and is more than 2000 metres deep and four kilometres in length – the largest known continuous body of iron ore in the world – and enough to ensure mining operations will continue in Kiruna until at least 2035.

There is some irony in the situation: the very vein that brought Kiruna to life is now threatening to destroy it, unless the relocation plan succeeds. This sort of situation is not entirely new for the company – on a much smaller scale LKAB have been moving residents away from their mining operations in the nearby town of Malmberget, literally “The Ore Mountain”, for the best part of 60 years. The relocation of Kiruna, however, is a much greater test for the company.

The value of the orebody below the city also makes the decision more of an economic certainty, but it is entirely possible that the true cost of the relocation for LKAB will never emerge

The current population are desperate for stability – both above ground and under it. Moving all the residents to new houses will be a big endeavour. Where LKAB can they will try to move the properties themselves to a new lot, but otherwise the company’s normal policy is to compensate by purchasing the house for the market price plus an additional payment for a variety of factors, including the value of the ore beneath the land. The exact nature of the compensation package is extremely fluid and depends on a variety of factors, including property value and market movements.

The Swedish Minerals Act puts the responsibility on the mining company who causes the damage to compensate for it, but the law has never been applied to such a large swath of properties before now. LKAB themselves admit that there “are hardly any comparable situations from which we can learn.” This is obviously a massive financial undertaking; at the end of the 2010 financial year the company had spent €2.1bn on the transformation so far and had made a further provision for €3.4bn more to be spent.

The company believe they can handle the cost, citing the prolonged period of the relocation. The value of the orebody below the city also makes the decision more of an economic certainty, but it is entirely possible that the true cost of the relocation for LKAB will never emerge.

Fresh start for the city
Architects White Arkitekter AB won the competition to design ‘New Kiruna’ with their ‘Kiruna 4-Ever’ campaign. Their vision is impressive. The new city will capitalise on the move by becoming more pedestrian friendly and less reliant on cars. The new buildings will try to preserve as much of the city’s original aesthetic as possible. There are select buildings from the old city that are simply too valuable to be demolished. The church, voted in 2001 as Sweden’s most beautiful, will either be dismantled and rebuilt brick by brick on the new site or lifted and transported in one piece.

The transformation will take place over several years, first by extending the main street to the east to accommodate the new developments while also maintaining some structure for the city. Bigger building projects, such as the new city hall and railway station will be sited where land deformations will never damage them.

The architects confess that some developments in the mid-term will be earmarked from the very beginning to be removed as the mining continues. As Kiruna’s municipal government concede on the town’s website, planning for the city is difficult with this “permanent uncertainty”, but the current plans aim to future proof the city as much as possible.

The planners also see this as a possibility to give Kiruna a new social identity. As their plans outline, “Kiruna’s true nature will always be related to iron extraction, but it is precisely the collateral effects of this enterprise which opens [the city] for opportunism”. Architect Mikael Stenqvist, speaking to World Finance about the implementation of the project, said that White were “very confident, but still the survival of the town is at risk”.

He emphasised that “a 100 percent guarantee can’t be made…there are several aspects making the project complex. The world demand on iron will have an effect, and there is a risk in the execution, of how people will react.” Stenqvist remained upbeat about the project, however, saying that it has “a force of expertise that is covering every aspect of the relocation.”

Several developments are already taking place. The city’s local lake, Luossajärvi, has had a dam built and its southern section drained in anticipation of more ore excavation. A new railway has been built to service the mine and provisions have already been taken for the rerouting of the E10 road – a major link between Kiruna and the Baltic port of Luleå.

The world is watching
The project will also be keenly observed by those planning the future of some of the world’s most vulnerable cities. If rising sea levels force whole towns and cities from their current location, what is happening at Kiruna will surely be seen as the first real-life instance of the relocation of a major urban area. That means there are high stakes for the success of the project, because no matter the outcome for Kiruna it will become an example of what works and what does not for the rest of the world.

If rising sea levels force whole towns and cities from their current location, what is happening at Kiruna will surely be seen as the first real-life instance of the relocation of a major urban area

In a press release, CEO of White, Monica von Schmalensee, said the company was aware of the gravity of the project. “To design what basically is a completely new city is a historic task and an unparalleled opportunity for us as architects. It is a great acknowledgment of our unique way of working with sustainable urban planning.”

Comprehensive public transport will underline the architects’ desire to give ‘New Kiruna’ a more cohesive and environmentally friendly identity. The new parts of the city are slightly closer to Kiruna’s airport, which is a vital hub for tourists looking to explore Lapland. Also planned is a cable car system that will service key points in the city and LKAB’s mine, reducing the need for workers to take their cars.

An ambitious plan to link the city’s energy use with the mine’s is also on the cards – Kiruna will be in part heated by enormous waste heat from the mining operations to create a carbon neutral city.

If everything goes to plan, and Kiruna can execute these grand plans, it will be nothing less than a new lease of life for the mining community, and it will be a landmark case for town, city and environmental planners around the globe to learn from.

However, in their plan, published online, the architects also admit that Kiruna may simply be fated to never stay in one place: “Kiruna is an urban settlement under unprecedented pressure for transformation, a process that, with the continuing global demand for iron, will most likely not stop at the year 2033. More than any other city in the world, Kiruna will never achieve completeness or an ideal state.”