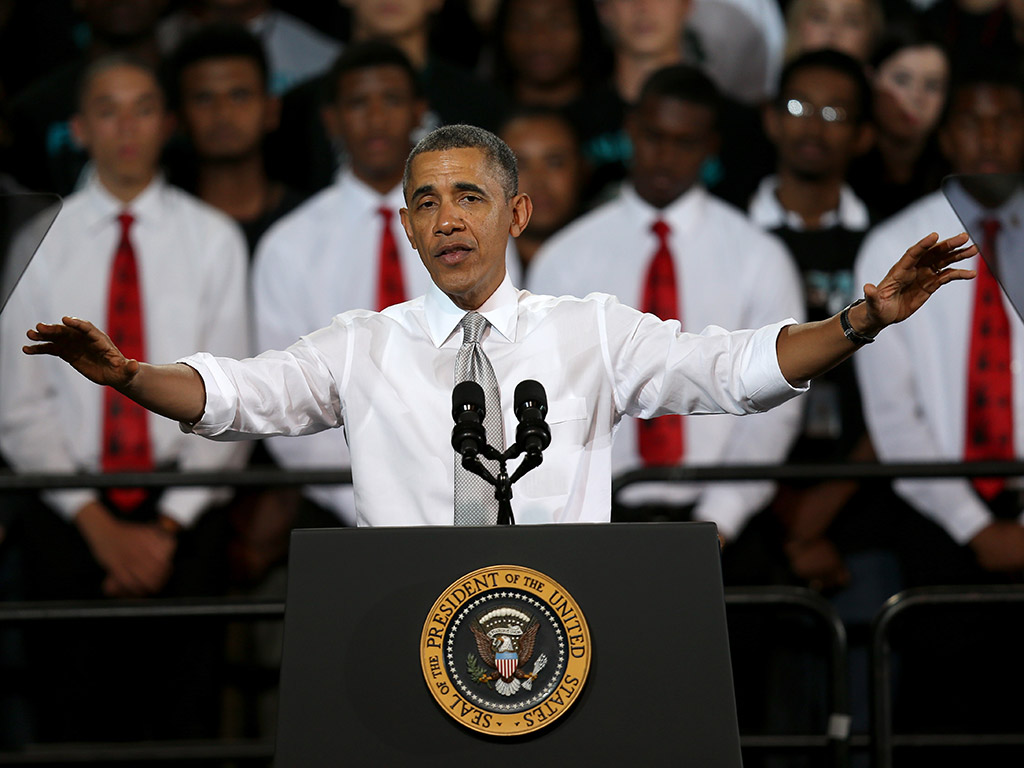 US President Barack Obama, whose plan to expand Earned Income Tax Credit has been praised, but may still struggle to get through the partisan system
Infrastructure | Project finance

Choosing to combat inequality in an age of austerity is a bold move on the part of the US president, and one that can sometimes threaten to bump up state expenditure, strangle SMEs and further widen the deficit. Nonetheless, a buoyant Obama reiterated in December that, “for the rest of my presidency, that’s where you should expect my administration to focus all our efforts.”

The president’s aggressive anti-poverty stance was again on show in his 2015 budget, which included all manner of sophisticated schemes to fight what he believes to be “the defining challenge of our time” – income inequality. His stance is not confined to the bumper policy of a ‘10-10’ minimum wage ($10.10), which has received thumping support from the public so far; the president’s plans also include a proposal to expand Earned Income Tax Credit (EITC) to 13.5 million Americans.

Unfortunately, the wage subsidy angle is often neglected in favour of a focus on higher pay, but the EITC’s effectiveness should not be underestimated, and its superiority over a wage hike is plain for all to see. “There are other steps we can take to help families make ends meet, and few are more effective at reducing inequality and helping families pull themselves up through hard work than the EITC,” agreed Obama in his State of the Union Address.

A brief history of EITC
The poverty prevention mechanism was first enacted under Gerald Ford’s presidency in 1975 and has since been expanded upon numerous times during both Democrat and Republican terms. Although qualifying parties are defined by various parameters, the single most important factor is that the recipient’s earned income falls shy of the living wage. Put simply, the EITC is intended to lessen the burden on low-income working families and individuals; the subsidy amount is dependent on the level of income and number of persons who depend on it.

In 2011, the most recent tax year from which the data is available, the average refund for a family with children came to $2,905, which served to boost wages by $240 a month, according to the Centre on Budget and Policy Priorities (CBPP). In that same year, 28 million working families and individuals received EITC, cementing its stature as America’s largest poverty prevention scheme, aside from the minimum wage.

In 2012, the EITC lifted 6.5 million Americans out of poverty, including 3.3 million children, and the overall number of children affected would have been one-quarter higher were it not for the system. A year later, the EITC and the refundable Child Tax Credit (CTC) together supported 32 million working families and lifted 10.1 million people out of poverty – an incredibly impressive achievement for any one single mechanism.

What’s more, the subsidy is mutually beneficial to both the recipient and the wider economy, in that the refund incentivises individuals to rely not on benefits but on work as their primary source of income. Research shows that the EITC boosts employment, which in turn boosts income, with the Obama administration finding that the subsidy in itself prompts one in 10 parents to enter the workforce that would not have otherwise done so.

Although the system has been incredibly effective thus far, it has largely failed to address workers who are without children but with those same financial pressures. “Right now, it helps about half of all parents at some point,” says Obama. “But I agree with Republicans like Senator Rubio that it doesn’t do enough for single workers who don’t have kids. So let’s work together to strengthen the credit, reward work, and help more Americans get ahead.”

The Florida Republican Senator Marco Rubio criticised the EITC system in January, and urged policymakers to consider wage subsidies as opposed to tax subsidies as a way of reaching more childless workers. “This would allow an unemployed individual to take a job that pays, say, $18,000 a year – which on its own is not enough to make ends meet – but then receive a federal enhancement to make the job a more enticing alternative to collecting unemployment insurance,” he said at an event marking the 50th anniversary of the ‘war on poverty’.

Changes and costs
Under Obama’s new proposals, the EITC will increase its coverage of workers without children, doubling the maximum credit available to $1,000, and upping the income level at which the credit is phased out to approximately $18,000 – 150 percent of the federal poverty line.

The president’s proposal would

Most important of all is that the revised EITC system would lift half a million people out of poverty and significantly reduce the depth of poverty for over 10 million Americans if it came to pass.

Unfortunately, the president’s proposed changes do come accompanied with a $60bn price tag to-be-paid over a 10-year period, which at first glance looks an unachievable sum of money to muster for a government still attempting to cut its deficits. However, it looks as though Obama will attempt to offset any losses by closing a couple of longstanding tax breaks for wealthy individuals.

First is the ‘Ginrich’ loophole – so called after the former Republican House Speaker – which allows self-employed individuals to skirt Social Security and Medicare payments with the establishment of an S-corporation. This set up means that only a select percentage of overall earnings are treated as taxable income, and the rest labelled as company profits.

The second, lesser-known loophole is commonly known as ‘carried interest’, which allows managers of private equity, venture capital and hedge funds to have their salary treated as capital gains, again allowing the individuals in question to opt out of payroll and self-employment tax.

Even if the president can gather up sufficient support to close the loopholes, which looks likely at the present time, questions remain as to whether the public will back the EITC in the same way they have done the minimum wage hike.

EITC versus minimum wage
“I prefer wage subsidies to the government mandating that employers pay higher wages,” says Michael Strain, economist at the American Enterprise Institute. “Wage subsidies have been shown to draw people into the labour force, whereas higher wages through government regulation may result in a smaller workforce.”

The Congressional Budget Office estimates that the $10.10 rise could lift approximately 900,000 people out of poverty, albeit at the expense of some 500,000 jobs. “Wage subsidies like EITC are potentially a more attractive option because they can be better targeted,” says Len Shackleton, Professor of Economics at Buckingham University. “Hikes to minimum wages benefit many people who are not in poverty, and do nothing for those who cannot find work – indeed they worsen their position if they make employers reduce hirings.”

The fundamental difference between the two is that with a minimum wage, the costs are passed on to businesses and possibly consumers, whereas with EITC the costs ultimately lie with the taxpayer. The latter is far superior, however, in the sense that it constitutes a more targeted approach to combatting poverty and begins to tackle some of the root causes of the problem by prompting individuals to take on low-paying positions – many of which remain unfilled.

“The EITC has been very successful at reducing poverty, both by drawing more people into the workforce and by increasing the earnings of low-income workers,” says Strain. “On the other hand, because they are so poorly targeted, minimum wages are not effective anti-poverty tools.”

Upping the proposal’s prospects further still is the fact that the EITC is one rare point on which Republicans and Democrats agree – although Republicans want the tax subsidy to be expanded on in place of a minimum wage rise, whereas the president and his ilk believe both benefits to be essential.

“It would be nice to think it will succeed,” says Shackleton, “but congress appears still to be a toxic environment. Republicans have generally spoken in favour of tax credits rather than minimum wages, but they do cost taxpayers money, and given the Republican hostility to raising taxes, and the antipathy many of them show towards Obama personally, I wouldn’t bet on this proposal succeeding.”

All things considered, the president’s EITC proposal is perhaps better seen as a symbolic gesture in that the vast majority of government spending has already been decided upon by bipartisan agreement. While Obama’s plans are unlikely to come into being, the EITC proposal does act as an essential reminder of the wider issues at hand here: the lack of education and relevant skills to spur social and economic mobility.