The future of the Gulf region hangs on the success of its diversification efforts, meaning shrewd and forward-thinking investment strategies are more important than ever. The World Finance GCC Investment & Development Awards celebrate those that are most effectively driving development in the area 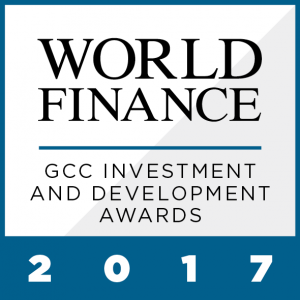 Since last year’s awards, an upswing in oil prices has provided some much-needed respite to the economies of the Gulf Cooperation Council (GCC). While oil prices are nowhere close to the highs seen during the commodity-boom of the 2000s, they were substantially boosted by the output cut instigated in December by the Organisation of Petroleum Exporting Countries (OPEC). Since the agreement, the crude price per barrel has hovered at around $50. And yet, the recent price slump has left its mark on the economies of the GCC, and according to the IMF, growth across the region is projected to reach just 0.9 percent this year.

A pick-up in economic momentum is expected to come into force in 2018, however, with aggregate growth forecast to surge to 2.5 percent. Individual growth projections for 2018 stand at 4.4 percent for the UAE, 3.8 percent for Oman, 3.5 percent for Kuwait and 1.3 percent for Saudi Arabia.

Encouragingly, the IMF’s Regional Economic Outlook noted that growth is being supported by a fundamentally strong financial sector, as well as an improvement in the non-oil private sector. Of course, the financial sector always constitutes an important foundation for economic development, but nowhere is this more apparent than across the Gulf economies, where a huge effort in diversification is crucial to securing future prosperity. Against a background of fast-paced change, there are numerous exciting developments in the investment space across all six kingdoms. The World Finance GCC Investment & Development Awards 2017 have carefully selected those that have been most successful in driving development.

The financial sector always constitutes an important foundation for economic development, but nowhere is this more apparent than across the Gulf economies

A taste of vulnerability
This economic momentum in the short term comes as welcome news, but there are still risks on the horizon. Firstly, while the OPEC agreement was a major breakthrough for oil producing countries, the support it has provided to oil prices could still be undermined by producers outside the agreement, such as those in the US. What’s more, geopolitical forces are creating an externally unstable environment, which could prove damaging for those who have investments outside the region, and could also pose a threat to domestic economic dynamics. Indeed, while an increasingly convincing global recovery appears to be materialising, there are countless uncertainties ahead, including numerous trade disputes and political insecurities. What’s more, the outcome of the Paris Agreement will also be a crucial factor in determining the future of finance for those in the Gulf region.

On the domestic front, it is universally acknowledged that the key to economic sustainability and stability in the area is a stringent diversification plan. As was concluded in the IMF’s outcome document for 2016’s annual meeting of Arab Ministers of Finance: “Greater economic diversification would unlock job-creating growth, increase resilience to oil price volatility and improve prospects for future generations. It would also broaden the base for government revenue, thereby reducing the reliance on oil and making the economy more resilient to oil price shocks.”

This vulnerability to price shocks came to a head during 2016, when a sharp dip in commodity prices led to a subdued year for all six economies of the GCC. Saudi Arabia was hit particularly hard, with growth for the year falling to 1.4 percent, down from 4.1 percent the previous year. Across the entire region, the drop in commodity prices not only acted to stifle government revenues, but also had indirect effects on economic conditions across the region due to fiscal retrenchment and lower liquidity levels in the banking sector.

Luckily, the financial sector was able to escape relatively unscathed and looks set to bounce back. According to the IMF’s Regional Economic Outlook: “For the most part, banks within the region are stable, liquid and adequately capitalised. However, given five consecutive years of subdued growth, along with an uncertain outlook, these banks face a challenging environment, particularly with relatively high levels of non-performing loan ratios.”

A vision for the future
While short-term vulnerabilities are being felt at present, it is the long-term prospects of GCC states that are perhaps the most pressing for investors in the region. From a wider perspective, it is vital to foster the growth of non-oil sectors in order to ensure an economic future for the GCC that will succeed even after oil reserves have been depleted. Crucially, a sustainable source of employment and growth must be generated, which will require continued support and financial backing from investors. It will also require a huge policy effort from governments, as the strengthening of institutional frameworks is a necessity in order to unlock the potential private sector.

As the first edition of the World Bank’s Gulf Economic Monitor report notes, a large-scale challenge for the GCC economies is to implement and sustain structural reforms. Over recent years, every country in the region has initiated ambitious visions for the future. Indeed, the UAE’s Vision 2021, the Saudi Vision 2030, Qatari National Vision 2030, Oman’s Ninth Five-Year Development Plan, the New Kuwait 2035 Strategy, and Bahrain’s Economic Vision 2030 all follow a similar thread, placing a heavy focus on the role of the private sector, diversification and targeted investment strategies. Such reforms will prove a vital foundation for the economic climate of the future.

The recent rise in oil prices has led to an improvement in the fiscal position of the GCC states, which appears to have opened up space for greater policy attention to be directed towards more substantive reforms. Several strategic reforms were highlighted by the World Bank’s special focus report: “Key fiscal and public sector reforms include improving the management of hydrocarbon wealth to insulate the budget from volatility in energy prices and to enhance fiscal sustainability, building more effective and inclusive public sector institutions, reconfiguring the way that oil wealth is shared with citizens to strengthen incentives for diversification, and building safety nets to alleviate the impact of reforms on citizens.”

If such reform agendas are credibly implemented, they will act to boost investor and market confidence. What’s more, the World Bank emphasised that a virtuous cycle could be set in motion, bringing a self-reinforcing combination of stronger investment, including FDI, and output growth.

The World Finance GCC Investment and Development Awards aim to celebrate those that are leading the diversification effort and contributing towards the creation of a virtuous cycle of investment and growth. With this in mind, the World Finance team of in-house experts has scoured the industry and consulted a number of indicators to draw up the final list of winners.