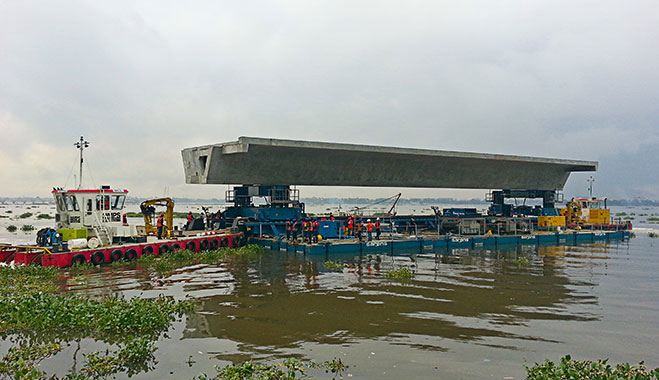 Abidjan has one of the fastest-growing populations in the world today, having doubled in less than a decade from three million in 1996, to more than six million today. This fast growing population has put a lot of pressure on the infrastructures of the city, especially on the two bridges on the Ebrié Laguna.

The Houphouët Boigny Bridge was built in 1954 and the General de Gaulle Bridge built in 1967, and both are considered the most important transport infrastructures in the city, as they are key for mobility between the north and the south.

The bridges also connect the rest of the country and the landlocked northern countries to Abidjan’s port and airport, which are primordial in national and international trade.

Identifying the problem Abidjan’s strong development of the north residential area and the growth of a new urbanisation area have spawned dense traffic congestion all around the bridges, which are close to saturation.

An average of 200,000 vehicles cross the two bridges every single day, so shutting down one for rehabilitation would be unthinkable. The government decided to therefore build a third bridge – the Henri Konan Bridge. The project consisted of the 1,500m bridge construction, with 5.2km of access to the highway. The northern section starts from the François Mitterrand Boulevard to the Laguna. It is 2.7km long, in two-by-two lanes on a non-urbanised site.

An average of 200,000 vehicles cross the two bridges every single day, so shutting down one for rehabilitation would be unthinkable

The project was one of the first West African Public Private Partnership (PPP) projects. The bidding process led in 1998 to the selection of the SOCOPRIM – a company owned by French construction group Bouygues – as the concessionaire.

Negotiations first took place with a group of lenders that included the IFC, PROPARCO, AfDB, BOAD, Bank of Austria, Caisse Autonome d’amortissement and Fonds de Prevoyance Militaire. The law firms White & Case and Chauveau were also involved in the deal, leading to financial closing in November 1999.

Construction work was about to start when the first military coup in the country’s history happened on December 24, 1999. This led to 12 years of political instability, during which it was almost impossible to restart such a complex project.

Countering political instability
The Ministry of Economic Infrastructure tried many times to restart the project, but it was almost impossible to bring private investors in such an unstable political environment. Even the Islamic Development Bank – which decided to be the lead financier of the project at a certain point – withdrew in 2009 because of the high political risk.

At the end of the economic crisis in 2011, restarting the project was a real challenge as most of the financial institutions were still considering the country to be fragile, and also the cost of the project had significantly increased, by 60 percent.

At the end of the economic crisis in 2011, restarting the project was a real challenge as most of the financial institutions were still considering the country to be fragile

For the project to be attractive again, it was required the state to accept to finance €75m. Accounting for this brought up a large internal debate since the country had to face many other urgent expenses including healthcare, utilities, education and basic infrastructure maintenance.

However, for the government the issue of solving the congestion problem in the capital city was rife, and there was a need for a blueprint project that could help built back trust and credibility to the country. The fact that such a renamed contractor like Bouygues was still interested to continue with the project was a good sign.

In 2011, it was the African Development Bank that took the lead as financial arranger and brought around the table FMO, Africa finance Cooperation, BMCE, West Africa development bank (BOAD), and ECOWAS Bank for Investment and Development (EBID).

The total cost of the project is €268m, out of which €75m was financed by the state in September 2011. After June 2012 the project really accelerated when it reached its financial closure.

Today it employs more than 1000 people on the construction site, out of which 90 percent are locally based. The inauguration of the bridge is expected to take place on December 22nd 2014.

Key milestones and challenges
This major project for the country is today a reality thanks to three important events that made the second financial closing possible. The first event was the return of African Development Bank (AfDB) as a lead arranger.

The Islamic Development Bank accepted the lead arranger role but withdrew in 2009 because of high political risk, and so the government had to start from scratch once again. We went to meet with the AfDB directors, and tried to convince them.

It had asked for some costly due diligence before accepting to be part of the project. Fortunately this was not an issue, and AfDB accepted to support the project. The AfDB team played a very important role, as they recruited most of the lenders we have today onto the project.

The second event that contributed significantly to the financial closure of the project was the €75m paid by the State subvention. When the government launched the project in 1996, it was an entirely BOT project. The State had nothing to do with the financing.
But when we restarted in 2009, construction as well as financial costs had increased, and a population impoverished by 10 years of political crisis could not afford to pay a high toll fee. So the government had to put a subvention to make the project viable.

It was very challenging to convince the Board of Ministers to put €75m on the project. It finally accepted, however, creating a tax on fuel, and to use this to raise the funds from the financial market. At the end of the political crisis, the government had a lot of other priorities, and there was not enough funds.

The Third key event was the end of the political crisis. Lenders were very reluctant to put their money on the project during the crisis, but by the end of crisis, we had more money than we needed which increased the financial closure of the project.