The expansion of the As Samra Wastewater treatment plant, an innovative financing initiative to support sustainable implementation and operation of the Jordanian Water Programme, is well underway 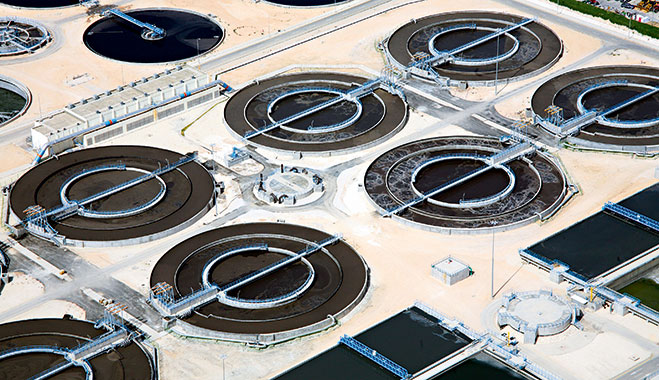 Aeration basins at the As Samra Wastewater Treatment Plant. The basins will be replicated in the expansion
Infrastructure | Project finance
Author: Anne de Pazzis, Deputy Head of BOT Contracts, Degrémont

The Hashemite Kingdom of Jordan faces significant challenges in its water sector due to a combination of scarce water resources, high population growth and increasing demand. The water sector receives special attention from the government and donors because it represents the backbone for integrated socioeconomic development of the kingdom.

Jordan is the fourth most water-poor country in the world. As per Jordan’s Water Strategy for 2008-22, about four million Jordanians (63 percent of the population) are served by sewerage systems producing about 100 million cubic metres of effluent per year that is reused primarily in agriculture. In fact, in 2011, more than 60 percent of crops in the Jordan Valley were irrigated with treated wastewater.

In the medium-long term, with a growing population and increasing demand, Jordan is unlikely to be able to satisfy the corresponding needs from renewable water resources. Therefore, sustainable patterns of water use are being established to meet the requirements of Jordan’s social and economic development objectives, including basic agricultural production. No single action can remedy the country’s water shortages and the Government of Jordan, with the assistance of institutional donors, has launched coordinated actions to increase overall water availability.

One of these actions is the procurement of an expansion of the As Samra wastewater treatment plant (WWTP) launched in 2009 by the Government of Jordan (represented by the Ministry of Water and Irrigation (MWI)). In 2010, the Millennium Challenge Corporation (MCC), a US Government development institution, committed $275.1m for development projects in Jordan, including substantial grant financing toward the expansion of the As Samra plant, among other projects in the water sector.

Awarded in 2002 through an international competitive tender to a consortium composed of SUEZ Environnement/Degrémont and Morganti/CCC, and completed in 2008, the initial As Samra Wastewater Treatment Plant (phase one) was designed to treat the wastewater of 2.3 million inhabitants of Amman. This modern plant replaced the old polluted system of stabilisation ponds, dramatically improving both the quantity and the quality of water available to the downstream agricultural areas that rely heavily on treated water for irrigation purposes. The equivalent of 4,000 farms (10,00ha) are irrigated with As Samra high quality water.

To address the needs of a growing population, the Government of Jordan decided in 2009 to expand the plant, putting in place a 25-year build, operate and transfer (BOT) contract. The expansion project provides for an increase in treatment capacity from 267,000 to 365,000 cubic metres per day, and includes the refinancing of the project company’s existing borrowing. The expanded plant will be fully operational in 2016 and will serve 3.5 million inhabitants of Greater Amman through to 2025. It came into force on July 12 2012 after a long and challenging negotiation.

Investment structure
Investment decisions in the infrastructure sector through private sector engagement, and their implementation, remain a challenge, especially where there is a lack of excludability. Water infrastructures often have high social but an unacceptable commercial rates of return: substantial investments, long gestation periods, fixed returns, etc. It is therefore essential that governments support infrastructure financing through appropriate financial instruments and incentives.

Capital grant as an instrument to make social projects commercially viable is an accepted economic proposition. It can be a challenge though to make it socially acceptable. A diverse mix of financing was required to successfully finance the $270m project:

The sponsors managed to mobilise $175m of debt and equity despite the profound political and social changes taking place in the region and the adverse financial impact these have had on Jordan.

While the events of the Arab Spring did not directly impact Jordan, they had some indirect effects, which in turn prolonged completion of the transaction. Additionally, the contagion of the European debt problems and the implementation of Basel III by international banks always threatened to constrain liquidity for the expansion. The politico-economic climate in Jordan changed dramatically between 2010 and financial close in July 2012:

The expansion would not have been possible without the grant funding from MCC. However, the development of a finance structure to accommodate MCC’s funding conditions presented the sponsors and lenders with a significant number of challenges. MCC was created as an independent government corporation by the US Congress in January 2004 to provide grants to developing countries. Unlike an export credit agency or a multilateral donor, MCC is not required to secure a return on its investments.

However, MCC requires strict adherence to its policies and regulations and many of these had a direct impact on the structuring of the project and finance documentation. As the expansion was the first BOT co-financing with the private sector undertaken by MCC, and also because the expansion was not subject to a competitive tender, MCC was closely involved in all aspects of the transaction. This had a significant impact on the timetable for closing the expansion.

Cost analysis
As with many international financing institutions, MCC will typically seek to select the private sector partner through a open competitive bidding process. However, in the case of the As Samra project, the BOT contract between MWI and the project company (the ‘project agreement’) provided for direct negotiation between the parties in the expectation that the plant would be expanded before the expiry of the BOT contract.

Therefore MCC’s teams developed a methodology to complete a cost analysis on the non-competed proposal of WWTP expansion to ensure that the proposed construction price is based on reasonable cost build up and includes a defendable level of overhead and profit.

The financing was also complicated by the inability of the MCC to enter into any direct contractual relationships with the sponsors or the lenders. The challenges included:

Probably the most challenging aspect of the expansion financing were the conditions that had to be be satisfied by the project company for the drawdown of MCC funding. These are strict, even in comparison to some multilateral disbursement conditions. Lenders would be exposed to a very significant funding shortfall in the event any of these conditions were not satisfied and MCC funding is not forthcoming. This necessitated structuring the documentation in such a way as to mitigate this risk to the lenders. Both the MCC and the lenders were reluctant to fund ahead of each other.

As a result, financial close and satisfaction of the initial conditions of the MCC disbursement had to occur at the same time. A creative solution was devised whereby notices, certificates and drawdown requests were simultaneously exchanged on the day of financial close so as to achieve satisfaction of the conditions for initial disbursement of MCC funds contemporaneously with first drawdown of the debt.

Similarly, the MCC’s ongoing obligation to provide its funding is dependent on the funding commitment of the banks. This resulted in the sponsors having to accept the MCC and lender drawdown tests designed to ensure that neither the MCC nor the lenders are ever in a position where they have funded in excess of threshold ratios of debt to MCC funding and other threshold ratios involving equity investment and cash from operations. Despite these challenges, the grant funding enabled the sponsors to offer an affordable tariff, benefiting the government and local ratepayers without subsidising the private sector.

Government of Jordan represented by the Ministry of Water and Irrigation

Millennium Challenge Corporation; an innovative and independent US foreign aid agency that is helping lead the fight against global poverty

Millennium Challenge Account; a limited liability company owned by the Government of Jordan. It was established in June 2010 to manage and implement the programmes funded by the Millennium Challenge Corporation in accordance with the compact agreement and international best practices

Stakeholder engagement refers to effective communication and coordination with all the individuals or groups who have a stake – be it commercial, financial, political, personal, or otherwise – in the outcome of an infrastructure project. Owing to its complexity and wide-ranging impacts, the As Samra WWTP has a large and diverse array of stakeholders, ranging from the banks that risk capital to politicians who risk reputation, from those concerned about nature protection to the neighbourhood leader concerned about local economy preservation.

As soon as operations started on the phase one plant, attention was paid to the acceptability of newly built infrastructure. Work on perception and expectations started with local stakeholders aiming to improve understanding and knowledge about the plant. Contribution to local development takes place through site visits all year long; the QHSE department of the As Samra WWTP, the municipality and the primary local stakeholders (mainly farmers), jointly define priorities and develop action plans (treatment of insects, sidewalks etc.)

During the planning phase of the expansion, early engagement with citizens impacted by the project provided the opportunity to build consensus around the purpose of the expansion and its benefits. Participants showed interest in job opportunities created during expansion phases, and asked about the accessibility to these openings. Working opportunities for women were explored with special care, identifying the necessary points in the job advertisement to motivate women to apply.

Construction of the expansion started in October 2012 for a total of 36 months; a workforce of about 1,950 workers and staff will be mobilised on site at the peak period. The emphasis was put on clear communicating, whether with politicians or the public. Additionally, a joint recruitment programme was established with the municipality to promote local employment.

The PPP (public-private partnership)/BOT model is well established and understood. What made Samra different was the role and requirements of the MCC that in many instances conflicted with the expectations of the sponsors and the MWI and, to some extent, with the lenders. However, throughout the whole negotiation period, and even now while the construction of the expansion is underway, the Government of Jordan, the MCC and the sponsors worked together to set up this innovative financing.

This was critical to developing a sustainable project with an affordable tariff for the community and the country while offering high performance service. The MWI and the MCC’s trust in the sponsors’ ability to develop the expansion was a key element to the negotiation, and will make As Samra one of the largest and most modern wastewater treatment plants in the Middle East.