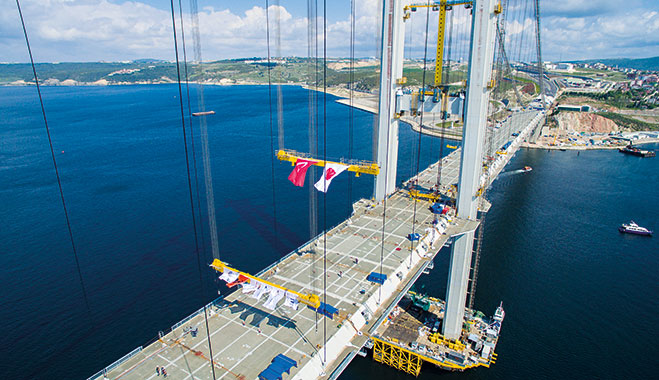 Having undergone something of a transformation in recent times, Turkey has earned its stripes as the 17th largest economy worldwide and one of the world’s fastest growing markets for construction. The government, having invested heavily in infrastructural improvements, has not only created ideal conditions for contractors and consultants, but has given rise to a market of more than $350bn for active construction projects, over a third of which is in the transport sector.

The Gebze-Orhangazi-Izmir motorway, including the Izmit Bay Suspension Bridge, numbers among the most impressive projects to date, and is one of the largest in Turkey to be built using the ‘Build, Operate, Transfer’ model. Under the sponsorship of Nurol, Özaltın, Makyol, Astaldi and Göcay, and the ownership of Otoyol Yatirim ve Isletme, the project is envisaged to cost approximately $7.3bn and is slated for completion within seven years from March 15, 2013 – the effective date of the project’s implementation agreement. The funding for capital expenditure will come from three sources: $5bn in debt, $1.4bn in equity and $900m in net revenue generated from the Gebze-Bursa section, which will open to traffic approximately three years prior to the Bursa-Izmir section.

Detailed project
Due to the size and duration of the construction, the project is divided into phases. This makes planning for construction activities much easier. A 40km portion of the project between Altinova and Gemlik was opened to traffic on April 21, 2016. Construction activities for the remaining sections of the first phase of the motorway from Gebze to Bursa will be completed by the end of June 2016 for the suspension bridge, and by the end of March 2017 for the motorway section between Gemlik and Bursa. The motorway between Bursa and Izmir will be completed by 2020, thus connecting Turkey’s largest city (Istanbul) to its third largest city (Izmir) and the industrial behemoth Bursa, using a modern, high-speed motorway network.

Financing for the project reached a record $5bn in project finance facilities, with a 15-year tenor. The lenders for the project are Akbank, Finansbank, Ziraat Bank, Garanti Bank, Halk Bank, Is Bank, Vakiflar Bank, Yapi ve Kredi Bank, Deutsche Bank, Saudi National Commercial Bank, Bank of China and Siemens Bank. Turkish lenders provide eight ninths of the total loan amount equally among themselves, while the four foreign lenders share the remaining ninth of the loan between themselves. Legal counsel is provided by Clifford Chance and Verdi for the lenders, and Herguner Bilgen Ozeke for the project company Otoyol and its sponsors.

Myriad challenges
The project has been on the government’s books since 1994, and has gone through two previous unsuccessful bids before the current implementation. In order to avoid the same result for a third time, two important concessions were granted by governmental authorities to the project company to facilitate the closing of the project financing arrangement. First was the assumption of debt in case of default by the Undersecretary of the Treasury, and second, a minimum revenue guarantee provided by the General Directorate of Highways. These concessions greatly increased the bankability of the project and gave the lenders the ability to price the loan as if it were a quasi-government bond and model a stable project cash flow, which in turn allowed the lenders to secure an attractive tenor period.

The project initially faced an uphill challenge to obtain sufficient funds. Discussions with potential lenders began in 2010, amid the fallout from the Bear Sterns/Lehman Brothers financial crises, not to mention the Greek Government debt crisis. Negotiations started with a total of 21 lending institutions, ranging from multilaterals to export credit agencies to both foreign and Turkish commercial banks. However, the lack of progress in closing the financing process forced the project company to abandon this path at the end of July 2012.

Instead, the company sought out a smaller and more homogeneous group of eight Turkish commercial banks, and the first financial close of the project was achieved on March 15, 2013, for the amount of $1.4bn for the section between Gebze and Gemlik. A further $600m facility was added to the existing agreement in 2014, to finance the motorway section between Gemlik and Bursa. And finally, in 2015, the existing facility was refinanced and a new loan agreement was signed for the whole project, with the eight original Turkish banks making up the core of the current lending group. An important aspect of the project’s financing history to bear in mind is that shareholders funded the project to the tune of $600m in equity prior to the first loan agreement in 2013, demonstrating their trust and commitment to the successful implementation of the project.

Bridging the gap
The Izmit Bay Suspension Bridge has a total length of approximately 3km and a main span of 1,550 metres, making it the longest bridge in Turkey, the fourth-longest in the world, and the crown jewel of the project, region and nation. The northern and southern approach viaducts connect each end of the suspension bridge to the edges of Izmit Bay. Taking into account the distance of these viaducts, passengers will travel a total distance of approximately 5km to get to land while crossing the Izmit Bay. Once the bridge is operational, it will decrease travel time between the two sides of the heavily congested Izmit Bay from the current one hour and 20 minutes to a mere six minutes.

An important and challenging aspect of the construction of the bridge is the fact the piers are supported by caissons submerged in the bay – a first for suspension bridges built in Turkey. This raised technical, logistical and planning challenges, which were successfully tackled by Japanese contractor IHI-Itochu Consortium, and IHI’s subcontractor STFA of Turkey. Structural steel for the bridge was manufactured by Çimtas, a subsidiary of Turkish contractor ENKA.

The bridge and the adjoining structural steel southern approach viaduct have been designed to behave in tandem against earthquake forces and will be able to withstand an earthquake, estimated to occur once every 2,475 years. Likewise, if the bridge had been constructed during the earthquake that occurred in the region in 1999, design calculations show it would have only suffered repairable and cosmetic damage, without interrupting traffic flow.

Another innovative aspect is the state-of-the-art structural health monitoring system. The system’s sensors are placed strategically throughout the bridge to measure nine different critical components, from displacement to road wear. This real-time information will allow near-instantaneous reactions for safe and efficient maintenance.

Once it is completed, the Gebze-Orhangazi-Izmir motorway will shorten the total route by around 95km, compared to the present state road between Istanbul and Izmir, and will decrease the current travel time of eight to 10 hours to 3.5 to four hours. It is envisaged this will provide $450m-500m in savings per year, and will provide additional stimulus for regional economic growth.

Objectives
A new motorway to shorten the journey between Istanbul and Izmir by 95km, decreasing the travel time to 3.5 to four hours from the current time of eight to 10 hours