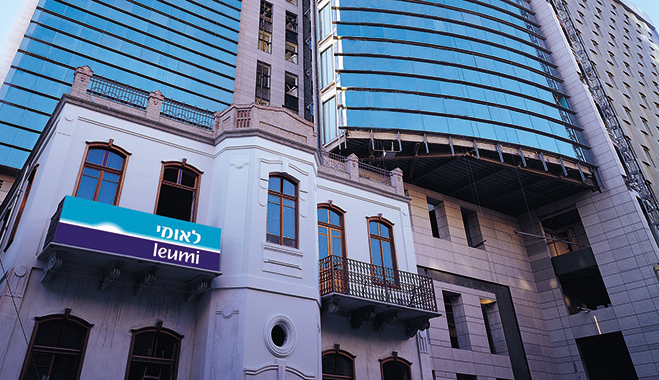 Bank Leumi's headquarters in Israel (above). Although the country already boasts strong economic credentials, the bank believes they could be further enhanced by innovation in the technology sector
Banking
Author: Gil Bufman, Chief Economist, Bank Leumi

The population of Israel is about 8.2 million people, which is similar to that of Austria or Hong-Kong, and its geographic size is small – slightly larger than the state of New Jersey. Nonetheless, despite its small size, Israel has a strong economy, with a GDP of about $292bn in 2013 – similar to that of Finland or Singapore. GDP per capita in Israel is about $37,000 per year, which is relatively high and only slightly lower than that of the UK. Israel’s rate of inflation is low, currently at about one percent per year, and the government’s debt as a percentage of GDP is well under 70 percent.

Israel has a technologically advanced market economy; indeed, its achievements in technology have made it a giant in this sector worldwide. About 25 percent of Israel’s business activities are in hi-tech, and the country enjoys massive foreign investments in the sector. About half of Israel’s exports of goods are of hi-tech nature, and it also has substantial exports of hi-tech services, such as software, cyber-security, research and development and others.

Aside from hi-tech, Israel exports large quantities of cut diamonds, pharmaceuticals and chemicals. Its major imports include crude oil, grains, and raw materials. It also exports services, both in the area of hi-tech, such as research and development services, software services, and also tourism.

The global financial crisis of 2008-09 brought about a very brief recession in Israel, but the country entered the crisis with solid fundamentals following years of prudent fiscal policy and a resilient banking sector. The economy has recovered much better than most advanced, comparably sized economies.

Israel has a technologically advanced market economy; indeed, its achievements in technology have made it a giant in this sector worldwide

Natural gas is expected to play a significant role in Israel’s future energy mix. In addition to ongoing growth in electricity consumption, natural gas demand will be boosted by a preference for natural gas-fuelled power stations, as well as increased industrial usage and possible applications as a transportation fuel.

Israel’s natural gas discoveries have paved the way for the energy independence, as well as significant cost cutting and productivity gains. Aside from the impact on economic activity and the country’s level of competiveness, the revenues that the state of Israel will receive from natural gas taxation and royalties are expected to be significant. Whereas royalties and corporate taxes are incorporated into the government budget, the taxes on surplus profits will be directed to a sovereign wealth fund.

Most upstream investments will not have a significant net effect on domestic GDP because they require few inputs from domestic companies, since major infrastructure projects are contracted to global service providers. However, investments related to the use of natural gas are expected to result in an increase of gross real fixed asset investments. There will be substantial activity related to the installation and maintenance of the systems. In addition, growth is likely to be boosted by various spillover developments such as demand for financial services required as part of the investment process, demand for planning and infrastructure services and also for materials to be used in the process.

The transition to natural gas is expected to result in increased energy efficiency and a reduction in Israel’s energy costs in the long term. This is likely to contribute to the country’s global competiveness and will be particularly important for medium- and low-tech industries that have significant energy needs. Examples of these industries include chemicals, food, rubber and plastics, textiles and paper. Other parts of the economy that are likely to benefit from the accessibility of natural gas include hotels and agriculture. The use of natural gas will help Israeli exporters to increase their global market share and will help manufacturers that are focused on the domestic market to better compete against imports.

Consistent growth
Israel’s real GDP grew by 3.3 percent in 2013 compared to 3.4 percent in 2012 and 4.6 percent in 2011. The slowdown of economic expansion in this period was evident in substantially slower export growth and a major slowdown of investments in non-residential capital, such as machinery and equipment. But despite the slowdown, Israel, an OECD member, has continued to maintain a growth level well above the OECD average (see Fig. 1). The outpacing of Israel’s growth rates compared to those of OECD members has been evident since 2004.

GDP growth in 2014 is not expected to be led by private consumption expansion, which is showing some signs of strain following several years of direct and indirect tax rate increases and also higher housing prices. Higher tax rates have affected the rate of growth of disposable income for many households. Parallel to this, higher rent payments or mortgage payments on newer and more expensive housing has required many households to allocate a larger share of their disposable income to housing services. This has left fewer resources for other types of private consumption. Private consumption is expected to rise by 2.3 percent in 2014, compared to 3.2 percent in 2012 and 3.7 percent in 2013. This rate of increase is only slightly higher than annual population growth of 1.8 percent.

Fiscal policy
The government’s deficit in 2013 was 3.1 percent of GDP, compared to its target of 4.3 percent. The lower than expected deficit was attributed to higher tax rates and also a series of one-off events that contributed to state tax revenues. In addition, government spending in 2013 was safely within the budget framework limits.

The better-than-planned outcome of the 2014 fiscal deficit figure, compared to the official target of 2.7 percent of GDP, is likely to reflect an increase in government revenues that stems from a hike in corporate tax rates, a tightening of tax collection and strengthened enforcement, and also several one-time factors.

Our forecast for the rate of GDP growth in 2015 is four percent. The main factors that are expected to contribute to this growth include: investment in machinery and equipment that make use of natural gas; an acceleration of the housing market and investment in construction; and the ongoing recovery of demand from developed economies.

Long-term economic growth is projected to average a respectable four percent a year, and will be supported by Israel’s high level of technological innovation and its investment in research and development, on which it spends a larger proportion of GDP than any other developed country in the world. Natural gas extraction and its usage will boost the economy over time.