In sub-Saharan Africa, two out of every three people are without access to electricity, and it is this energy poverty that is handicapping the region’s economic development 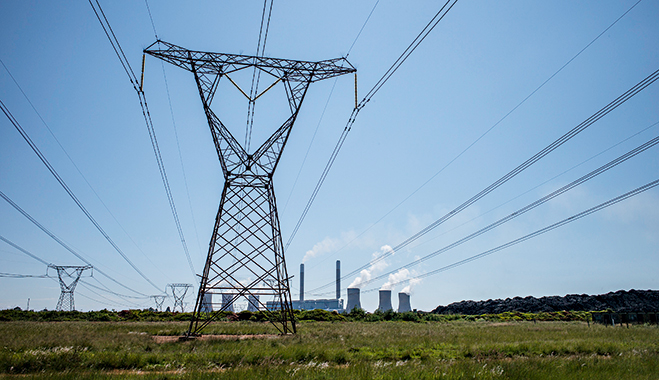 ‘#PowerAlert’ featured prominently on Eskom’s Twitter feed on February 25, as South Africa’s number one utility reminded the Twitterverse that a planned power cut was scheduled for later that night.

Beginning in March 2014, the country has struggled to keep its lights on at all hours, leaving state-run Eskom with no option but to resort to ‘load shedding’: a process whereby the company must impose a programme of power cuts to preserve frankly inadequate supplies. “We’ll keep you updated with regard to any changes. Please continue to use electricity sparingly”, read the firm’s Twitter feed.

The situation, wherein persistent power outages are blighting an already beleaguered economy, bears a certain likeness with that of late 2007-early 2008, when stagnant supplies, coupled with heightened demand, inflicted billions of dollars in lost business on the country. And with the question of when the blackouts might end still very much up in the air, implicated parties are growing increasingly concerned that this same uncertain forecast could drag on for months, if not years yet.

Expansive action
Speaking to Eskom, the company is quick to flaunt its capacity expansion programme, “to ensure the secure and reliable supply of electricity”, and long-term plans to deliver an additional 11,126MW of extra capacity before 2020, “which will help to address the current constraints on the power system”, according to a company spokesperson. Also taking into account that the Medupi and Kusile plants are scheduled to begin commercial operations in the second half of 2015 and 2016 respectively, alongside a Department of Energy commitment to phase in independent renewables producers, and it’s clear that Eskom is not standing idly by.

Millions are forced to live without electricity for as much as 12 hours at a time, meaning that retail, tourism and – most serious of all – SMEs are struggling, and mounting pressure on the rand and a series of downward revisions have done little to lift the mood. Across the country, traffic has piled up, restaurants have stopped taking bookings, and larger companies are complaining that the disruption to their assembly lines could cost them precious business abroad.

Nowhere else has this pressure been more keenly felt than at Eskom, and considering it is responsible for some 95 percent of the nation’s electricity, any setback for the utility is a setback for the population at large. Ageing power stations are ill-equipped to feed the power-hungry population, and a backlog of maintenance works is restraining an already-stretched supply. Whatever the company is doing now to keep the lights on, it’s not enough.

Still, the electricity crisis in South Africa represents only one part of a much broader problem, namely that too many sub-Saharan African nations are without the capacity to support energy demand. And in choosing to focus on exports and immediate GDP growth ahead of economic development in the long-term, host nations are effectively condemning large swathes of the population to poverty.

The provision of modern energy services – defined as household access to electricity and clean cooking facilities – is seen by many as the bedrock on which an acceptable standard of living is built. Without it, affected communities could well find it difficult to access either health or education, and, ultimately, free themselves from the shackles of poverty. In recent times, the spotlight in the energy sector has fallen on climate change, and though curbing emissions is of inestimable importance for the global economy, the focus has detracted somewhat from the larger issue of energy poverty.

“Energy is fundamental to poverty reduction and [a] critical enabler of development”, writes Kandeh Yumkella, CEO of the Sustainable Energy For All initiative in the 2014 edition of the Poor People’s Energy Outlook. “It supports people as they seek a whole range of development benefits; from cleaner, safer homes; lives of greater dignity and less drudgery; to better livelihoods and better quality health and education.”

Studies show that over 1.3 billion people have no access to electricity, whereas more than three billion depend on harmful fuels for cooking. Worse still is that progress on this point will be muted, should policymakers resort to anything short of decisive and game-changing action. One scenario set out by the IEA projects that while 1.7 billion more will gain access to electricity from now until 2030, almost one billion people will still be without it, and 2.5 billion people without access to clean cooking facilities.

Sub-Saharan Africa
Of the areas hardest hit by energy poverty, developing Asia and sub-Saharan Africa are way out in front, and collectively play host to 95 percent of the total population living without electricity. This is despite a healthy contribution to the planet’s crude oil and natural gas production, and an abundance of natural resources to their name, which in itself raises all sorts of questions with regards to management, integration and investment. “Energy poverty matters for the same reason that poverty matters – we have a duty to ensure that those less well-off then ourselves have access to a good standard of living and equal opportunities”, says Richard Bridle, an energy analyst with the IISD’s Global Subsidies Initiative. “Energy plays a big role in this: from mass communications to the refrigeration of vaccines. We don’t usually talk about how the global economy will benefit because that isn’t the key motivation, though economic growth will certainly benefit if we enhance health, education, clean water, sanitation, heating, transport, cooking and communication services.”

Focusing only on sub-Saharan Africa, where the issue of energy poverty is most pronounced, there is a clear divide between the extent of indigenous resources and the electrification rate. Nigeria, for example, is endowed with a plentiful supply of natural resources, not least crude oil (see Fig. 1), natural gas and coal, yet millions of households do not have reliable access to electricity.

The Demographic and Health Survey, published last year by the National Population Commission showed that 56 percent of Nigerian households had safe access to electricity in 2013, only marginally more than the much-criticised 50 percent rate in 2008.

Looking also at the lack of access in rural and urban areas, 66 and 16 percent respectively, what’s clear is that large segments of society are not benefiting from the nation’s rich reserves. However, Nigeria is by no means the exception to the rule, and the twin issues of mismanagement and lack of investment are very much the norm for so many more nations in the region.

In Tanzania, drought has severely handicapped the country’s hydropower capacity and left its population wanting, and according to a recent Solar Aid report, a colossal 85 percent of households are without access to electricity, whereas 77 percent rely on kerosene to light their homes. The same can be said for Mozambique, where a mining boom has brought little in the way of meaningful reductions to poverty.

“Energy poverty has certainly contributed to the slow development progress witnessed in many sub-Saharan African countries”, says Bridle. “There is the cost of traditional biomass fuels: they are time-consuming to collect, taking up time that children and women could put to better use, and the cause of serious respiratory diseases. Then there is the opportunity cost of not having access to modern energy: electricity opens up opportunities for education, entrepreneurship, food and healthcare that can lead to tremendous improvements in standard of living.”

Obstacles to traditional power
The main issues that are preventing the continent’s lower earners from accessing electricity are similar in nature to those inhibiting development at large – with conservative estimates placing the loss at two-to-five percent of GDP per year. While a focus on exports might bring GDP growth in the immediate term, doing so means neglecting the underlying social and economic issues at hand. “A better functioning energy sector is vital to ensuring that the citizens of sub-Saharan Africa can fulfil their aspirations”, says the IEA Executive Director, Maria van der Hoeven, in the Africa Energy Outlook. “The energy sector is acting as a brake on development, but this can be overcome and the benefits of success are huge.”

Whereas 99 percent of North African households have access to electricity, two of every three sub-Saharan African households – that’s 585 million people – do not (see Fig. 2). With 30 percent of all schools and health centres also lacking reliable access to electricity, the energy deficiencies mean more than lost business opportunities, and go so far as to actively handicap social development. True, GDP growth is far and above that in Europe or the US, but an unwillingness to pass resource-derived revenues onto the wider population or reinvest them in infrastructure will do little to lift millions out of poverty.

The IEA estimates that in order to provide universal access to electricity by 2030, an additional $602bn in funding is needed, or $30bn per year. Of the total, 64 percent must come from sub-Saharan Africa, which goes some way towards better understanding the scale of the task at hand. And inasmuch as the vast majority of the shortage lies in rural and often-remote locations, connecting these same underserved communities to the grid can prove costly. For this reason, the focus has fallen less on the grid and more on standalone sustainable solutions, of which sub-Saharan Africa has in abundance. “It is increasingly clear that in some areas distributed renewable energy generation may offer a lower-cost model than infrastructure-heavy conventional energy generation. Many policy-makers are struggling to catch up with this reality and develop new structures for driving investment into decentralised energy”, says Bridle.

For those seeking a new energy frontier, sub-Saharan Africa is still a peripheral candidate, yet investors are slowly beginning to recognise the region’s rich potential. One World Bank report from 2008 showed that sub-Saharan Africa could tack another 170GW of additional capacity – twice what it was then – onto its total, merely by pursuing 3,200 low-carbon energy projects.

Endowed with widespread solar, wind and hydro potential, investors need only take a chance on the region, and, according to the IEA, an additional $450bn investment in renewables could halve blackouts and satisfy 45 percent of sub-Saharan Africa’s energy demands. For example, only 0.3 percent of the sunlight that falls on the Sahara could supply all of Europe’s energy needs, and this is without the geopolitical risks that accompany rival resources such as oil and gas.

Although the progress made so far on this front is modest, there are a number of notable instances that prove momentum is building, albeit slowly. Africa’s first privately funded and developed geothermal plant in Naivasha, Kenya is scheduled to come online in the near future, whereas a giant 155MW PV power plant will increase Ghana’s generating capacity by six percent when it enters into operation later this year. Add to that the DRC’s 40,000MW Grand Inga dam and Ethiopia’s 120MW Ashegoda wind farm, and it’s evident that efforts to boost Africa’s renewable infrastructure are both ambitious and varied in scope.

It’s important that policymakers do not cling onto renewables as their sole saving grace, however, and reduced emissions, while important, should be seen as secondary only to the goal of universal access. The focus so far has fallen largely on converting natural resource-derived revenues into GDP growth, though in order for the region to realise its economic potential, governments must distribute these gains more evenly and, in doing so, eradicate the corrosive issue that is energy poverty.