Through a combination of low wages, good geography and free-trade agreements, many car manufacturers have invested in Mexico. The hope is that this will boost the country’s manufacturing base 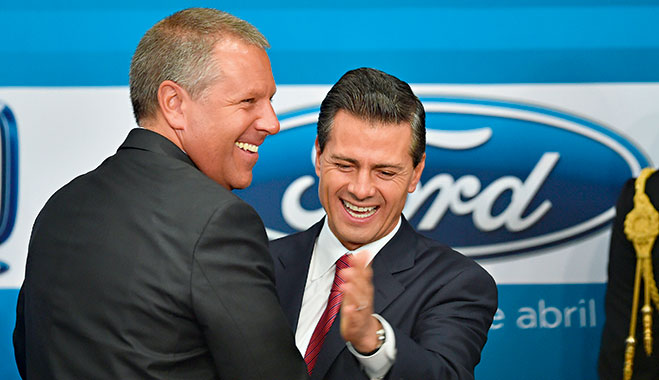 In recent years, Mexico has seen a boom in its car manufacturing and export industry. In the 1980s, factories often straddled the US-Mexico border; assembling cars from parts produced north of the border and re-exporting the finished product back to America. Yet since the 1990s and 2000s, Mexico has seen an increasing number of investments by automobile manufacturers for the production of increasingly sophisticated car parts and assembly plants, setting it on track to become a major centre of high-value manufacturing.

Toyota Motor Corp announced in April 2015 that it would construct a manufacturing plant in Mexico –costing $1bn – to build Corolla compact cars. Soon after Ford said it would be building and expanding (at the cost of $2.5bn) its engine and transmission factories in the northern and central states of Chihuahua and Guanajuato, and create another 3,800 jobs.

This is part of a wider trend of increased investment in the automobile industry, and manufacturing in general, in Mexico. According to Professor Mark Aspinwall, an expert in Mexican politics at the University of Edinburgh, “Mexico has received enormous quantities of inward FDI, especially in manufacturing in the past 20 years.” Much of this has been in the automobile industry and many of the world’s leading car manufacturers are looking to Mexico.

Sean McAlinden, Vice President for Research and Chief Economist at the Centre for Auto, tells World Finance that “Audi, BMW, Mercedes, Infiniti, and now maybe Land Rover have all announced or are about to announce new assembly lines in Mexico where Cadillac’s and Lincoln’s are already built.” Of late, McAlinden continues, “$25bn in new automaker investment has been announced for Mexico in the last four years – the new Mazda and Honda plants are already up and running.”

Occupying a relatively thin strip of the Americas, Mexico is a prime location for shipping exports

According to Christopher Wilson, Senior Associate at the Wilson Centre’s Mexico Institute, “this is just the latest in a long line of investments in Mexico’s auto industry. Over the years, Mexico has built out its supplier base for the auto industry and it has become one of the most competitive auto-makers on the planet.”

Free trade in a good neighbourhood
Mexico is a desirable place for car manufacturers to invest for a variety of reasons, perhaps the most glaring being the proximity of the most prosperous nation on earth; the US. According to the Mexican Automobile Industry Association, 70 percent of vehicles produced in Mexico are exported to the US. Also further north is the prosperous consumer market of Canada.

Occupying a relatively thin strip of the Americas, Mexico is a prime location for shipping exports. Through the use of its western ports, the country is able to export its products to the booming markets of East Asia, as well as prosperous pacific nations such as Australia and New Zealand, while its eastern ports are able to transport goods to more conventional markets in Europe.

Geography alone, however, is not enough and since the 1990s Mexico has made a concerted effort to liberalise its once closed economy through entering into free trade agreements with other nations. The first major effort to liberalise trade was the 1994 joining of the North American Free Trade Agreement, which has eliminated most import and export tariffs between Canada, the US and Mexico, creating a free market stretching from the Arctic Circle down to the Jungles of Chiapas.

Throughout the 2000s Mexico continued to pursue free trade agreements, and now has a total of 44 with countries around the world, including major economic players such as the EU, Japan and China. “I can export duty free to North America, South America, Europe and Japan”, Thomas Karig, Vice President of Corporate Affairs for Volkswagen of Mexico, tells Forbes. “There’s not another country in the world where you can do that.”

This has given it a comparative edge over the US, both its primary buyer and car-manufacturing competitor in the Western Hemisphere. Mexico’s many free trade agreements allow it to export cars at a much cheaper cost. “For example”, McAlinden says, “a $60,000 Audi Q5 shipped from the US to the EU would face a $6,000 tariff but from Mexico it’s $0 due to its FTA with Europe.”

Exportability is the basis of Mexico’s car industry, as, for now at least, many Mexicans will never be able to afford the cars made in these factories. Whereas America’s once booming car industry was based on its own internal market, south of the border the car industry is geared towards world exports. In the early 20th century Henry Ford paid workers higher wages in hopes of creating an adequate market for his cars. In a globalised world, car manufacturers in Mexico need not make such considerations, and wages remain low.

Despite huge investments from car manufacturers, Mexican workers have not seen much of a wage rise; “auto wages have gone nowhere and perhaps have even declined”, says McAlinden. These low wages also make Mexico an attractive place for investment. “When it comes to small cars like the Ford Fiesta, Mexico has at least a $600-700 labour cost advantage over the US”, says McAlinden. Chronic low wages have been a constant plague of the Mexican economy (see Fig. 1), with years of low wage growth. Dan La Botz, a professor who lectures on global labour studies at City University in New York, says “Today Mexican workers wages are a fifth lower than those in China, among the lowest in the world. As a result of pervasive low wages throughout the country in all sectors, 50 percent of all workers are poor.”

Luis Rubio, global fellow at the Wilson Centre’s Mexico Institute, agrees, arguing “The wages these plants pay are significantly higher than the average pay of workers in traditional industries and that’s why they are so much sought after. The issue is not whether they are higher or lower than in Germany or Detroit but how do they compare with their peers. In other words, what are the alternatives for these workers?”

Manufacturing globally
If wages are low in these factories, one major reason would be the lack of other decent jobs in Mexico’s formal economy. In 2014, over half of Mexico’s non-agricultural workforce was employed by the informal sector, according to The Wall Street Journal. The expansion of the car industry is bringing with it other jobs in the formal sector, hopefully creating more jobs with good pay and raising the wages for those that already exists, as competition between workers for them dampens.

Off the back of attracting and maintaining increasingly technological sophisticated car part factories and high-end car assembly plants, the Mexican Government hopes to turn itself into a global centre for high-value manufacturing. According to The LA Times, the government boasts that “100,000 Mexicans graduate each year prepared for careers in engineering and technology.” Likewise, “the Mexican Government has hired MIT and Oxford to advise them on building an auto R&D sector”, McAlinden says. Ford’s decision to build a transmission factory is a step in the right direction. Transmission factories are technologically more advanced, requiring more skill than many other car part manufacturing processes. The “transmission capacity announcement was impressive because it was thought not too long ago that such advanced components as transmissions could not be manufactured in Mexico”, says McAlinden. “This requires advanced machining and automation. The transmissions will be the latest high number designs (nine and 10 speeds).”

The government’s attempt to position Mexico as a world centre for high-value manufacturing seems to be paying off, with increasing numbers of white collar jobs in automobile research coming to the country, according to John Baron, Chief Executive of the Centre for Automotive Research in an industry report, says The Dallas News newspaper. Further, Professor Aspinwall notes, “Mexico has also seen investment in the aerospace.”

All of these high tech investments create what Wilson calls a “virtuous circle of cluster development”, as more investment attracts further investment. “Once five to six million vehicles are built in Mexico per year by 2018”, McAlinden elaborates, “many other industries will find it lucrative to locate near such an agglomeration including tooling, contract engineering, and some product development – just like China.”

While wages remain low in Mexico and law and order concerns persist in certain states, the car manufacturing industry looks set to remain the backbone of the country’s manufacturing base. Manufacturing in 2014 rose by 3.5 percent and car production rose by a full 10 percent.

Snowballing investment looks set to create a new Motor City south of the Rio Grande; whether or not it will be able to provide the high-paying jobs Detroit’s car plants did in its heyday is yet to be seen.