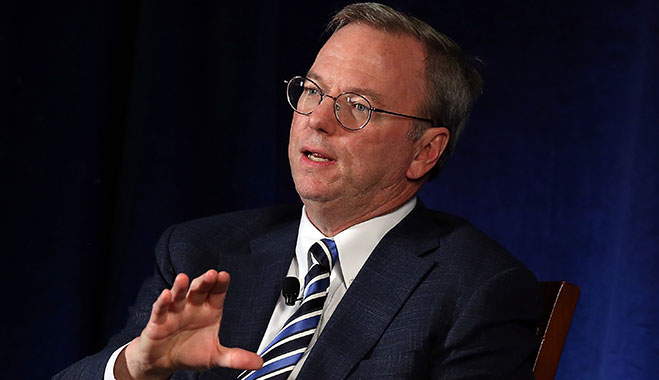 Google Chairman Eric Schmidt raised the burgeoning issue of job automation in a meeting at the World Economic Forum in Davos. According to Schmidt, "it's a race between computers and people, and people need to win"
Strategy

Google Chairman Eric Schmidt addressed leaders at the World Economic Forum in Davos yesterday, where he delivered a speech warning new technologies could threaten increasing numbers of middle class jobs. He also questioned whether workers have the right skills to compete in an increasingly tough market.

Schmidt argued that as technology evolves, the workforce needs to be equipped with the necessary skills. Currently, many workers are lacking the technological expertise to be re-hired, a problem Schmidt believes is likely to endure for the next two to five decades.

“It’s a race between computers and people, and people need to win,” he told the crowd, according to the BBC.

“As more routine tasks are automated this will lead to much more part-time work in caring and creative industries. The classic 9-5 job will be redefined.”

The idea that rapidly advancing technologies will be a big threat to jobs in the future is by no means a new one – but the fact that a senior tech exec like Schmidt is raising the issue is significant.

Tech companies have long since bemoaned the lack of a skilled workforce from which to hire from, and some have even advocated for a change in the skills young people are taught in basic education.

Conversely, Schmidt insisted that it would be a huge mistake not to take full advantage of the efficient new technologies being developed. Jobs must be created.

For the former Google CEO, increasingly jobs will be created by smaller firms, and therefore these entrepreneurs need more support in order to continue hiring- otherwise the situation would only get worse.

“It’s clear to me that we can get full employment, but wages are still depressed,” said the chairman.

Schmidt’s analysis is somewhat worrisome because in a way it officialises the trend of companies striving to cut wage bills, and replacing staff with automation technologies whenever possible.

As a result wages as percentage of economies are likely to continue decreasing, which will ultimately mean demand in the economy will remain low.