Many fear for the future of asset management, with Apple and other world-beating technology companies flirting with the idea of entering the industry 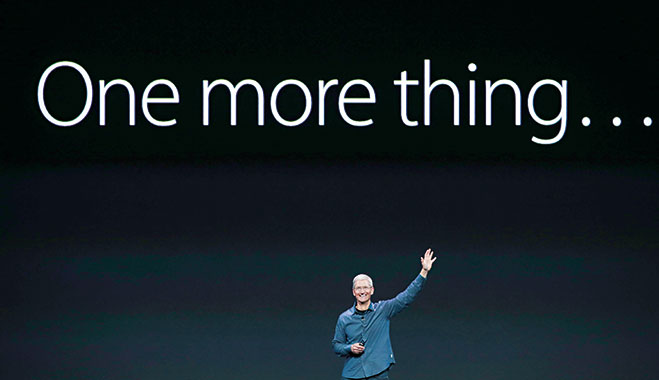 Results from a recent State Street survey showed that, of a 400-strong sample of asset managers, the overwhelming majority felt that the industry stood on the threshold of a new era. Sure, assets under management were on the up and firms last year posted healthy returns, but 79 percent of respondents believed that they’d soon be forced to confront competition from non-traditional markets (see Fig. 1) – namely those in the technology sector.

“Technology players like Google, Apple and Alibaba Group could mount a serious challenge”, according to the findings. “Asset managers also find themselves competing with their clients’ own investment talent, as large investors bring more asset management in-house.” Put another way, advances in technology promise to shake-up the industry, and, in order to survive, traditional managers must either shape up or ship out.

Assets under management last year, for the third time in three years, reached a record high, at $74trn, and profits improved also, yet there are concerns that the costs of doing business are marginalising clients at the lower end of the spectrum. Not to take away from a string of positive headlines recently, the biggest threat to the sector’s stability stems from rising costs; and closer regulatory ties, combined with a growing pool of tech-savvy investors, who have asked that firms do more to relieve the pressures weighing on their bottom line.

Looking at figures compiled by McKinsey, the industry’s cost base is 44 percent greater today than it was in 2007, and while increased profitability points to an asset management business in good health, persistent cost pressures threaten to outpace this growth in the long-term. Worse is that progress on this front has come slowly, and a growing wealthy client base has perhaps obscured some of the issues plaguing the industry’s long-term health.

High entry costs
The ultra-high-net-worth individual (UHNWI) population, for example, has risen 61 percent over the past decade, going by WealthInsight figures, bringing the grand total as of last year to $29.7trn worth, according to the Wealth-X and UBS World Ultra Wealth Report. Owing both to strong economic and equity market performance, the population is greater now than it ever has been, and, looking at the gathering might of the Asia-Pacific region, promises to expand further in the coming years.

An abundance of multi-millionaires means easy pickings for an industry intent on reaping healthy returns, but the rise also means that business at the lower end of the spectrum has suffered. Compounded by a widening wealth gap at the top, a strong conversion rate of millionaires to multi-millionaires and new additions in developing countries, the growing UHNWI population means that firms need no longer rely on lesser investments from lowly millionaires.

Research conducted by the Financial Times this year showed UK consumers now need, on average, £806,000 ($1.26m) to secure the services of a private client wealth manager, 48 percent greater than the year previous. Furthermore, a third of all wealth managers stated that they’d offer advice only to those fronting at least £1m ($1.56m). Prompted by regulatory changes and increased compliance costs both, firms can afford to be picky in a climate wherein costs are rising and so too is the UHNWI population.

“They wanted me to commit to giving them £1m to look after. Their own fee starts at one per cent so that’s like handing them a cheque for £10,000 on the spot”, said one entrepreneur and consultant Holly Mackay, speaking to the FT. “It was basically ‘Hi, here’s a posh coffee and a PowerPoint presentation, now give us a million quid’.” By no means a rare occurrence, the sad truth of the matter is that firms will more-often-than-not choose not to expend the time and expense it takes to serve those with less than a seven-figure sum, and for as long as the market remains as it is, the opportunities for lower end clients will be less. However, where many firms are scrambling to make good on a thriving UHNWI population, just as many are keeping a watchful eye on the wandering bottom half of the market, as well as the technology companies that could profit as a result.

“It is widely believed that the current generation of asset management models and their advisory channels are simply not up to the task of attracting the new generation of clients – especially at the two ends of the age spectrum: those affluent millennials keen on retirement planning and those baby boomers entering their golden years with significant nest eggs”, reads a recent report entitled Why the Internet Titans Will Not Conquer Asset Management. “The asset industry is ripe for a big makeover.”

Technology takes over
Often criticised for inflated charges and a refusal to embrace new technologies, the asset management industry of today is susceptible to any technology-savvy enterprise looking to muscle in on the market. Speaking on the role of technology in asset management, CEO of CREATE-Research Amin Rajan said, “First, it is enabling digitally savvy investors to bypass intermediaries and buy funds directly from asset managers with digital platforms. Second, it’s providing DIY tools to investors that enable them to make asset allocation decisions and undertake follow-up activities.”

With trust in financial services still lacking and an emerging middle class seeking investment advice, the asset management landscape is ripe for change, and it’s in this climate that tech firms, armed with their superior expertise and influence, could support the neglected lower end and even pose a threat to established fund houses.

“We are on the verge of the biggest shake-up the industry has experienced; and the message to asset managers is clear – adapt to change or your business won’t survive”, wrote Tom Brown, Global Head of Investment Management at KPMG in a recent report. “We could see the Apples, Googles, or large retailers of the world becoming the next big powerhouses in investment management.”

As much has happened already in China, where internet giants Alibaba, Tencent, Baidu and even Xiaomi have taken to asset management in the form of money market funds. A relatively minor player in March 2013 managing only $1.9bn in assets, Tianhong Asset Management Co, after teaming with Alibaba and launching a money market fund, reeled in $81bn in the space of only nine months. Christened Yu’e Bao, the fund’s success means that, as of the end of last year, Tianhong controlled a more than 10 percent share of China’s assets under management, with $93bn in assets and 185 million users.

Offering a four to six percent return, rather than the customary three percent offered by banks, China’s budding middle class has ploughed its savings into these money market funds, and the segment has expanded 15-fold in the past four years as a result, controlling $306bn in assets as of the end of 2014. Dangerous on the one hand insofar that a fair share of investors are ill informed about their exposure to risk, the success of internet companies such as Alibaba shows that there are opportunities for non-traditionals not just in China but in mature markets also. Unlikely conquerors
Where traditional fund managers have largely struggled to reel in retail investors, technology companies such as Google for example, which command far more brand loyalty than most in financial services, might find it easier to do so. Regulatory hurdles may well prove too big a hurdle to stomach at the present time, though these same firms may well make a better fist of keeping up with the latest technological developments and, in doing so, keeping to modest operating costs.

Asked whether he thinks more technology companies might enter the asset management space in the future, Rajan said, “Yes, I do. But their disruption is unlikely to conquer the industry. They do not have the risk management DNA that is at the heart of investing. So, they are more likely to form alliances with the incumbents.”

All things considered, the encroaching technology sector is a net positive for the asset management industry overall, and, aside from stoking fears of survival among some fund houses, the development has forced firms to concede that they must do more to accommodate digital consumers. Utilising technology to make wealth management services both more customisable and more cost-effective, firms can ensure also that reporting and engaging with clients is made more transparent.