The idea of a maximum wage seldom gets a mention in mainstream policy discussion, but it should 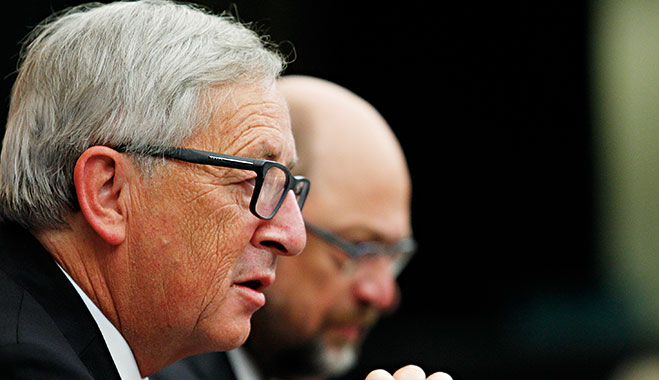 The European Commission’s President, Jean-Claude Juncker. The EC has paid a lot of attention to minimum wage, but not enough to the maximum
Tax | Wealth Management
Author: Matt Timms

The minimum wage debate has captured the public’s imagination not just in the US – where low earners have taken to the streets bearing placards and bad things to say about their employers – but also in Britain, where a recent hike has been likened to a ‘living wage’. In mainland Europe, the EC President Jean-Claude Juncker has made the case for a pan-European minimum, and the German parliament last year approved its first minimum wage on record. Yet the disparity between the one percent and the rest lives on.

The scale and ferocity of the criticism is understandable, given that the ratio of executive-to-worker pay – particularly in the US and in industries such as food services – has come to border on the extreme. Studies show that a disproportionate share of the spoils has been handed to those at the top, creating a toxic societal gap between them and the rest, and without immediate and radical action there may be no end in sight. Athletes, surgeons, software engineers have all enjoyed a fruitful few years in a period where average wages have failed to keep pace with productivity gains. And while much has been made of the minimum wage in closing this gap, far less has been said about the merits of a maximum wage.

“In civilised societies, we set limits all the time”, said Sam Pizzigati, Associate Fellow at the Institute for Policy Studies and chief proponent for the maximum wage. “We tell hunters they can shoot only so many ducks. We tell motorists they can drive only so fast. We tell developers their buildings can only rise so high. We set limits like these to protect our common wellbeing. Enormous concentrations of income and wealth endanger that wellbeing just as profoundly as speeding motorists.”

Dealing with a maximum wage
A wage ceiling in its simplest terms would impose a limit on earnings and could even work alongside a minimum wage as a means of redistributing wealth more evenly within society. A higher minimum enjoys more support than it, and for obvious reasons, given that the former promises immediate benefits for a far greater number of people than the latter. Though a quick look at income inequality shows that the issue is in need of addressing as much at the top as it is the bottom.

Executives at America’s largest firms earn three times more today than they did 20 years ago, that’s according to the Economic Policy Institute, and the effects of this increase mean that the income share of the highest one percent has doubled in the space of three decades. Last year, those heading the country’s 350 largest companies took home on average $16.3m, up 3.9 percent on last year and 54.3 percent on 2009, whereas earnings for the average employee were stagnant throughout.

Executive pay over this same period has ballooned at a rate 90 times that of the average worker, and the ratio of executive-to-worker compensation today stands at over 300, up from 25 in the 1970s. Those not necessarily opposed to the increase argue that a special talent deserves no less than an overstuffed pay packet. However, a look at the stock market shows that shares rose at half the rate of executive pay, which would suggest the rewards have outstripped performance.

What form a maximum wage might take in tackling this imbalance is uncertain, though early evidence suggests that a cap on pay, irrespective of its format, could apply some much-needed downward pressure on wages for the one percent.

Specific case studies
Despite the immediate advantages of imposing a cap on wages, notable attempts to do just that have failed to get off the ground. The most famous of these was in Switzerland two years ago, when voters overwhelmingly rejected the 1:12 initiative, or Initiative For Fair Pay. Binding votes on executive pay, as well as bans on golden handshakes and severance packages had recently come into play, yet the proposal to limit executive pay proved a bridge too far.

Roche, Nestle, ABB, Novartis are all Swiss companies and all enjoyed a CEO-to-worker ratio way over 200 in 2012. The call from the ‘no’ crowd was that limiting executive pay to no more than 12 times the lowest-paid worker would hurt businesses much like them. Another often-cited example of a maximum wage in action can be seen in the NBA, where a salary cap was introduced in the 1984-85 season in order to level the playing field.

Fixed at its highest rate yet, at $70m for the 2015-16 season, the cap is expected to still rise higher when the league’s new television contract comes into play next season. This limit means that employment decisions for the sport’s megastars often boil down to factors apart from financials; more than that the cap means that pay for the league’s middling talent is greater, and the ratio of the highest-to-lowest paid players stands at approximately 20:1 as a result.

Going by this example, a wage cap could serve to keep a lid on overly excessive pay packets, and lift wages elsewhere, particularly for the middle-income segment. However, such a system is a complex affair, and a maximum wage for one industry might be entirely inappropriate for another, whereas a cap in one jurisdiction might push affected parties elsewhere.

Levelling the playing field
“Fixed caps have a problem. They leave wealthy people eager to enhance their personal economic wellbeing with only one recourse: to attack the cap, either by cheating on their taxes or going all-out politically to repeal whatever cap may be in effect”, said Pizzigati. “We could lessen this resistance if we set our maximum-wage cap as a ratio, instead of a fixed sum. Going this route would create a healthier political dynamic. If the maximum wage were set as a multiple of the minimum wage, then the wealthiest and most powerful people in our society could see their incomes rise, but only if the incomes of the poorest and least powerful people in our society rose first.”

Discussions on what form a maximum wage might take centres mostly on this model. The premise here is that a lesser wage for those at the top would encourage firms to distribute their earnings more evenly. However, another option – and one that has entered into force before, though not under the banner of a maximum wage – is to introduce something akin to a super-tax so that the reasons for paying out over and above the uppermost tax band are less.

Roosevelt, with fears of war profiteering in mind, proposed a maximum salary of $25,000 – about $365,000 in today’s money – in 1942, with any on more than that subject to a 100 percent tax, though to no avail. A similar tax rate, of say 90 percent for those on a given maximum, would mean that a $1,000 hike for those treading the topmost territory would be worth less than a $1,000 raise for a mid-level employee. The theory is that a taxable rate of this magnitude would incentivise companies to raise wages for those in the middle more so than at the top, as was argued by Matthew Yglesias in Vox recently, and could serve to close the income inequality gap.

“In the United States, we had a super tax of sorts in the middle of the 20th century. Between 1944 and 1964 [see Fig. 1], the federal income tax rate on income over $400,000 averaged around 90 percent. Those years saw America’s wealthiest take home a steadily decreasing share of the nation’s income. But this egalitarian surge could not be sustained. The rich beat it back”, wrote Pizzigati. “To forge a more lasting egalitarian society, we would need to revise our approach to a super tax. We could, for instance, have a new super tax rate kick in at 50 times the minimum wage. In other words, any dollars over 50 times what a minimum-wage worker earns over the course of a year would face a 90 percent tax rate.”

Regardless of the support, or lack of, the devil is in the detail, and imposing a cap on performance-linked pay, for example, could introduce false incentives into the workplace, whereas not doing so might prompt companies to pay out in mostly stocks and dividends. Critics argue that paychecks would find their way into offshore accounts and the concern is that the stock market might suffer without ultra wealthy individuals to partake in it.

Caught between a rock and hard place, the success of any policy – by the name of a maximum wage or another – rests with the ability of policymakers to balance incentives for performance with penalties for any disparity. Perhaps the solution is to link a maximum wage to the statutory minimum, meaning that a hike for either is a hike for all. “The rich, in other words, would have a vested interest in improving the wellbeing of the poor”, said Pizzigati. “I think many of us would like to live in a society with that social dynamic.”