Despite a strong performance in 2017, pension funds still face challenges on multiple fronts. The World Finance Pension Fund Awards 2018 provide an insight into which firms embody the future of the industry 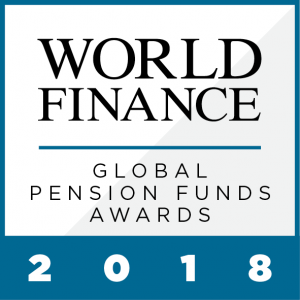 As with the rest of the financial services industry, pension funds are responding to an array of challenges, including keeping up with the rising tide of technological advances and managing a dramatic shift in global demographics. However, last year the value of retirement savings soared to record heights.

Assets managed in institutional pension funds across 22 major markets reached $41.3trn at the end of 2017, up 13 percent on the previous year, according to investment consultant Willis Towers Watson. Last year’s $4.8trn increase in the total value of pension assets was the largest annual increase in dollar terms in two decades.

The number of retirees requiring state and private pensions continues to skyrocket, resulting in fewer working-age citizens for every older person

The World Finance Pension Fund Awards 2018 celebrate the industry’s best and brightest, and those firms that have demonstrated an ability to innovate and adapt, all while maintaining a standard of excellence.

Demographic crunch
Japan is not the only country grappling with a demographic crisis. In virtually every nation in the world, the number and proportion of older people in the population is growing, according to the UN. The issue is set to become one of the most significant social transformations of the 21st century, the organisation said.

Advances in medicine, nutrition and sanitation have boosted life expectancies in 2018 to highs of 84 years in some countries. This paired with falling birth rates has caused the proportion of pensioners in societies around the world to swell.

The Organisation for Economic Cooperation and Development (OECD) said in a report last year that in the future people will have to postpone their age of retirement to ensure a decent pension, as the pace of public spending on pensions for the OECD as a whole is expected to slow substantially. Under legislation currently in place, by 2060, the normal retirement age will increase in about half of OECD countries, by 1.5 years for men and 2.1 years for women on average, reaching just under 66 years. In addition, expected advances in longevity mean the time people spend in retirement will also increase.

As the number of retirees requiring state and private pensions continues to skyrocket, resulting in fewer working-age citizens for every older person, the global pensions system is coming under immense pressure. Governments around the world are challenged with ensuring pensions remain financially sustainable and workable through the transformation.

Technological breakthrough
In its annual report, Willis Towers Watson said the uptake of new technologies in the pensions industry has been “surprisingly light” so far, as evidenced by legacy systems that rely heavily on spreadsheets. The prioritisation of technological innovation has not changed much over the past 20 years, the firm said, but it picked tech as one of the key trends to watch over the next five to 10 years, suggesting a breakthrough is in the industry’s near future.

One way pension funds have already embraced tech is through the rise of robo-advisors. These services provide customers with a more effective and less costly alternative to a human advisor by programming artificial intelligence systems to guide retirees through the pensions system. A report by consulting firm Mercer said robo-advisors have gathered around $225bn in assets under management as of 2017 due to a strong uptake in the wealth advisory industry. That figure is set to rise to more than $1trn by 2021.

Mercer also hinted that blockchain could come into the picture for pension funds, as more and more administrative tasks are being automated. Blockchain technology could remove the need for third-party intermediation and, Mercer said, smart contracts could be established so that when a member reaches retirement age, the smart contract automatically releases
the member’s pension.

But according to a report in The Times, pension funds still need to invest more in fintech in order to engage savers and help them understand their investments. Workplace pensions in the UK started adopting cloud-based platforms in the run-up to the February 2018 deadline for compulsory pension auto-enrolment. Three quarters of employers said they use a cloud-based platform or off-site hosted software. The industry is now looking to adopt more advanced technology to improve income modelling and encourage staff to increase contributions, the report said.

Refocusing the models
Pension fund trustees are starting to understand that incorporating environmental, social and governance (ESG) considerations into their standard investment processes is part of their fiduciary duty, HSBC said in a report last year. The lender noted: “Historically, fiduciary duty was viewed as being applicable only to the financial interests of the funds’ current beneficiaries, rather than those of future generations. This is now changing, with a growing recognition among regulators, law courts, institutional investors and individual scheme members that the interests of future beneficiaries are as relevant to the governance of pension funds as those of current members.”

The consultancy said another area where traditional ways of thinking must change was culture. It said firms should shift from a model of “male, ethnocentric, economics-educated with limited culture” to “multidisciplinary, diverse spectrum of backgrounds with stronger culture”, saying investment organisations increasingly differentiate themselves by referencing
their values or culture.

Another area to watch is governance. “The governance of pension funds has been a growing source of attention fanned by successive industry reviews,” Willis Towers Watson said, though it noted pensions governance is a lot stronger than it was 20 years ago. Despite this, there is a “big governance challenge” to build the resources required to manage a complex organisation.

With this myriad of challenges come winners and losers. The World Finance Pension Fund Awards 2018 identify the companies to watch by highlighting those that are setting higher standards in the pensions industry around the world.