Japan’s relationship with China and Abeconomics were the key topics of Shinzo Abe’s session at WEF, Davos 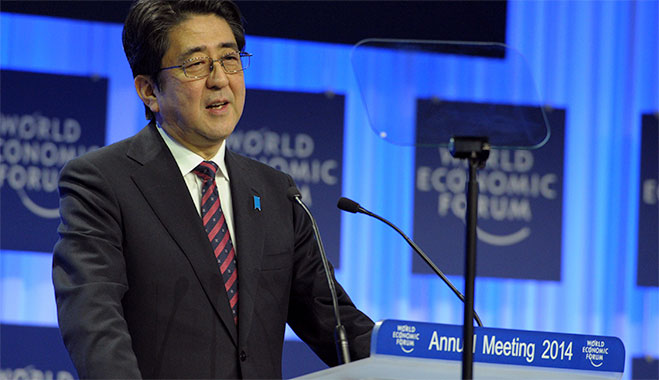 Japanese Prime Minister Shinzo Abe has discussed his country’s fraught relationship with China during a moderated discussion with journalists at the World Economic Forum meeting in Davos.

“Unfortunately with China we don’t have a clearly explicit roadmap,” said the Prime Minister. “There may be some conflict or dispute arising out of the blue or on an ad hoc level or inadvertently.”

Unfortunately with China we don’t have a clearly explicit roadmap

Abe also referred to a “new dawn” rising over Japan, speaking about his “Abenomics”. He alluded to the upcoming complete liberalisation of the Japanese electricity sector and of labour market reforms that are in the pipeline. He also suggested that corporate tax cuts are eminent as well. When FT correspondent Gideon Rachman pressed Abe on the risks associated with his economic policy, the prime minister answered with a golfing metaphor. “He said that like a golfer, stuck in a bunker for 15 years, but reluctant to reach for the sand wedge, in case they over-hit the ball and shot out of bounds,” wrote Rachman. “Now Japan had finally had the courage to use the sand-wedge.”

Abe was also keen to emphasise that much of his plans involve attracting significantly more women into the workplace than ever before.

However, the greater focus of the talk was on Japan’s relationship with China and Abe refused to rule out any conflict arising in the near future.