The Cuban Government has announced it is taking steps to unify the country’s two currencies. It is a bold and challenging undertaking, but it might just come to be the defining achievement of Raul Castro’s presidency 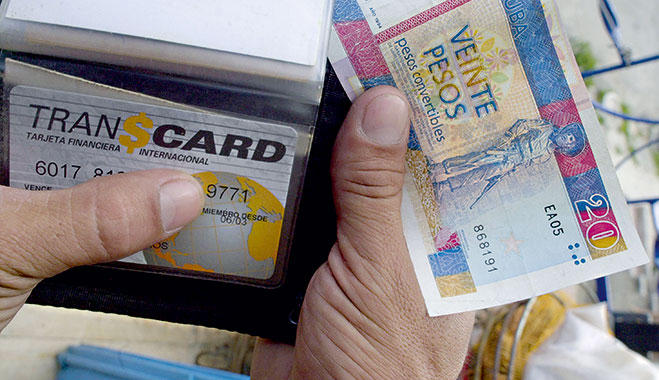 A man holds a peso note. The legislation of the dollar in Cuba has created a two-tier economy and a strong class divide
Banking | Central Banking

Cuba has been undergoing a number of quiet but drastic reforms since Raul Castro assumed the presidency of the island nation from his brother, Fidel, in 2008. The latest, and perhaps most significant step towards modernising the country’s economy has been the announcement last month that Cuba would be doing away with it’s complicated dual currency system.

The arrangement has been very unpopular, and Castro has long since promised a solution, and now it seems like one might have arrived. Since 1994, the country has functioned with two currencies, one pegged to the dollar and one worth a fraction of it. The Cuban Peso (CUP) and the Convertible Cuban Peso (CUC) are both legal tender on the island, though neither are convertible in the foreign exchange markets. CUC is pegged to the dollar and most goods are valued in that currency, but the majority of people in Cuba are paid in CUP.

Restricted access
The complicated system has been used in Cuba since the collapse of the Soviet Union. Cuba had enjoyed an extremely beneficial trade agreement with the Eastern bloc, which had enabled it to bypass US embargos. So when the Soviet Union was dismantled, Cuba was left with limited access to hard currency, economically isolated and facing hardship.

Fidel was forced to legalise the dollar, reversing a decades old law that had made possession of the American currency punishable by prison. It was a momentous decision for Fidel Castro, both ideologically and practically.

The legalisation of the dollar created a two tier economy that split those with access to the dollar from those that could only access the peso. State workers in particular, who were paid very little and in pesos, felt the brunt of this policy. With the dual-currency system, Fidel harboured a change in Cuba that had been exactly what he had fought against for so long; a country split by class, where a privileged minority could access luxury goods and benefit from the burgeoning tourism trade, and an underclass of state-workers who could only access the weak peso.

The CUC was brought in in 2004 to replace the dollar, but for many Cubans that was just a new name for an old problem. At the moment, the government controls almost all prices in Cuba, and companies must exchange their dollars and CUCs at official government exchanges, and neither CUCs nor CUP’s are exchangeable
outside the island.

The unification of the peso was announced by the official Communist Party newspaper Granma, which declared the move is “imperative to guarantee the re-establishment of the Cuban peso’s value and its role as money, that is as a unit of accounting, means of payment and savings.”

A historic divide
In 1994, Fidel Castro was backed into a corner and forced to accept the dollar as a viable currency or risk bankrupting his country, but most experts agree that a dual-currency system can never be anything but trouble. The issue is the exchange rate between the two currencies, which can either be left to be determined by the market, or be set by the local authority.

If the rate is market-determined, a second currency is only a way to inject liquidity into an economy. However, if the rate is set artificially and managed by an authority, the dual-currency system ceases to be dual as the overvalued currency will eventually replace the undervalued one. This is known as Gresham’s law, after Sir Thomas Gresham, a 16th century British financier who famously described the phenomenon: “Good money drives out bad money.”

It is an ancient principle that had been predicted by Nicolaus Copernicus, and even by Greek philosopher Aristophanes at the end of the fifth century BC, before being coined by Gresham. The trouble in Cuba is that the government never allowed the more valuable currency, the dollar, the replace the undervalued currency, the peso, and in that it split the country’s economy in two.

The longer the system was allowed to exist, the more difficult the situation became to resolve, which is why currency unification has been a major goal of Raul Castro’s administration for the past few years.

At the time of the announcement the CUCs value was pegged to that of the dollar, and the CUP was worth around four cents. According to official Cuban statistics, most Cubans make around $20 a month in CUP’s. As the CUP’s are not accepted in most shops – particularly those selling sought-after imported goods – the dual currency system has long since been a major gripe for Cubans, who resent the restrictions.

“The currency unification isn’t a measure that will resolve on its own the current problems of the economy. But its adoption is vital to restoring value to the Cuban peso,” the announcement in Granma read. The announcement did include a date by which currency unification would be completed, but it has been speculated that the whole process might take over three years; the Cuban Central Bank will continue to back both currencies in the time being.

When the currencies are unified, Cuba will likely have to face up to a number of uncomfortable truths about the overall state of its economy. Many issues, such as an endemic lack of transparency and efficiency, have little or nothing to do with the dual currency system. But it will undoubtedly have the effect of improving Cuba’s credibility internationally.

The complete unification of the currencies is many months, maybe years, away from being fully achieved, but it could well be the policy that defines Raul Castro’s legacy as the reformer of Cuba

The news of the currency unification has already led to Russia and Cuba reaching an agreement to write off close to 90 percent of Cuba’s £32bn debt (acquired from the Soviet Union), putting an end to almost two decades of disagreements between the two countries. Though the agreement is still pending approval from the Duma – Russia’s Houses of Parliament – it would be a major step towards rehabilitation of the
Cuban economy.

The deal with Russia is the latest in a string of deals with other countries like China, Japan and Mexico which have helped Raul Castro re-structure Cuba’s active and commercial debt.

“The agreements with China, Japan, Mexico and Russia ease some outside financial restrictions on the Cuban economy and should facilitate trade ties with these countries,” Pavel Vidal, a former Cuban Central Bank economist now teaching at Colombia’s Javeriana University, told Reuters.

“The austerity measures adopted by the Government in 2009, and these accords to lower the foreign debt, help stabilise the island’s finances at a very important moment when a significant monetary reform over three years has begun.” Cuba’s situation is by no means unique, though.

China unified its official and swap market exchange rates in 1994, but the two currencies in Cuba are wound up much more tightly, and will thus be more difficult to fix. A major hurdle will be addressing the value of goods, which have long since been set by the government in dollars.

Though the Cuban Government has not offered details of the transition, it is likely that it will begin with some stores accepting CUPs as well as CUCs. Some state enterprises may start trading the two currencies using pre-set exchange rates. At the moment the rate stands as 25 CUPs to one CUC.

Defining Castro
In its announcement the Government has promised to make good on the peso, stating any of the inevitable devaluations before hand and giving people the opportunity to convert their holdings. It is likely that the new, unified peso will be valued at more than the CUP but less than the CUC, and for many Cubans that will represent an increase in spending power, which in turn could lead to inflation and shortages of some goods.

The Economist reported that big hotels in Havana have been offering to buy dollars, off the book and for above market rates, and that an underground network of currency traders is creeping up around the city. On the other hand, once the currencies are unified, Cuban state companies will be able to stop the practice of pretending that both types of pesos are the same value on their books and balance sheets. Though this practice has helped manage CUP inflation, it has also helped hide the many inefficiencies of state owned companies.

The complete unification of the currencies is many months, maybe years, away from being fully achieved, but it could well be the policy that defines Raul Castro’s legacy as the reformer of Cuba. If it was once feared that Raul would struggle to fill his brother’s shoes as president, it seems that by promoting prudent and timely economic reforms – which Fidel was so reluctant to do – the younger brother will have carved an even bigger name for himself in modern Cuban history.