With a steadfast commitment to its customers, Banco Popular Dominicano has always been a frontrunner when it comes to technological innovation 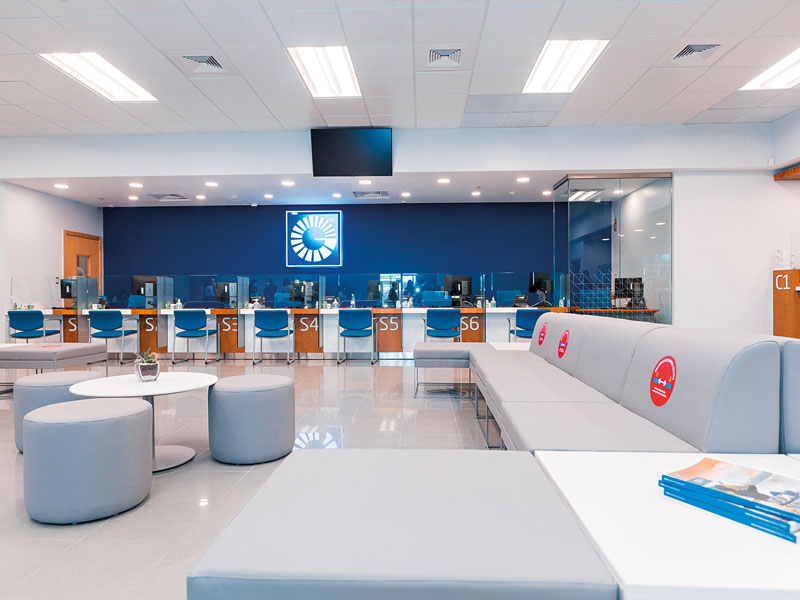 The International Monetary Fund (IMF) is never known to heap praise on countries, particularly developing nations. Yet in early May, the Bretton Woods institution was all over itself pouring accolades on the Dominican Republic. Following the conclusion of Article IV Consultation, the IMF team led by Esteban Vesperoni praised the country for being one of the most “dynamic economies” in Latin America.

The plaudits from the IMF were not farfetched. For over a decade, the Dominican Republic has sustained a robust growth averaging 5.8 percent. The impressive growth, coupled by macroeconomic stability and a sound external position, to use IMF’s words, has resulted in notable improvement in the standard of living for a majority of the country’s 11 million inhabitants. This is indisputable. In 2010, the country’s per capita income was $11,000. By the end of last year, it was around $19,000. Despite the ravages of COVID-19, the Dominican Republic’s economy has remained resilient and is projected to grow by 5.5 percent this year.

The financial services sector has been at the heart of the country’s stellar economic performance by supporting key sectors even during the pandemic. In this respect, Banco Popular Dominicano has emerged among banks that have been committed to supporting the economy. With its wide exposure across sectors like tourism, construction, agriculture, renewable energy, health, education, and SMEs among others, the bank has effectively played a key role in maintaining the economy’s dynamism particularly during the difficult periods.

In the process, the bank has achieved significant growth and today stands as one of the leading lenders in the Dominican Republic. In the financial year ended 2020, Banco Popular Dominicano’s total assets stood at $9.7bn, a 16.5 percent growth from the previous year. During the year, its net loan portfolio grew by eight percent to $5.9bn while total deposits increased by 14.4 percent.

Growth in all parameters has seen the bank rated highly. In May, rating agency Fitch Ratings ratified the bank with the AA + (dom) rating. This was awarded on the basis that Banco Popular Dominicano is “a safe haven bank” particularly in times of systemic stress. The primary reason for this is the bank’s sound business model, stable profitability, healthy portfolio quality, good capitalisation and adequate liquidity management. These factors are critical in ensuring the bank maintains its organic growth going into the future.

Being part of Grupo Popular, Banco Popular Dominicano boasts a rich history dating back over five decades. Over the years, the bank has managed to build a formidable financial institution anchored on innovation. Innovation has been a fundamental pillar that has characterised the bank’s service delivery and growth strategy. For the bank, new technologies and digital transformation have enabled it to continue developing new business models, products and services that have been central to its growth.

Purposeful innovation
For this to happen, Banco Popular Dominicano made a conscious decision to embed innovation as part of its strategic plan. The result has been years of significant investments in establishing a modern open technological architecture that encompasses technologies such as cloud computing, ‘machine learning’ and artificial intelligence. It has also adopted the discipline of digital user experience (DX). This makes it possible to generate solutions to customers’ needs, listen to them and invite them to participate in the proofs of concept, prototypes and pilots prior to launching any product or service.

Technological investments have made Banco Popular Dominicano a pioneer in innovation. It was the first bank in the Dominican Republic to launch an online banking platform back in 2001. A decade later in 2011, it was the first to introduce an app for mobile devices. Other firsts include the introduction of credit cards, incorporation of chip cards for safer transactions, contactless card payments through near-field communication (NFC) technology, virtual wallets and QR code payments. With a wide network of nearly 200 branches and 1,121 multifunctional automated teller machines, Banco Popular Dominicano has adopted the ‘AGILE’ methodology that allows it to constantly launch new innovations and accelerate its digital transformation process. Though designed to ensure the bank maintains its market leadership, the bottom line of its aggressive innovation drive is customer satisfaction.

Building a growth strategy anchored on innovation and digital transformation has brought about significant rewards for Banco Popular Dominicano. Today, the bank is a reference point for financial innovation not only in the Dominican Republic but across the wider western hemisphere. More importantly, the bank takes pride in serving over two million happy customers due to its efficient and customer-centric model of service delivery.

For the bank, which has repeatedly been voted the best private bank in the Dominican Republic, providing customers with platforms and channels that facilitate seamless transactions and interactions has been nothing short of transformative in driving growth. Even more prodigious has been the customer receptivity. This is because the platforms and systems are designed to make the lives of customers easier and help them accomplish their financial goals.

Customer confidence
Almost 1.4 million customers are using digital channels, a growth of 33 percent last year. Annually, the bank receives in excess of 38 million visits to its Popularenlinea website. The bank’s Popular app, the main mobile application in the market, boasts over 700,000 users, a 20 percent increase compared to 2019. In 2020, the app accounted for 24 million transactions, a 34 percent increase from the previous year.

Creating an environment where customers can transact digitally has been a masterstroke for Banco Popular Dominicano in many aspects. It has arguably proved most valuable during the COVID-19 disruptions, a period that has seen the use of digital channels increase substantially. In essence, the growth has been a testament to the customers’ trust in the bank’s technological infrastructure resulting in a swift migration to digital platforms. The migration, on a broader perspective, has helped contain the spread of the pandemic. As the IMF observed, the Dominican Republic has performed well in containing COVID-19. By mid-May, the country had fewer than 300,000 reported cases.

Digital platforms have been central in guaranteeing clients uninterrupted service during the pandemic. For Banco Popular Dominicano, they are also critical for financial inclusion. By taking advantage of the fact that 80 percent of Dominicans own a mobile phone, with about 50 percent of these being smartphones, the bank has simplified wallets and accounts. In effect, it has allowed the unbanked to enter the formal financial services sector easily and quickly. Additionally, through its network of subagents, the largest and most extensive in the country, the bank has brought services closer to most remote communities.

Though a majority of customers are already transacting digitally, Banco Popular Dominicano wants more customers on its digital platforms. This explains why the bank continues to introduce initiatives and incentives for even the most conservative clients, who may be reluctant to migrate. The incentives include not charging commissions on basic transactions such as transfers between accounts, payments to third parties and payments for products and services, among others. Clients also have the option of choosing accounts and products that have no commissions for sophisticated products and services.

Banco Popular Dominicano strongly believes that digital migration is an unstoppable train with more clients experiencing the benefits of digital banking every day. However, it doesn’t mean leaving behind a trail of frustrated traditionalist customers who only know banking in its personalised form in the enclave of bricks and mortar. While conservative customers have traditional channels at their disposal, the bank is constantly making improvements and optimisations to maximise the service experience. One way that the bank has managed to enhance operational efficiency has been through investment in robotic process automation.

In its digital transformation journey, Banco Popular Dominicano understands that customer confidence in security of systems is paramount. Security cuts across two aspects – a guarantee that accounts will not be compromised or breached, and system failures will not cripple the customer’s ability to carry out transactions. It is for these reasons that the bank has strong commitments on security.

Secure and safe
Last year, the bank continued to strengthen its information security and cyber security program incorporating Central Bank of the Dominican Republic regulations. On top of this, it was proactive in the development of technical and procedural capacities for the monitoring, detection and management of cyber security incidents, making use of AI and machine learning technologies. During the year, over 30,000 events were monitored per second. Internally, the measures have put the bank at the forefront of maintaining integrity of customers’ transactions and information. Externally, customer confidence is boosted by a unique electronic key or Popular Token assigned to them for the sole purpose of authenticating each operation. The bank has also set up a digital communication channel through which clients can report ‘phishing and spoofing’ attempts.

Despite achieving remarkable milestones on the digital front, Banco Popular Dominicano has no intention of slowing down or resting on its laurels. It goes without saying that with 17 commercial banks, the top five of which command about 80 percent of the market, the Dominican Republic’s banking industry remains highly competitive. For this reason, coupled with the desire to maintain a growth trajectory, the bank intends to continue innovating and providing clients with new cutting edge solutions that satisfy their needs and make their experience the best it can be.

Priorities for new solutions will be oriented towards the intensive use of advanced digital analytics to facilitate the creation of products, an adequate adoption of AI in banking services and continuing to develop the media. The bank also plans to continue along the road of digital banking in promoting customer convenience. It remains a priority for the bank to always listen to its customers and co-create with them. This will continue to be the underlying principle of its innovations.