The Yukos saga: a timeline of events

In 1995, Mikhail Khodorkovsky, the chairman of Bank Menatep, snapped up a state-owned petroleum company known as Yukos for $309m. Politically well connected, the banker managed to acquire 78 percent of the shares – and a huge nightmare 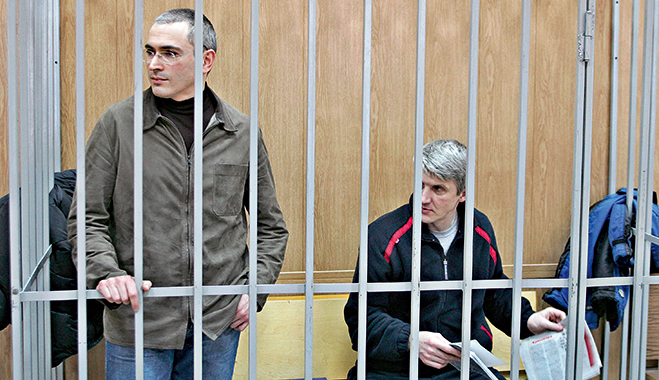 Imprisoned Khodorkovsky, former head of Yukos, and Lebedev, a shareholder, sit in the defendant’s box awaiting trial in the court of Moscow, 2004
Banking

1996
Khodorkovsky installed himself as chief executive of Yukos and built his stake in Bank Mentap to over 90 percent after investing a further $160m. Seen as part of Russia’s new wave of democratic business leaders, the ex-banker appointed five Americans to the board. His credentials were so impressive that former US Secretary of State Henry Kissinger and British banker Lord Rothschild agreed to become joint chairmen of his charity, known as Open Russia.

Early 2003
After narrowly avoiding the bankruptcy of Yukos following the collapse of the rouble, Khodorkovsky steadily turned the company into the fastest-growing oil group in Russia. He pulled a master-stroke by agreeing a merger with rival Sibneft, controlled by Roman Abramovich, one of the youngest of the oligarchs. The deal succeeded in making Yukos not only a giant in the energy sector, but the fourth-largest privately owned company in the world.

Late 2003
The Kremlin began to take a closer interest in the power of Yukos and its chief executive (once a friend of President Putin). Khodorkovsky was listed as Russia’s wealthiest individual. In October, and to the shock of the global energy industry, Khodorkovsky was summarily arrested and charged with fraud and tax evasion. Alarmed by what were widely seen as trumped-up charges against Yukos, the Sibneft shareholders hastily called off the merger.

2004
Khodorkovsky was hauled before a Moscow court and handed a $7.4bn bill for back taxes. Including interest and penalties, the bill would eventually reach an astronomical $28bn.

Although Putin insisted the state had no intention of bankrupting Yukos, its plum assets were quickly seized to pay the outstanding taxes. The ousted management launched a case with Europe’s Permanent Court of Arbitration, seeking $132bn in damages.

2005
Khodorkovsky and his business partner Platon Lebedev were banished to jail in Siberia for a lengthy term of nine years, following what human rights observers described as a flawed trial. Bit by bit, most of the Yukos assets ended up with Kremlin-controlled companies. The production unit Yuganskneftegaz, one of the jewels in the Yukos crown, was effectively valued at $80bn – more than eight times what it fetched at liquidation.

2007
By now most of Yukos’ assets were in the hands of Rosneft, one of the world’s biggest oil traders. Rosnet also happened to be led by Putin’s associate Igor Seltschin. Russian prosecutors hauled the old management back from Siberia, alleging they had stolen more $35bn in oil from the company. As the German business newspaper Wirtschaftsblatt noted: “The break-up of Yukos provides a lesson for foreign investors in Russia.”

2010
The shareholders fought back. They continued to demand almost $132bn in damages: a sum equivalent to more than half of all Russia’s cash reserves. One of their arguments was that Russia was a signatory to an international agreement known as the Energy Charter, which bound the government to pay compensation if it chose to nationalise or otherwise take over private assets, licences or property. The ex-Yukos executives’ sentences were raised to 14 years.

2013-14
The Kremlin freed Khodorkovsky and Lebedev after the European Court of Human Rights ruled certain aspects of the case against them were unfair. In a bombshell judgement, the International Court of Arbitration said the Russian authorities’ actions against Yukos were politically motivated and ordered the country to pay $66bn to the former majority shareholders. Russia has said it will challenge the ruling. Unsurprisingly, Khodorkovsky has fled Russia.