Replacing the ageing Alaskan Way Viaduct will greatly improve economic prospects for those in Seattle and the surrounding area, provided the programme passes without incident 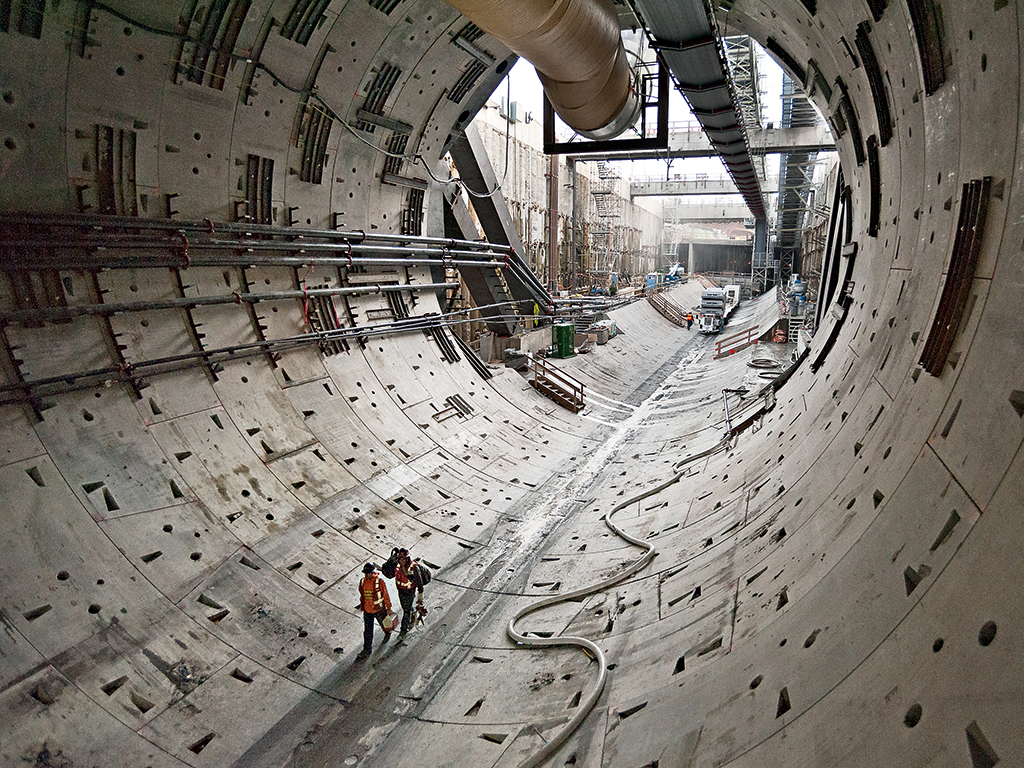 At 10:54 on February 28, 2001 the Nisqually earthquake – otherwise referred to as ‘The Ash Wednesday Quake’ – hit Washington. Peaking at 6.8 on the moment magnitude scale, the 45-second-long tremor inflicted $2bn in damages and injured close to 400 people. Roads were split in two, buildings were torn from their foundations, and the affected area was declared a national disaster zone by then-president George W Bush.

Among the worst hit sites was Seattle’s Alaskan Way Viaduct: a two-tiered, elevated roadway. Following the earthquake, repairs initially cost the Washington State Department of Transportation (WSDOT) $14.5m, but the Viaduct has more recently been the subject of a multi-billion-dollar replacement programme. In the immediate aftermath of the quake, engineers found that the viaduct had sunk several inches and concluded that if the tremor had lasted for another few seconds the structure would almost certainly have collapsed. Fast-forward to the present day and the Alaskan Way Viaduct replacement programme ranks among the most impressive projects of its kind, and amounts to a crucial fix for the region’s long-standing infrastructural deficiencies.

The topmost priorities for the project moving forwards are stability and protection against seismic activity. The original viaduct was believed by some to be in desperate need of construction work, which was made clear over the five years prior to the 2001 quake, when the Washington State Transportation Centre released a summary report entitled Seismic Vulnerability of the Alaskan Way Viaduct. The document, co-authored by University of Washington Professors SL Kramer and MO Eberhard, found that the highway was ‘clearly vulnerable to severe damage and possible collapse in a design-level earthquake’ and in need of vital repair work.

Nonetheless, the ageing viaduct somehow escaped the necessary updates, and safety concerns dissipated as the years progressed. Today, the repercussions for having ignored the warning signs have been picked up by the WSDOT and various agency partners, whose aim it is to deliver a seismically safe and fiscally responsible roadway in place of the original.

“The purpose of the project is to improve public safety by replacing the existing Alaskan Way Viaduct with transportation systems and facilities with improved earthquake resistance and provide efficient movement of people and goods in and through downtown Seattle,” said a spokesperson for the project.

Traffic jam
For over half a century, the Alaskan Way Viaduct has stood fast as the major north-south thoroughfare through Seattle. However, since the viaduct’s construction, congestion has steadily crept up, to the extent that the 60,000-vehicle capacity roadway accommodates close to 110,000 vehicles every day. Due to its proximity to the waterfront and central location in Seattle, the north-south passageway carries 20 to 25 percent of the traffic through downtown Seattle and is crucial for transit and freight operations to and from the surrounding industrial sites and nearby port.

“The Alaskan Way Viaduct portion of State Route 99 is critically important to local and regional transportation,” said one spokesperson for the Alaskan Way Viaduct replacement programme. “Because of its age (more than 60 years), design, and location, a decision was made to replace the roadway with a bored tunnel. This project will also replace the existing Alaskan Way with a new road and is a key component to the redesign of Seattle’s central waterfront.”

Once the Alaskan Way programme is completed two years from now, a two-mile-long tunnel and a number of related developments will fundamentally reshape the way in which traffic runs through Seattle. In short, the replacement tunnel and waterfront improvements will make for a vastly improved roadway through the city and create better economic and social prospects for those living in the vicinity.

Arriving at the replacement tunnel proposal, however, was a process littered with debate and disagreement, as opposing parties argued on the many specificities of an alternative thoroughfare. One proposal aimed to simply replace the existing viaduct with a more stable, larger alternative and to entirely reconstruct the sea wall. However, critics were quick to make clear that deconstructing the viaduct presented an opportunity to better connect the city and the waterfront, and so, after state and local agencies evaluated over 90 proposals, the WSDOT decided on a tunnel option.

“Replacing the viaduct opens up enormous opportunities to improve quality of life in Seattle by increasing mobility through the downtown while making the waterfront more accessible to the public,” said the WSDOT’s programme administrator for the Alaskan Way Viaduct and Seawall Replacement Programme, Ron Paananen. “We need to clearly communicate our design proposals to the project stakeholders and the public – helping them understand and visualise how they can reclaim their waterfront.”

Even so, parties opposed to the tunnel plans continued to put forward the benefits of an alternative solution. And after a lengthy period of debate, the majority finally agreed that, all things considered, the tunnel option was by far the best solution.

“In January 2009, leaders from the state, county, city and port recommended a bored tunnel – along with a host of other improvements – to replace the waterfront section of the viaduct,” says the WSDOT. “It was the only alternative that would allow SR 99 to remain open during construction, maintaining a vital stretch of state highway.”

Digging in
Since construction work on the project began in 2008, just over half of the original viaduct has been demolished and replaced towards the southern end of downtown Seattle. And while some of the lesser tasks, such as column safety repairs and electrical line repositioning, have been completed in full, the biggest development thus far is the tunnelling work, which began in earnest at the mid-point of last year.

Boring a tunnel beneath Seattle, however, is an expensive and technically challenging process, and one that requires highly capable digging tools. Christened ‘Bertha’ by the WSDOT, the resulting custom-built, tube-shaped tunnelling machine is the largest worldwide and now sits 60 feet below downtown Seattle, 1,023 feet along its 9,270-foot journey.

Manufactured in Osaka by Hitachi Zosen Corporation, the machine was ferried in on the Jumbo Fairpartner on April 2, 2013 and reassembled west of Seattle’s stadiums in an 80-foot-deep trench. Beginning July 30, 2013, the 7,000 tonne behemoth set off on its two-mile journey beneath downtown Seattle, only for it to be halted in December, due to seal system issues. Nonetheless, Bertha is scheduled to come back online by late March 2015 pending repair work and upgrades, during which time building work will begin on the one-kilometre-plus of tunnel that has been burrowed so far.

One issue that has taken centre stage since talk of the replacement programme began is financing. The state’s viaduct replacement project will cost an estimated $3.15bn, with funding coming from a combination of state, federal and local sources, together with the Port of Seattle and tolls. Of the estimated $3.15bn, over $2bn has been allocated to the SR 99 tunnel project, and the rest to viaduct removal and replacement projects, alongside various other smaller repair works, management fees and environmental impact studies.

As far as funding is concerned, a little over $1.8bn has been derived from tax, and the rest, tolls excluded, has come from other state, federal and local sources. One major amendment, made in August of last year, relates to the issue of toll funding. Whereas the original 2009 legislature read that the finance plan would include no more than $400m in toll funding, the amount was later revised in 2012 to $200m, and an additional $200m in federal funds were donated to the project to offset the shortfall. Also in August of last year, the Port of Seattle pledged $300m to the project, primarily for programme-related items on the waterfront.

The related street, transit and waterfront improvements are being led by the Alaskan Way Viaduct programme, King County, the City of Seattle, and the Port of Seattle to ensure the project’s social and economic benefits extend to those in the community. The Alaskan Way Viaduct replacement project is more than simply a solution to local congestion issues, but a means of boosting the region as a whole. From new parks and pathways to a new pedestrian promenade and a two-way cycle track, a string of regeneration projects will follow the old viaduct’s demolition in 2017.

The new road is scheduled for completion in 2016, and once opened will remedy long-held safety concerns, ease congestion issues and fundamentally reshape the way in which traffic is carried through downtown Seattle.