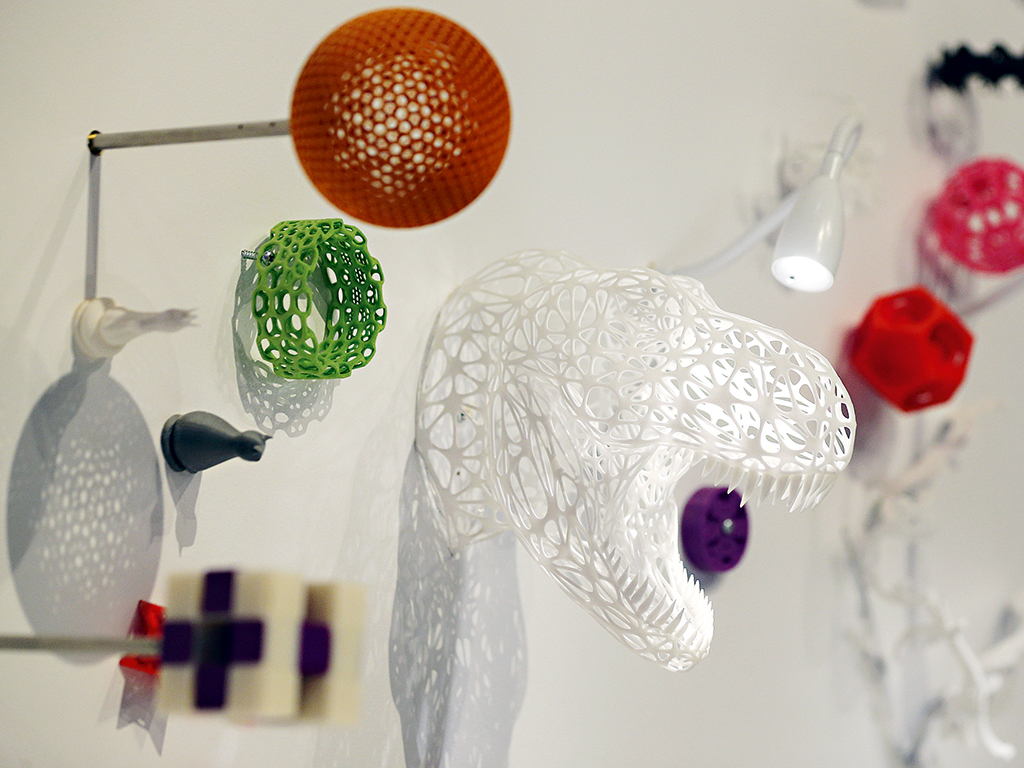 3D printed objects at the Science Museum exhibition. Experts have debated whether 3D printing can completely replace the manufacturing process, with many arguing that the technology is too expensive for that to happen
Infrastructure
Author: Matthew Timms

Cited by some as ‘the next industrial revolution’, 3D printing is slowly reshaping the traditional supply chain, and could conceivably be the single most disruptive breakthrough since progressive assembly. “The fundamental economics of manufacturing changes with additive manufacturing,” says Terry Harrison of the Supply Chain and Information Systems Department at Pennsylvania State University.

Some analysts have pointed out, however, that 3D printing won’t replace traditional manufacturing in its entirety; it will only improve upon a select few components of the traditional supply chain

The traditional supply chain, though it has been much improved over the years, still carries with it a number of glaring inefficiencies, namely: long lead times, high transport costs, complex distribution networks and a dependency on economies of scale. However, a 3D printing alternative represents quite the opposite, in that goods can be locally printed and distributed, with low transport costs to match, leading some commentators to speculate overly enthusiastically about the changing dynamics of traditional supply chains.

Changing supply chains
Additive manufacturing, according to a Goldman Sachs report entitled The Search for Creative Destruction, is one of eight major technologies that will drive companies and business models in the future to either adapt or die. However, 3D printing is still very much in its infancy, and fails to match the requirements of big businesses aiming to improve upon existing products and processes. Should some of the technology’s creases be ironed out, however, the process could well emerge as a viable alternative for organisations seeking to streamline and localise their supply chains.

“Many articles in the popular press lead one to conclude that these large impacts are very near term,” says Harrison. “Our view is that there is significant work ahead before additive manufacturing will realise the kind of potential that is forecast.”

Beginning in the late 1980s and early 1990s, early iterations of 3D printing – or rapid prototyping – were used to create prototypes within a relatively short amount of time. However, the high costs associated with doing so meant the process was off-limits to most, and it is only in the past five years or so that the technology has become affordable for SMEs and even consumers.

Since the technology’s migration to the mainstream – and in particular since 2010 – industries have introduced additive manufacturing to various day-to-day processes. For instance, those working in architecture, construction and industrial design enterprises often utilise 3D printing for prototyping, as do those in the fashion, food and medical industry, to a much lesser extent.

The area in which additive manufacturing will have the biggest influence in the near-term, as has been the case for the past 30 years, is in prototyping. “The biggest advantage of 3D printing is the ability, as I put it, ‘to move from design for manufacturing to manufacturing the design,’” says Pete Basiliere, Research Director at Gartner. “‘Design for manufacturing’ leads to compromises that enable highly efficient and cost-effective mass production, but does not always result in what the consumer or marketer originally requested. ‘Manufacturing the design’ means the ideal design can now be produced, even in lots of one unit, just as the buyer wanted.”

However, some analysts believe 3D printing will have more fundamental consequences for manufacturing. “We are seeing more and more manufacturers extend beyond product development to using 3D printed parts to augment their manufacturing lines and processes,” says Basiliere. “While not a ‘self-replicating printer’, Stratasys’ subsidiaries MakerBot and Solidscape use their parent’s Fortus 3D printers to make the jigs and fixtures used to assemble their own 3D printers. And certainly there are manufacturers who are making finished goods, ranging from Asda’s 3D printed figurines to BMW’s valve stems for its high-end, limited production engines.”

Even so, the technology is still seen as the remit of high-end manufacturing and tech-savvy entities targeting very specific segments of consumers, and with a high price tag to boot. While some predict that the technology will change the way in which certain products are manufactured, most stop short of the opinion that 3D printing will fundamentally reshape global supply chains on a universal basis. “3D printing is ‘a’ new tool ‘in’ manufacture, but not ‘the’ new tool ‘for’ manufacture. 3D printing is great as it requires no tooling, but it is inherently a more expensive, lower quality way of making a part,” says Nick Allen, founder of 3D Print UK. “3D printing will help a lot in the prototyping market, meaning that products can get to market quicker and can be updated faster… so what is being supplied might change quicker, but how it is being supplied probably won’t change much in the near future.”

Opportunity for change
Proponents of the technology argue that 3D printing will play a major part for a much broader base of consumers and could potentially reshape supply chains in the not-too-distant future. Admittedly, 3D printing for certain applications, such as circuit boards and similarly intricate components, is some way off the quality of existing processes, but it could, in theory, play a significant part should accuracy improve and costs fall.

Alongside technological breakthroughs such as advanced robotics and open source electronics, 3D printing is making its way onto the agendas of business leaders seeking to optimise manufacturing and distribution processes. “To compete in this fast-approaching future, companies and governments must understand and prepare for this new software-defined supply chain,” says one IBM report, entitled The New Software-defined Supply Chain.

What’s key in the adoption of 3D printing is that the technology eliminates the need for high-volume production and reduces the waste product that comes with it. Whereas the traditional supply chain relies on the efficiencies of mass production and requires a high volume of assembly workers, additive manufacturing needs little more than the necessary raw material to fulfil any one order and the necessary blueprint to produce it.

As the technology develops, the impact in terms of inventory and manufacturing could be vast, in that a product could be printed immediately on demand and need no longer be stacked on store shelves prior to an order. “These effects are likely to be different for different firms. For some, the effects will be large and for others, not nearly so much,” says Harrison. Clearly there is an opportunity here for SMEs with small order quotas to fill, ridding enterprises of the pressures that come with maintaining a suitably sized inventory at any given point.

The potential for small-scale production runs also means that SMEs will no longer have to pay for expensive moulds, and that smaller orders will not necessarily prove more costly per unit than larger ones.

On the other hand
Some analysts have pointed out, however, that 3D printing won’t replace traditional manufacturing in its entirety; it will only improve upon a select few components of the traditional supply chain.

“Complete replacement will never happen because there are too many items that are made in such high volumes, without any changes from item to item, that traditional, highly efficient, long run manufacturing technologies will always be more efficient and cost-effective than 3D printing,” said Basiliere. “On the other hand, 3D printing revolutionises certain industries, as well as short run and custom production in almost all industries.”

Eliminating the need for mass production also means that companies needn’t look to emerging markets for a more cost competitive workforce. This development marks perhaps the biggest game changer for 3D printing in that it could reshape the global supply chain of today into a new hyper localised model. A tighter supply chain and reduced transportation costs will also limit carbon emissions, meaning that companies looking to improve upon their CSR offerings will be eyeing 3D printing as an attractive alternative.

Although it’s easy to speculate how 3D printing could radically reshape the traditional supply chain, the benefits of the process will only really reap major rewards for smaller companies with a design focus and manageable order base. As far as larger, manufacturing intensive firms are concerned, the technology is some way yet from replacing global supply chains.