China’s economy has been losing steam, and, in a bid to bolster growth, the mainland is on its way to striking a historical trade deal with one of Asia’s leading lights – South Korea 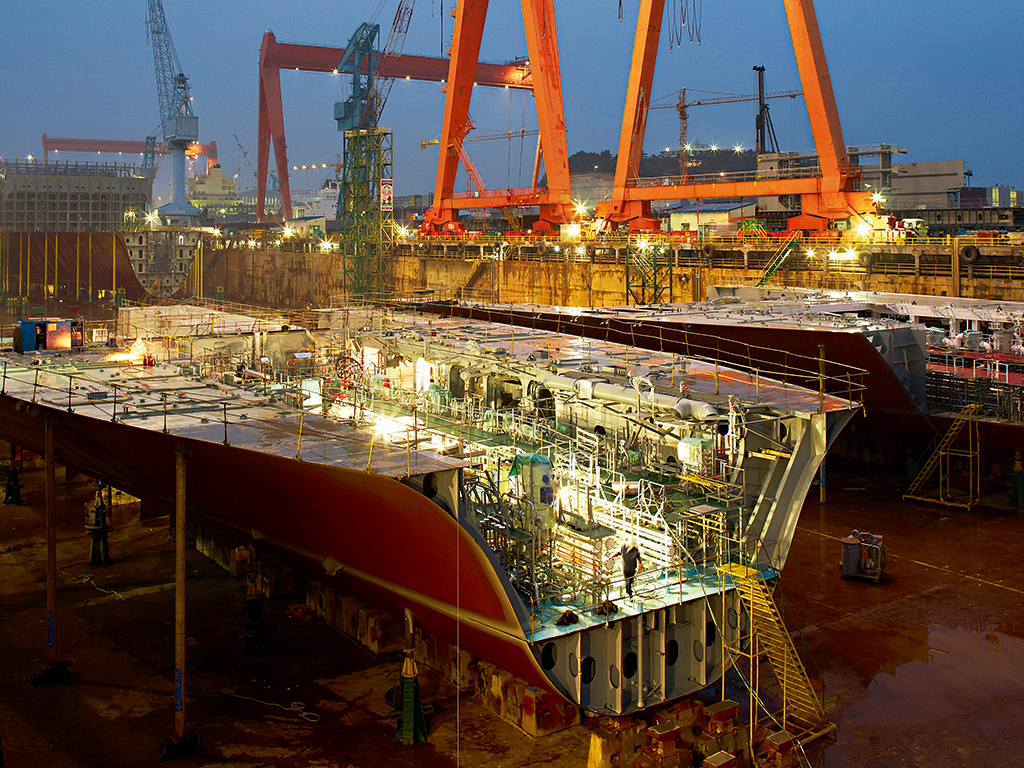 The world’s largest shipyard in Ulsan, South Korea. Shipping has been booming in the country in recent years
Infrastructure
Author: Sandra Kilhof

South Korea and China are making strides towards a bilateral free trade agreement, each country keen to speed up the process in order to tap into the other’s markets. China’s economy has slowed down in recent years, particularly because its industrial development is taking a hard hit now that developed markets are recovering. Meanwhile, South Korea has weathered the financial crisis well, with shipping and tech industries leaping forward in growth forecasts and contributing billions of dollars to the country’s GDP.

In the past two decades, China and South Korea have expanded bilateral economic cooperation and furthered development in their respective markets. Cross-border trade increased by about 35 times from 1992 to 2012: from $6.37bn to $220.63bn. Currently, China is South Korea’s largest trading partner and South Korea is China’s third largest, prompting both to push harder for an established bilateral trade agreement. But obstacles remain before a broad deal can be made, as both parties are still looking to protect their markets from each other.

At the 11th round of trade talks held in China in May, the two countries exchanged a second list of items they seek to exclude from market liberalisation, in addition to an earlier agreement which had seen the two economies protect several of their industries. Of particular concern for South Korea were farm goods, including fishery products, while China is protecting its manufacturing and petrochemical industries. Nevertheless, the countries have already agreed to eliminate import tariffs on 90 percent of all products they trade.

Easing competition
A bilateral trade agreement between the two countries would open up competing exporters of manufactured products to each other, allowing for the trade of key components for markets such as technology and automobiles. For China’s slowing growth, a more open Korean market could be a crucial recipient of goods that are otherwise being hit by the resurgence of the developed markets. Similarly, South Korea’s booming growth will not continue indefinitely, according to economic analysts. China and South Korea’s economies need each other.

“A trade deal between China and South Korea has economic significance firstly. Bilateral trade and investments has developed rapidly in recent years, and both sides want to push forward with this deal. But more importantly, a bilateral trade agreement will have a strategic aspect, in that it will affect East Asian regional dynamics on a security and economic level,” said Professor of International Politics Yongjin Zhang from the University of Bristol in an exclusive interview with World Finance.

A bilateral trade deal could significantly stabilise the Chinese and South Korean economies, which are both largely dependent on exports and have been shaken by the recent improvement in developed markets. China’s exports have fallen significantly according to HSBC’s purchasing manager’s index, which revealed a decrease in growth since the beginning of the year. Conversely, Korea’s PMI has improved slowly but surely since the end of 2013 as improving demand from developed markets is boosting exports and has offset the slowing output to China and other emerging countries.

However, domestic demand and faith in the economic recovery still has some way to go, according to analysts from HSBC and BNP Paribas. In recent investment notes, both firms said that domestic demand would not be strong in 2014 due to a slow recovery of the housing market, making a trade deal that would lower consumer prices and boost exports even more necessary for South Korea.

“Korea’s stronger manufacturing conditions show that its economy remains on track for a gradual recovery. One promising sign for the trade-dependent economy is stronger export orders from China, which is Korea’s largest export market,” said HSBC economist Ronald Man, with reference to the easing of Sino-Korean trade tariffs.

Key sectors
At the recent five-day negotiations, the two countries agreed to open up their online commerce sectors and a series of regulations on competition, according to Korea’s Ministry of Trade, Industry and Energy. With both parties stating that they wished to accelerate the process, the completion of the free trade agreement could be as early as the end of the year.

“It is our hope to reach final agreement by the year’s end. After the March summit, China started to show a more active attitude regarding negotiations in many aspects,” said Woo Tae-hee, Assistant Minister for Trade and chief FTA negotiator, at a press conference following the May negotiations.

Following the most recent trade talks and an improved outlook on exports, the Korean economy has picked up. Junho Ko, Chief Investment Officer at Shinhan BNP Paribas Asset Management, said the South Korean economy will grow 3.8 percent in 2014, as a result of export growth to China in particular.

“The automotive, shipbuilding and banking sectors are likely to outperform on the back of further export growth and consumption recovery,” he said. “South Korean carmakers are planning… to launch new volume-sales models and expand their global production capacity to maintain their top-line growth. Another promising export-related sector is shipbuilding. As the economic recovery continues and shipping finance normalises, new orders of domestic large-sized shipbuilding companies in 2014 are expected to be similar to those in 2013, which totalled $46bn, the second-highest level on record,” explained Ko.

Obstacles to overcome
However, despite talks progressing in recent months, a series of bilateral conflicts and entanglements have served to increase South Korean discontent with China and have slowed down negotiations, which have been underway since 2007. Among the political hurdles is a series of tariff disputes arising from the Chinese flooding of South Korean garlic markets in 2000; the Chinese bombing of Yeonpyeong Island in 2010; Chinese fishermen’s illegal fishing in Korean waters; border and land disputes; as well as China’s North Korean ties. Very few of these issues have economic significance, but they’re definitely taking their toll on the negotiations, which are being held back by domestic opposition to furthering connections between the two countries.

This is exemplified in reports by the East Asia Institute and Asia Research Institute which revealed that South Koreans feel apprehensive about China’s growing influence, despite acknowledging its importance for Korea’s future economic prosperity. Along with North Korean security threats, South Koreans rank China’s continued rise, and their country’s increasing dependency on the Chinese economy, as potential security threats in the mid- to long-term.

“There is a very strong lobby against China in South Korea, and because it’s a democracy, it has to take domestic interests into account,” says Zhang. “This is a deal that is still very much in progress. Whether they can negotiate their very high thresholds remains to be seen, as each country will try to protect [its] economy as much as possible. Manufacturing is still an extremely competitive sector for both countries, and it will be difficult for them to overcome any disagreements on tariffs in this area for instance.”

Pressing ahead
That said, Zhang maintains that South Korea and China will push forward with the FTA despite strategic differences and their somewhat complicated economic relationship. If anything, to help further larger trade deals that could foster much needed economic integration in East Asia.

Ongoing negotiations on a tri-lateral free trade deal between Japan, China and South Korea are currently moving at a glacial pace, with all parties warring over border disputes such as the Senkaku Islands and unresolved issues pertaining to atrocities committed during WW2.

“It would be unnatural if these countries don’t come together, given that they’re neighbours and are so economically dependent on each other,” says Zhang. “They are huge problems with this deal though, especially on a political level.”

And this is exactly where a bilateral agreement between China and South Korea could have an impact beyond their economies. According to Zhang, an intergovernmental trade agreement between the two would make it easier to overcome hurdles in the trilateral talks, as well as promote regional integration and economic development in East Asia which, up until now, has been largely market driven.

A trade deal would make it easier to negotiate bigger deals with Japan and in the future, the Trans-Pacific Partnership. Such deals would provide the East Asian region with economic stability and a greater resilience towards market shocks, ensuring economic development for years to come.