Mexico is transforming its urban housing policy, and with the help of key names such as Infonavit and its CEO Alejandro Murat Hinojosa, the country is seeking to implement more sustainable solutions 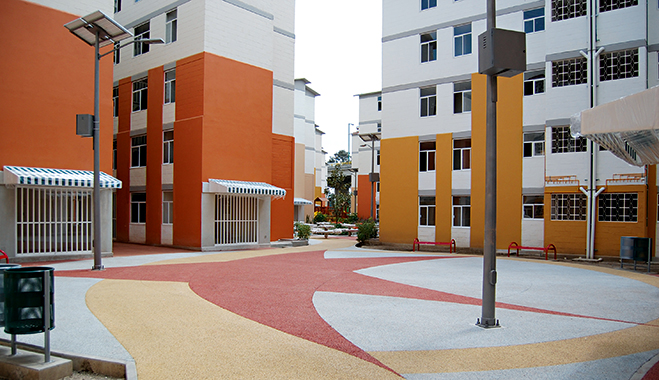 Mexico represents a landmark example of how emerging nations can quickly upend their standing on the world stage and, with the right reforms in place, emerge as something truly impressive. In Mexico, urbanisation has taken hold more rapidly than almost any other OECD country, and by the year 2010 almost 78 percent of the population would go by the tag ‘city dweller’ (see Fig. 1). Owing to a half-century-long drive to fulfil the country’s formal housing needs, an unrelenting focus on social housing has brought with it a host of challenges, and Mexico must now adapt to a more sustainable model or risk facing struggles further along the line.

Under the leadership of its CEO, Alejandro Murat Hinojosa, Infonavit has transformed Mexico’s housing market and set the population on a pathway to sustainable prosperity. World Finance spoke to Murat Hinojosa about the many ways in which the housing landscape has changed, and how it is that his and Infonavit’s contributions have created a host of new and exciting opportunities. “Infonavit is changing the course of housing history in Mexico through financial innovation”, says Murat Hinojosa. “We transitioned from a quantity-oriented, numbers-based mortgage model to one focused on improving the quality of life of the workers and their families, not only providing mortgage loans, but also protecting and ensuring efficient returns to their savings.”

Providers of mortgage loans in Mexico, 2014

Some decades ago, large swathes of the population couldn’t afford a house, and the prospect of a home away from hardship convinced millions of city residents to pack their bags and head to the outskirts where the costs were less. With housing agencies like Infonavit doling out subsidised mortgages and healthy relocation packages, the focus on social housing construction enabled the country to make a much-needed transition. “This rapid expansion of housing finance [see Fig. 2], led mainly by Infonavit and facilitated by public policies aiming to expand access to formal housing, enabled the country’s transition from informal to formal housing on a grand scale”, says Murat Hinojosa.

“Although great progress towards diminishing the housing deficit was achieved, the model became unsustainable.” In choosing to focus on social housing outside of the city centre, the population has moved away from the pick of the jobs and services, which has raised congestion, dampened productivity and brought an all-round lesser quality of living. The country’s urban population rivals many even in developed nations, yet the key difference is that largely low-rise single-family homes rather than high-rise buildings dominate the landscape. Irrespective of the efforts made to address the housing deficit, the market of today still bears the scars of abandoned properties and social segregation, according to a recent OECD report prompted by Infonavit, and the sector has failed to provide the basic benefits of agglomeration: lower transportation costs, security, better schools, lower carbon emissions, innovation clusters and proper public services. Changing face
The appointment of President Enrique Peña Nieto in 2012 hammered the final nail in the coffin of Mexico’s long running social housing model. This has shifted the government’s focus to centre less on single family housing and more on ‘verticality’. Since his appointment, the president has partnered with congress to approve no less than 11 key structural reforms, each aimed at boosting productivity, expanding citizen rights and, crucially, consolidating a more efficient democracy. “The federal government has shown a strong commitment with this sector and as such, at the beginning of 2015, President Enrique Peña Nieto has announced fiscal and financial measures supporting housing financing and development with aims to build 500,000 new homes with an expected investment of over $23bn”, says Murat Hinojosa.

True, the issues plaguing the housing market are not easily fixed, though the ruling administration’s well-intended structural reforms should boost both the country’s productivity and competitiveness, and should generate sustainable economic growth in the region of five percent and upwards by 2018.

As was the case for so many developing nations of its ilk, Mexico was in no way isolated from the financial crisis, and the circumstances inflicted pains on the economy and on employment (see Fig. 3). “The effects of United States’ housing crisis took some time to appear in Mexico but they were significantly less. One main difference is that in Mexico there was no price bubble. As a matter of fact, the impact on housing prices was limited”, says Murat Hinojosa.

“Another important difference was the contagion between different sectors. Whereas in the US the crisis began in the real estate market and spread through the financial sectors, in Mexico the opposite effect occurred. Moreover, in Mexico the contraction of housing sales, while important, had differences between regions and segments.” In this important period, Infonavit fought hard to keep pace with lending, to mitigate the decline in housing supply and to secure its affiliates’ access to housing.

Fast-forward to the present and the market is much changed from the crisis-stricken climate of yesteryear. Underpinned by its fair share of macroeconomic stability, Mexico has solid economic fundamentals that should allow the country to cope with any adverse international winds. The federal government has also demonstrated sound financial responsibility in the face of crisis and managed to adjust public expenditures accordingly in an enduring low oil price environment. According to forecasts carried out by Mexico’s central bank, the national economy is on course to expand somewhere in the region of 2.5 to 3.5 percent in 2015 and 2.9 and 3.9 percent in 2016; far greater than the estimates for 2014, which fell in the region of two to 2.5 percent. In a bid to break down the estimate into the sum of its parts, the central bank said that the growth would be driven by a gathering US recovery, a stronger domestic market with improved consumer confidence and labour statistics, and a thriving construction, automotive, aeronautics, services and electronics sectors. However, no other factor will play a greater part than structural reform in the energy, telecom and finance markets, which should shepherd the economy on to greater heights.

In February 2013, Peña Nieto announced a national housing policy and signalled the country’s departure from the social housing model of old, setting out a new course to provide suitable and satisfactory housing in a more sustainable manner. As a fundamental part of the urban development puzzle, the ambition is not only to offer more sustainable housing opportunities, but an all round better quality of life.

Broken down into its simplest parts, the four main points set out in the national housing policy are to enhance coordination of urban planning and housing institutions, move towards a sound and sustainable urban development model, reduce the housing deficit in a responsible manner and procure more appropriate and decorous housing solutions. However, public housing agencies still have a major part to play in the process, not least Infonavit, whose influence in the housing sector means that it will remain a relevant and highly influential party throughout the plan’s implementation. In close coordination with both the Ministry of Finance and Public Credit, and the Ministry of Agrarian, Territorial and Urban Development, Infonavit will continue to work under a sound institutional framework and work closely alongside other national housing agencies in seeing this vision through to fruition.

A reinvigorated market
“Looking at the housing situation in Mexico at the moment, there are a number of points worth touching on”, says Murat Hinojosa. “Due to Mexico’s macroeconomic stability, both commercial banks and governmental institutions are increasing credit lending for the housing sector. On the one hand, commercial banks are lending more money for the high-end market. On the other, governmental institutions are fostering credit for developers and both subsidies and more credit for low-income households.”

The government is also expanding its solutions to build better and more sustainable housing closer to city centres, where jobs are more readily available and transportation costs lower. Its leadership is promoting better coordination from all the relevant stakeholders, which will ultimately bring people to consider formal jobs, improve the sector’s productivity and overall quality of life for the average citizen.

Meanwhile, the vertical housing segment has been gathering momentum in recent years, and in only the past five years its share in the Unique Register of Housing has increased from eight percent to 27 percent. Infonavit’s efforts have also brought positive results in terms of reducing urban sprawl, and between December 2012 and December 2014, the number of housing developments located within the recently defined urban contention perimeters increased from 35 percent to 67 percent. According to data published in 2015 by the National Institute of Statistics and Geography (INEGI), the housing sector contributed 5.9 percent to GDP and three million jobs (7.3 percent of the total) to Mexico in 2012. Additionally, it added more value to the GDP than either agriculture (3.3 percent) or education (4.1 percent) and can be likened more so to transport, shipping and storage (6.3 percent).

Infonavit’s transformation
Otherwise known as the Institute of the National Housing Fund for Workers, Infonavit was originally founded in 1972 as an autonomous organisation, and its institutional governance consists of the equal representation of workers, employers and government. The institute’s dual mandate is to ensure access to decent and decorous housing for Mexican workers and also to provide the secure and responsible management of the National Housing Fund for Workers.

As part of the first mandate, Infonavit managed to generate over three quarters of all mortgages in 2014 (see Fig. 4) and has facilitated more than eight million loans since its foundation. On this same point, the organisation has approximately 4.4 million outstanding loans, and more than 1.2 million mortgages and home improvement credits were granted in the period spanning January 2013 and December 2014. On Infonavit’s second mandate, the housing resources registered by the Retirement Fund Administrators (AFORES) and managed by the institute; represent 21 percent of the total resources.