Could tax breaks be on the agenda for big oil companies?

Oil majors have recently been campaigning for greater tax concessions. Though some say now may be the time to change tack 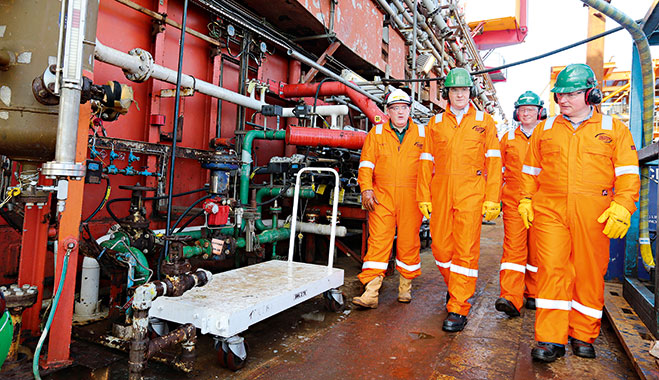 Chancellor of the Exchequer George Osborne visits the Montrose Platform in the North Sea. The UK government cut tax for the oil sector in March
Energy | Markets
Author: Matt Timms

Reaching lows not seen since the 1970s, North Sea oil production has shown no signs of picking up since the late 90s, with some analysts going so far as to suggest that the field is on a knife edge of terminal decline. Blighted by the twin spectre of job cuts and early decommissioning works, those on the sour side of the Brent price slump have been calling on governments to expand their tax breaks and, in doing so, arrest the slide.

“The plummeting oil price has eaten into the margins of large oil and gas companies, and all around the world they are demanding a reduction in overall tax burden, especially on new projects”, says Ivetta Gerasimchuk, Senior Researcher for the International Institute for Sustainable Development. Generous tax cuts would hand struggling firms the impetus they so desperately need, or so say those affected. And for much the same reasons that minimal relief was deemed fit for an industry on the receiving end of rising prices, the opposite should stand for the other side of the coin.

Over the course of the last century, the US Government alone has exempted the fossil fuels business from over $470bn in tax

The announcement in March, therefore, that North Sea oil producers would benefit from additional tax cuts worth £1.3m ($2.02m) was greeted positively by an industry in need of a pick-me-up. With the costs rising and prospects worsening, the move has been received warmly by an industry for which a price shock has squeezed margins.

“Today’s announcement lays the foundations for the regeneration of the UK North Sea. The industry itself must now build on this by delivering the cost and efficiency improvements required to secure its competitiveness”, Malcolm Webb, Oil and Gas UK’s CEO, said of the news. “Along with substantial industry efforts to address its high-cost base and the regulatory changes now in train to provide more robust stewardship, the foresight shown by the Chancellor in introducing these measures, will, we believe pay real long-term dividends for the UK economy.”

Introduced on the basis that tax breaks have a major part to play in keeping the fossil fuels business afloat; by adding to the hundreds of billions shelled out already, the Chancellor has appeased producers though also rattled those who say the oil sector relies too heavily on government hand-outs. “It’s all so tiresome and predictable”, according to Nicholas Shaxton of the Tax Justice Network, and many critics of the same voice have taken pains recently to highlight the ways in which government tax subsidies are founded on a false premise.

Splashing the cash
Over the course of the last century, the US Government alone has exempted the fossil fuels business from over $470bn in tax, and the concessions granted to North Sea operators recently serve to underline the enduring influence of big oil in government policy. Introduced on the basis that a lesser tax burden will keep major names sweet and state contributions regular, the case of the North Sea serves to illustrate that tax relief does not necessarily dictate whether affected parties will stay the course, or indeed whether they’ll stay at all.

Going back to the beginning of the year, Royal Dutch Shell became the first major firm to toy with the idea of early decommissioning works when it started the consultation process in February. Likewise, Fairfield Energy announced in May that it was to begin decommissioning works of its own, “…taking into account the asset’s lifecycle, the depressed oil price and challenging operational conditions in the North Sea”, according to the firm’s CEO David Peattie.

The reasons for further tax cuts are that greater relief will offset, at least in part, a depressed oil price and difficult operational environment, though not all parties are convinced of the policy’s effectiveness. Feeding into a longstanding tradition whereby subsidies have sweetened the deal for struggling firms, the latest North Sea oil tax breaks have handed resident firms reason to continue with expensive projects, though at what cost is uncertain.

Making an appearance first in 1916 as a means of fuelling America’s budding romance with the automobile, much the same subsidies as those handed to the North Sea industry averaged at around $1.9bn (real terms) every year for the next 15 and set an expensive precedent for the decades to come. Since then the industry has changed immeasurably, though similarly generous tax breaks remain very much a constant for an industry struggling to reach the heights of old.

The big five, in BP, Chevron, Conoco-Phillips, ExxonMobil and Shell, are each in and among the most profitable firms on the planet (see Fig. 1), though continue to enjoy billions of dollars in tax breaks each year. One report published by Taxpayers for Common Sense (TCS) shows that in the period from 2009 through 2013, America’s 20 largest oil and gas companies paid a federal effective tax rate of only 24 percent. This is despite claims that the industry pays more than its fair share of the statutory rate of 35 percent, though only when factoring in both foreign and deferred taxes. According to the TCS study: “The American Petroleum Institute cites an industry-wide effective tax rate of 44.3 percent. In reality, the amount oil and gas companies pay in federal income tax is considerably less than the statutory rate of 35 percent, thanks to the convoluted system of tax provisions allowing them to avoid and defer federal income taxes.”

Criticisms of big oil’s special treatment have increased, though the fear holds that major names will simply up sticks and leave without the same concessions. The fact of the matter is still that the industry is one of the biggest contributors to not just US tax revenues, but to state coffers across the globe, and for as long as this is the case action on the point will be muted. Handicapped no more
Many governments are loath to reconsider tax breaks, for fear of an industry backlash, though claims to this effect are increasingly falling on deaf ears. Saudi Arabia, Angola and a host of other such high-tax jurisdictions, are proof enough that excessive rates do not necessarily deter companies from drilling. Yet this point appears to have escaped those in mature economies, who are as yet unwilling to do the same, despite real and growing pressure to reconsider the century-old policy stance.

Nicholas Shaxson of the Tax Justice Network writes that tax cuts for big oil are a “truly silly idea”, namely because “this is about national policy. A tax is not a cost to a nation. It is a transfer within it. Let’s say there is a tax cut worth $5bn. That is a transfer from ordinary UK taxpayers (who will then have to suffer higher personal taxes, or higher deficits, or reduced public services) towards the mostly wealthy shareholders and executives of large oil firms. A large proportion of those shareholders are foreigners. So it’s a net transfer of wealth upwards, and out of the country.” Shaxson argues also that oil majors rarely relocate in search of a more accommodating tax environment, and emphasises that firms need only pay tax on profits, which in itself guarantees they are in good enough nick to take the hit.

More than any of these points, Shaxson notes that the prevailing low price environment presents an unparalleled opportunity for governments to funnel any proceeds towards renewables in place of fossil fuels. Governments from around the world offloaded $550bn on subsidising the production and consumption of fossil fuels last year, according to figures cited by The Economist, and the recent downturn serves as an opportunity to roll back any added incentive to invest in unviable finds.

Changing circumstances
“In our extensive work on energy subsidies, every time the Global Subsidies Initiative has looked at tax breaks and other subsidies to the oil and gas industry, we have found that they are by far not the best way to meet the stated policy objectives”, says Gerasimchuk. “Why create jobs, local contracts and rely on taxes from such a volatile industry? Why go through boom and bust all the time? Renewable energy can meet the same objectives more steadily and help ensure energy security, too. All that without the devastating externalities of oil spills and climate change.”

Having fallen foul of falling oil prices and the looming prospect of stranded assets recently, generous tax breaks for big oil do little to reflect the changed circumstances facing the industry. Higher taxes could prove beneficial both for recipient governments and oil majors, given that the contribution to state coffers would be greater and the inclination to invest in risky assets less. True, oil companies must improve efficiencies where they can in a climate where profits will understandably be less, though the burden should fall on them and not on governments to find the funds.