Although it is a country full of economic promise, Mozambique has a lot of development challenges to overcome if it is to fulfil its true potential 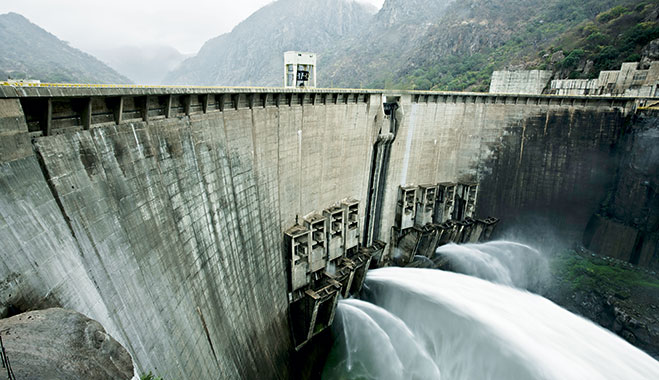 The Cahora Bassa Dam in Mozambique. The country holds an abundance of natural resources, among them being hydropower production - which has become a key investment area
Energy | Markets
Interview with: Alcinda Isabel Gimo Cumba, FL&A

Mozambique became independent from Portugal in 1975. At that time, the economy fell into decline and it became one of the poorest countries in the world. The governance model and the civil war that took place in 1977 only worsened the situation. From 1985 to 1992 and, due to the generalised economic crisis, the poverty increased to higher levels and the Mozambican Government initiated a political change for a liberalisation of the economy, on which the socialist government was abandoned.

In 1987, the government carried out several macroeconomic reforms designed to stabilise the economy. These measures, along with external aid and the political stability brought about by the country’s first elections that took place in 1994 helped improve economic growth. The rising increase in poverty finally began to show signs of a slowdown.

Since then Mozambique has seen its annual growth rate improve, with its GDP percentage change one of the highest in Africa (see Fig. 1). As a consequence, the country’s capacity to attract large investment projects in natural resources is expected to supply a high growth in coming years. World Finance sat down with Alcinda Isabel Gimo Cumba, from the law firm Fernanda Lopes and Associados (FL&A), to look at what the future holds for Mozambique.

What investment opportunities does the country offer?
Mozambique contains an abundance of natural resources. Among them, hydropower production (which is predominantly driven by the Cahora Bassa dam), gas, coal, minerals, wood and extensive areas of agricultural land. In fact, agricultural production is the base of the country’s economy, although, the most dynamic sectors in recent years have been construction, tourism and electrical energy production. Some undertakings, such as the construction of an aluminium factory, represent significant signs that the country is doing a good job at diversifying and developing its economy.

Mozambique holds three important seaports through which domestic production can be exported to neighbouring countries. The Nacala Port acts as the perfect gateway to Malawi, with the Beira Port helping to secure inroads into Botswana, Zimbabwe, Zambia and Zaire. Finally, Maputo Port, after receiving significant upgrades in 1989 in order to better serve South Africa, became the second biggest port in the African continent.

The country also has great potential to increase its tourism industry, with investment likely to attract tourists keen to take a dive in Mozambique’s 2,000km of shoreline or get up close and personal with the local wildlife in one of the country’s many national parks located in its interior.

How has the legal market in Mozambique developed in recent years?
The evolution of the judicial organisation since gaining independence in 1975 to the present day, accompanies, in general terms, the evolution of the political system and the legal-constitutional order. In 1975, the exercise of legal profession and consultancy services, paralegal, judicial or extrajudicial prosecution by private individuals was forbidden, and a public entity, which never became operational, was created to carry out the duties regarding to that matter. However, in 1990, the legal profession was unshackled and its private exercise no longer prohibited, with Mozambique’s Bar Association (OAM) established in 1994.

In Mozambique, the figure of the lawyer is indispensable to the administration of justice. That is why, in our context, the legal profession is considered one of the pillars of good administration of justice, along with judiciary and public prosecutors. Presently, besides the exercise of the private legal profession, the state has created the Institute of Legal Assistance and Sponsorship (IPAJ), which grants free legal assistance and aid to those citizens that cannot afford representation. Nevertheless, the reality has no correspondence whatsoever to what is provided by law, inasmuch as the institute does not comply with its duties.

Unfortunately, it is possible to conclude that the constitutional objective to guarantee the access to justice and law and, therefore, the exercise of that right in fullness is far from being achieved.

The guarantee of access to justice is still a big challenge for the state, and its effectiveness depends on the extension of the judiciary network throughout the country; the adoption of prompt dispute resolution mechanisms; the approval of legislation that facilitates the celerity and simplification of proceedings; the acknowledgement of the existent legislation by citizens and institutions; and the existence of a wide service of legal assistance and sponsorship.

What legal framework is in place for hiring foreign workers?
When investors think about Mozambique, their attention should be focused on the restrictions of local law to the contracting of non-Mozambican citizens.

Enforced Labour Law, regulates the general principles and establishes the legal rules applicable to individual and collective relationships of subordinate work, as a hired employee, against remuneration. The referred law also provides the possibility of hiring foreign citizens to work for Mozambican employers or employers established in Mozambique.

Specific regulation sets out the general rules of the contracting of foreigner (non-national) individuals, be it to be an employee or a director of a company established in Mozambique. Some sectors of activity, such as oil, mining and the civil service are not subject to said decree, but are rather ruled by a different and specific legislation. The hiring of a non-national and foreign employees, by either a national or a foreign employer, is subject to an authorisation of the Minister of Labour.

Mozambique has two main modalities to contract foreigners, be it subordinated workers or directors. The first mode is contracting under the percentage scheme, which is made in accordance with the size of the employer company and the size being measured by the total number of workers. Application for a work permit must be submitted by the 15th day after admission, together with documented evidence of payment of administration fee and several other documents.

Small companies, which are defined as having up to 10 workers in total, are permitted, under the percentage for contracting of foreigners to have one foreign worker (10 percent of total manpower). How has FL&A grown since it was founded?
FL&A was incorporated in 1995 with two partners. The number of partners in the firm has doubled since then. Currently, 12 lawyers compose the work team and the basic languages of the firm are Portuguese and English. The firm has close ties with several law offices across the world. The firm provides integrated legal services to its clients in order to meet their needs. Due to its quality and innovation, FL&A currently ranks among the older and larger law firms in Mozambique, and is one of the most recognised local law firms.

Which areas of practice does the firm cover?
Lots. The firm provides legal services on the corporate field, assisting in the incorporation of companies and the opening of new branches, as well as corporate mergers and acquistions, insolvency and restructuring. Also on the commercial field, on several types of contracts – sale and purchase, lease, building, distribution, franchising, etc. We conduct due diligence and issue the related reports. We have extensive experience and a solid knowledge in commercial and corporate law matters, the lawyers of the corporate area of practice are well versed in the needs and expectations of both domestic and international companies.

Real estate and family law is another sector where we can provide assistance. Everything from acquisition of property, land law, hotel and leisure, as well as, on family relationships, such as domestic violence, separation, divorce, division of property, child custody, visitation, and support. The firm provides legal services on intellectual and industrial property, advertising, marketing and consumer rights, distribution and franchising. We pride ourselves on giving the best legal advice on company, commercial and civil litigation.

How is Mozambique likely to change in the future?
Despite being viewed as one of Africa’s most successful stories of post-war reconstruction and economic recovery, Mozambique has many development challenges ahead. The country remains one of the poorest countries in the world, still depending substantially on external aid, and still below the poverty line.

Notwithstanding, the economic growth has been propelled by important foreign investments in the energy and natural resources sectors.