There’s no escaping product placement for the ‘skip’ generation

How do you advertise to consumers when they have a skip button? Simple, you just seamlessly superimpose products into the background 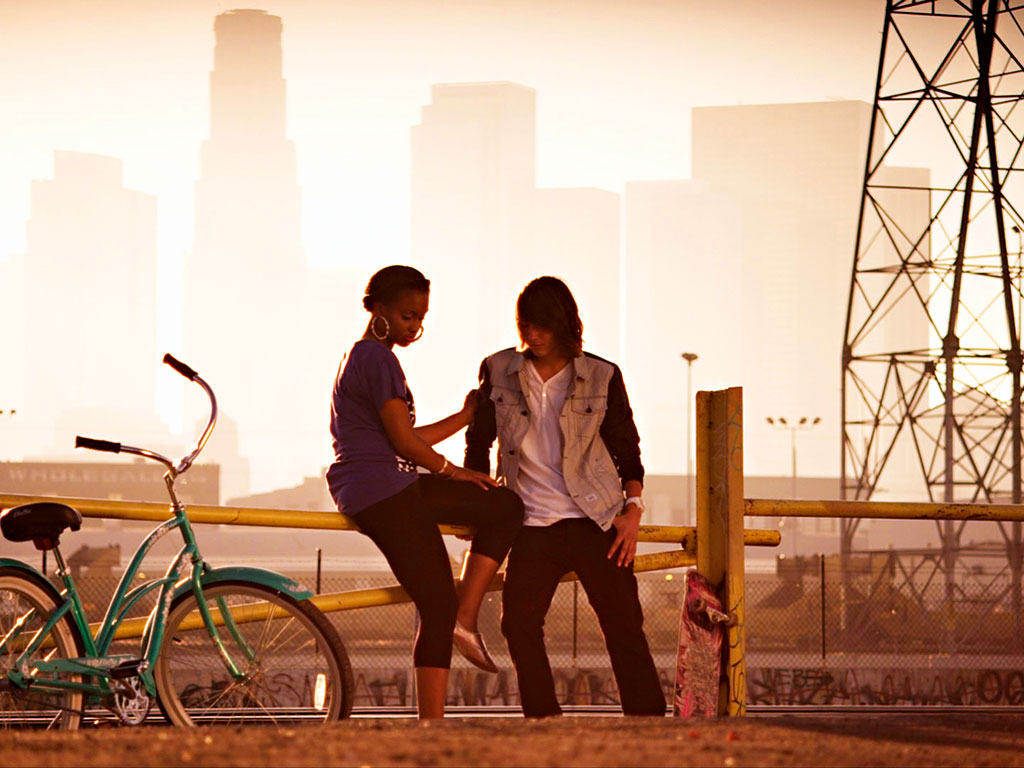 A clip from Rocketeer by Far East Movement featuring Ryan Tedder. Mirriad placed an ad for Grand Marnier in the scene, which can be seen below
Markets | Technology
Author: Aaran Fronda

Product placement is big business. Companies have spent a staggering amount of money in an attempt to part us with our hard-earned cash and purchase their latest product offering, with global product placement spending growing an estimated 11.7 percent in 2012 to $8.25bn according to research carried out by PQ Media. The increase, claims the media research company, is due to strong expansion in BRIC countries, as well as accelerated deployment of TV integrations in Europe and a resurgent US market.

It may come as a bit of a surprise to some that businesses are still ploughing so much money into having TV and movies show of their next big thing – a technique that has been around for more than 100 years – especially with the rise in prominence of smartphones and tablets, it would seem more logical to switch focus and spend more of their budget on digital advertising and marketing online.

Still relevant
“The simple answer is eyeballs versus technology”, says Patrick Quinn, President of PQ Media. “TV remains the most consumed medium worldwide, as witnessed recently by the large global audience for the Super Bowl in the US.” The Super Bowl, he concedes, is an anomaly, as many of the people choose to stay tuned in, rather than skipping or changing channels in order to enjoy the extra special lengths that advertisers go to on this particular day. For the other 364 days of the year people are not so generous with their time. More often than not viewers are more than happy to skip adverts altogether by recording the show first on their DVR or just watching it via a streaming service like Netflix, which offers consumers all the shows they want, ad-free. Meaning it is harder for advertisers to get consumers eyeballs fixed on anything long enough to sell them something.

One place where consumers do not have the luxury of fast-forward is the cinema and where a lot of that $8.25bn is being funnelled. “A major reason product placement spending grew at a double-digit rate in 2012 is the rising level of sophistication being employed to integrate brands into TV programmes and movies worldwide”, says Quinn. “This is especially true in the emerging BRIC countries.” Though product placement in these countries, he says, has been done a little haphazardly, lacking the sophistication of Hollywood. But BRIC countries are starting to step their game up, with a number of professional agencies being formed in order to polish up the product placement and integrate brands into TV and movies with a the subtlety of Hollywood. Though, perhaps that is the wrong word to use. Not all of Hollywood’s attempts at incorporating household names into the silver screen necessarily work, with some efforts even upsetting moviegoers. For the record, Bond, James Bond does not prefer the ice cool refreshment of a Heineken. He likes his Martini shaken, not stirred and definitely not with a head on it.

Mobile marketing
But the fastest-growing platforms for product placement are no longer found at the movie theatre. They are based online and developed specifically for our mobile devices, which have now become our chosen medium to view content.

YouTube alone gets a billion unique users visiting the site every month, making it a relative goldmine for advertisers. Though they face a pretty big challenge. How can they get their message across to consumers about what to buy when most of us are frantically bashing away at the ‘Skip Ad’ button as it counts down from five, four, three, two, one. Frankly, five seconds is just not enough time to sell something, especially when the audiences eyeballs are more focused on a small box to the bottom right-hand corner of the screen waiting for the opportunity to send an advertisers carefully crafted sales pitch on its merry way.

The Skip Ad button is an advertiser’s worst nightmare. But what if, rather than the commercial coming at the beginning or at a designated ad break, it was embedded into the content itself. Though we are not talking about the traditional product placement, like when Will Smith unashamedly unboxes a fresh set of Chuck Taylor’s during the opening scenes of iRobot or when Mike Myers manages to simultaneously mock and monetise product placement in the movie Wayne’s World. The technology that is now being used by advertisers is far more sophisticated than that. In fact, the software is so good the product does not even need to be in the original shot. Though a brand can be superimposed so flawlessly that it makes it appear that it was.

One of the most impressive uses of this technology, which seamlessly integrates brands into digitally consumed content, was when it was used in the British version of Deal or No Deal. Those familiar with the format of the show will know that it involves a contestant, and a host, in the form of Noel Edmonds, both doing their best to make what is essentially a game of chance look like a tense episode about someone who is able to channel the ancients from on high in order to help them “get the right feeling” about a random box that could contain £250,000 or one pence. Throughout this whole ordeal, the contestant clings to their coffee mug, which they sip intermittently throughout the course of the show like it contains the source of their predictive powers. On the mug is a red ‘?’ which is part of the shows branding, but in a re-run of one particular episode it was nowhere to be seen. In its place was the brand of a popular brand of tea, PG tips. But how did they do it?

Product replacement
The answer is a clever piece of software developed by a company called Mirriad. Launched in 2008, the company uses its patented computer vision technology in order to perfectly integrate brand images and even products into our favourite TV shows, movies, music videos and YouTube clips. Seeing the before and after video that shows the software in action is more than impressive. It’s actually a little frightening. The ease in which they import brands into the final cut of content is seamless. And that is the real beauty of the technology. It can be used to add in advertising on anything you like. It doesn’t matter if the original movie is from the 1950s. If an advertiser paid them, Mirriad could give every one of Sidney Lumet’s 12 Angry Men an iPad resting on the table where they deliberate whether or not to send a young man to his death. They can even replace products, such as phones with other devices with perfect precision.

The fact that Mirriad can do this and in a way that looks authentic opens up a world of possibilities for advertisers at a time when it looked like consumers were coming close to living in an ad-free world. “There’s a growing realisation that we’re being trained to be blind to advertising”, says Mark Popkiewicz, the CEO of Mirriad in an interview with The Guardian. “That is undoubtedly going to drive a very hard equation between the people who are putting the advertising dollars on the table and the people who are distributing the content and trying to make the economics work. Certainly something has to change.” Mirriad has certainly brought the change, but to call it that would be a disservice, what they bring to the table is revolutionary.

Subtle transitions
Traditional product placement is all well and good, but it is a massive chore. You need to have the product or brand in the actor’s hand or placed on the set somewhere in the background and then the director has to try and shoot the scene in a way that makes the advertisers happy, but without making it so obvious that is distracts the audience from the plot, which it inevitably fails at. Probably the worse thing about traditional product placement is that it eats into the script. A horrible example of this can be found in Sylvester Stallone’s dystopian future movie Demolition Man, where the only restaurant to survive the franchise wars was Taco Bell. But with Mirriad’s native advertising technology allowing for brands to be digitally inserted wherever, however, a company wants, there need not be a shameless segway in the script.

Another huge benefit of the technology it that it allows for more moneymaking opportunities for content creators. Take popular US rapper 50 Cent as an example. There is a reason why he is showing off the first edition iPod in the music video for his track PIMP, they paid him, but how useful is that product placement now? Not useful in the slightest. But imagine that Apple decide to employ the services of Mirriad’s revolutionary technology to replace the old model iPod that sat so perfectly in the hands of Mr 50 Cent with their new iPhone 6. Well, then that product placement is all of sudden relevant to a contemporary consumer.

Now let’s look at it from a present day perspective. Say you use the technology to superimpose a billboard for Coca-Cola in the background of a Miley Cyrus music video on YouTube, but the company only wants the digital advertisement space for a short run. No worry, just call up a few other big brands and see if they want to take up the opportunity to have their company name in the background, as Miley comes flying in like a wrecking ball. The technology goes even deeper than that. With this style of product placement, a content creator could tailor advertising to different demographics. That same billboard in the same background of the same music video could be marketed to different types of consumers, based on who clicked the link. A campaign could target younger people by showing an ad for Tinder, or if the user is a middle-aged man why not show a beer brand like Budweiser?

“Our algorithms monitor down to a pixel level the actual exposure on screen, time, size, location and orientation of the brand so that we’re always meeting and exceeding a minimum level of exposure”, says Popkiewicz in an interview with engadget. “Our technology is monitoring that, so that when you buy a campaign from us, you’re going to get a guaranteed level of exposure… for the brands, it takes the uncertainty out of advertising.”

With the entertainment industry having to compete with the likes of Spotify, Netflix and other streaming services, not to mention the onslaught of illegal digital downloads, that all undercut their bottom line, it will welcome this guaranteed revenue raiser with open arms. Mirriad can expect a similar welcome as they pitch their software to advertisers around the world, who are going to be salivating at the range of avenues this technology opens up to them, as well as providing a means of defeating their Skip Ad nemesis.

Just when we thought we were free from the advertisers’ clutches it looks like they have just found their secret weapon. Get ready fellow consumers, we are in for one hell of an onslaught of adverts.