Although Modi’s ‘Make in India’ campaign has so far seen little in the way of reform, the timing of the message is key for a country looking to capitalise on China’s manufacturing losses 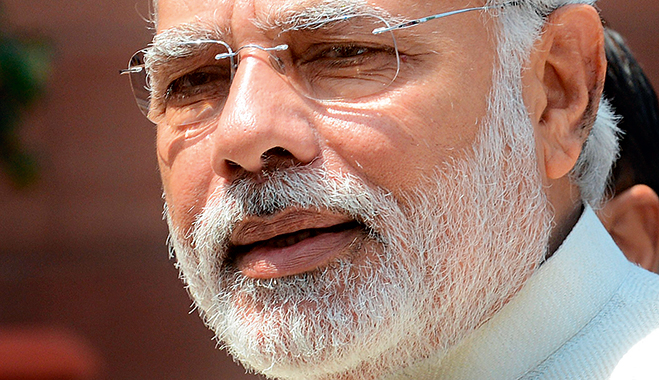 Analysts have blamed India's slow rate of industrialisation for its poor economic growth. The question is whether Narendra Modi - the country's prime minister - can do anything about it
Markets
Author: Matt Timms

“A major new national programme designed to facilitate investment, foster innovation, enhance skill development, protect intellectual property, and build best-in-class manufacturing infrastructure. There’s never been a better time to make in India.” This is the message plastered on the dedicated makeinindia.com homepage and the one that best sums up Prime Minister Narendra Modi’s ambition to turn the country into a manufacturing powerhouse.

Here is an economic and marketing campaign aiming to up the sector’s share of national GDP from 15 percent to 25 percent – comparable with that of similarly sized emerging economies – though still a ways off China’s 32 percent. With this ambition, policymakers have laid down a bold marker that says the country is not merely an emerging marketplace, but a hotbed for production talent. “Government is committed to development. This is not a political agenda, but an article of faith”, said Modi, before a crowd of key industry names in Delhi. “We do not want any industrialist being forced to leave India. I can say that we have been able to bring about a change in last few months.”

A change in perception
Not long ago, the country’s headline growth clocked in at over eight percent, and talk of India soon rivalling the rate of development in China was widespread. However, in the years since, difficult circumstances have taken lumps out of the rupee’s value, and the currency in 2013 lost over 20 percent of its value as growth sunk to its lowest rate in a decade. Ongoing political ineptitude didn’t do much to calm investors, and when India’s current account deficit hit an all-time high, those with a share in the market pulled investments numbering in the billions.

Experts have long pointed to India’s snail-pace industrialisation as the single biggest reason why the country has failed to keep pace with others like it. Tellingly, manufacturing as a percentage of GDP has changed very little – if at all – since 1960, and without a head lunge into industrialisation, the country will struggle to make a name for itself as an accommodating business climate.

Suggestions that India is about to enter a shining new era of manufacturing dominance, therefore, are difficult to stomach. Yet Modi has moved quickly to position himself as an economic saviour, despite – in his own words – not being much of an economist. The IMF’s annual report on the state of the Indian economy shows that policy actions have reduced the country’s vulnerabilities, and that it’s now better positioned to handle financial shocks than it was previously.

“Several important policy decisions have been made that should help revive investment activities”, said Paul Cashin, IMF Mission Chief for India. “We are confident that India can easily go back to an eight percent growth trajectory if further structural reforms, particularly in the fields of energy, agriculture, the labour market, are implemented quickly.” Also, McKinsey and Company have forecasted that the manufacturing sector will tip $1trn, occupy 25 to 30 percent of GDP and create 90 million jobs by 2025, showing that India may not be the down-and-out economy so many believe it to be.

Even still, the vast majority of analysts were taken aback in August, when the Ministry of Statistics unleashed the country’s most impressive growth numbers in two-and-a-half years – at a rate of 5.7 percent in the three-month lead-up to June. And from what has been said in the months since, India’s economy shows no sign of slowing in the years ahead.

The Modi effect
With the appointment of Modi to office, investor sentiment towards India has improved markedly, with many in agreement that the leader of the Bharatiya Janata Party is capable enough to kick start the faltering economy and guarantee a swift return for investors. “The people of India have given a clear mandate”, said President Pranab Mukherjee after the election results were announced last year. “They want to see a vibrant, dynamic and prosperous India. They want to see a resurgent India, regaining the admiration and respect of the international community.”

With only a few months under his belt, arguably Modi’s greatest achievement so far is the influence his time in office has had on business confidence. Renowned for his distinctly pro-business streak, the former chief minister of Gujarat represents a welcome change from Manmohan Singh, who was slow to instruct change towards the latter period of his tenure in office. Such is his clout in the international community that business confidence in 2014’s third quarter sat at a 15-quarter high, as shown by the CII Business Confidence Index. United in the opinion that Modi’s new government will set in motion an upward growth trajectory and improve a lacklustre investment market, it appears that leading business names have been taken in by the PM’s Make in India campaign.

Nonetheless, critics of Modi’s manufacturing push insist that it lacks teeth, with some going so far as to assert it’s little more than a marketing-friendly strapline. As it stands, India’s business climate is ridden with uncertainty and red tape, factors that have succeeded only in driving business owners away in search of more accommodating alternatives. As of 2014, the country sat at a dismal 134 in the World Bank’s Doing Business ranking of 189 countries, which, for an economy of India’s size and strength, does not bode well for its future prospects.

In answer to the country’s low standing, the PM has promised to loosen the obstacles standing in the way of setting up shop, and by replacing the red tape with a red carpet – as Modi so eloquently put it – he hopes more companies will see India as fertile ground. It was in October last year that the government sounded the starting gun on the Make in India campaign, beginning with a list of key labour market changes to boost both manufacturing and employment. And though the decision marked a step in the right direction, many of the reforms are long overdue, given that a number of the country’s laws have been unchanged since the nation won independence over 60 years ago.

Still, the reforms – which include streamlining labour laws and factory checks – have been welcomed with open arms by the national press, though the criticism rings loud and clear that the government has been far too slow to enact the necessary changes. The ever-so-slight steps taken since the PM’s Make in India announcement are indicative of a much wider trend for the Indian economy, in that any progress made from now on will likely be subjected to the too ‘little, too late’ tag. Of the 1.2 billion strong population, 65 percent are under 35, and, by the turn of the decade, the average Indian will be the ripe old age of 29, which makes for perhaps the healthiest available workforce on the planet.

However, without first taking major steps to overturn a market plagued by bureaucracy and red tape, the country will fail to make good on a huge opportunity. Whereas India’s untapped workforce is often flaunted as a major selling point, the asset could soon become one of the country’s biggest problems should the government allow the skills gaps to widen any more than it has done.

Counter productive
To compound the country’s woes, many multinationals have already set up shop in China, and in doing so, have reaped the rewards of low labour costs. Also, names there have already built up a network of suppliers in and around the region, and by choosing to take their business to India, they would only lose out on the supply chain efficiencies they’ve gained already.

However, the situation is perhaps not as forlorn as some fear, and there’s optimism to be taken from the fact that China’s economy is finally slowing and its wages are rising. Countless businesses have made their way to the world’s number two economy in the last decade and a half, buoyed by the easy availability of low-wage workers in a time where bottom lines are being squeezed. However, the China of today is different to the one that has wooed so many businesses in the past.

The World Bank’s Justin Lin asserts that China will shed 85 million manufacturing jobs in the years ahead, and as businesses begin to look elsewhere for greater cost efficiencies, India is arguably the only country with a pool of available talent equal to that of China.

True, Modi’s Make in India pledge has been followed by little in the way of tangible reforms so far, though the renewed focus on manufacturing comes at an opportune time, as the country positions itself to soak up employment opportunities born of China’s changing status. In the meantime, merely stating that manufacturing constitutes an important part of India’s economic strategy is enough to convince outgoing businesses to at least consider the country as an alternative. However, if Modi hopes to turn India into a manufacturing giant, the tentativeness with which he has introduced reforms so far must be switched out for immediate and radical action.