Toshiba agrees to $17.7bn sale of its chip unit 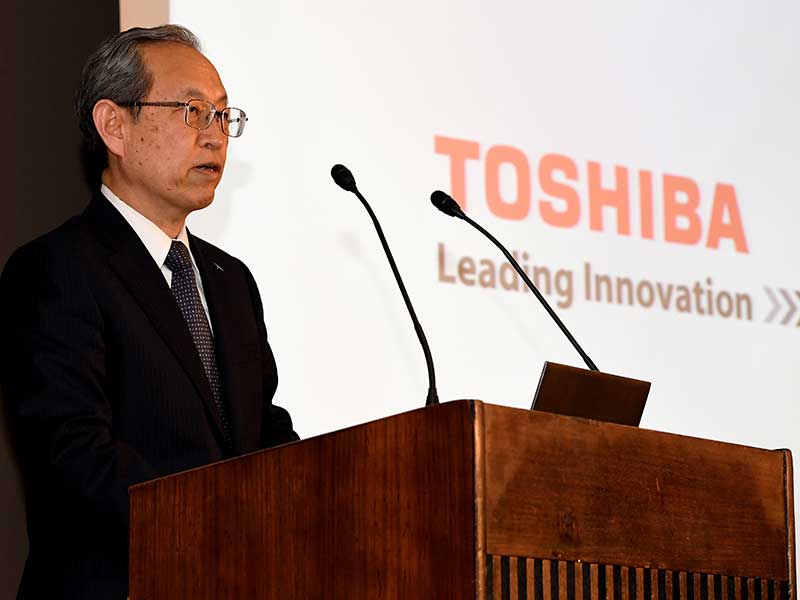 Satoshi Tsunakawa, CEO of Toshiba, speaks at a press conference in June 2017. Following an eight-month bidding war, the company has finally agreed to the sale of its memory chip unit
Markets | Science and Technology
Author: Kim Darrah

September 28 served as a milestone moment in Toshiba’s struggle to regain its financial footing, as it signed a legally binding agreement over the sale of its memory chip unit, Toshiba Memory Corporation (TMC), to a group led by Bain Capital.

The agreement acts to officially approve the sale of all shares of TMC to Pangea, a special purpose acquisition company that is controlled and led by Bain Capital. The final price tag for Toshiba’s prized chip unit is $17.7bn.

The deal comes after a protracted eight-month bidding war, which involved a string of legal disputes and complex network of rival contenders.

The deal between Toshiba and Pangea comes after a protracted eight-month bidding war, which involved a string of legal disputes

In total, US investors will contribute JPY ‎415.5bn ($3.69bn), but will not receive voting rights or common stock. After the transfer, more than half of stock in Pangea will be held by Japan-based companies, something that Toshiba said was set to continue into the future.

Once the shares are transferred, Bain Capital and the management at Toshiba’s chip unit will “lead TMC’s business operations to secure continuous growth”, according to a press release from Toshiba.

While the deal has now been confirmed, it will still be subject to approvals over competition and national security laws. It could also run into difficulties over Toshiba’s joint venture partner Western Digital, which is seeking an injunction to block the deal over a contract dispute.

If all goes to plan, however, the deal is expected to close officially by the end of March next year.