Vazon Energy on the changing landscape of oil and gas

Firms are beginning to discover unexplored oil and gas reserves available in central Asia. As technology develops, oil production is set to increase 20 percent by 2020 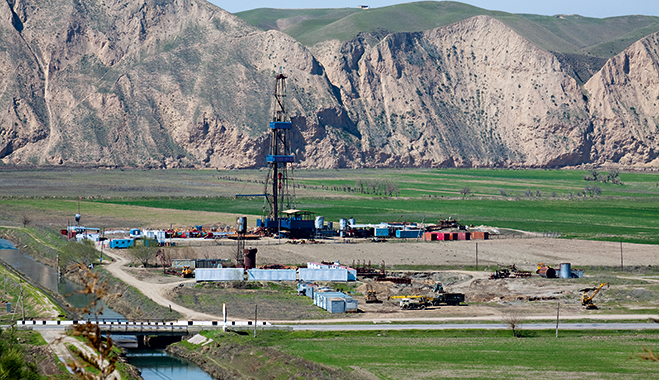 Central Asia is among the relatively untapped global oil areas, which Dr David Robson, Executive Chairman of Vazon Energy, describes as the “fuel tank” for the Asian economy. A geologist and leading businessman, he spoke to World Finance about how oil and gas exploration is changing, where the world’s potential lies and how his industry experience has helped him lead the way as a pioneer in undiscovered regions.

As infrastructure has developed over the years, areas such as Central Asia have become increasingly attractive – particularly with the newly developed links into the Chinese market

I then moved into production geology and geophysics, working on some of the large North Sea fields on which Britoil was the operator or joint venture partner, as well as looking at international projects for Britoil in places such as South America. Following that I moved to Hamilton Brothers Oil & Gas, working in the Petroleum Engineering Department as a development geologist, before acting as a deputy to the manager of petroleum engineering.

My projects focused on the development of new fields such as the large Bruce gas condensate field, and on smaller fields such as Crawford, where we drilled one of the very first off-shore horizontal wells in the North Sea. I also worked on the abandonment of the Argyll Complex, the UKs first offshore field.

In late 1989, I started developing Hamilton’s business in the then emerging markets of Eastern Europe and the former Soviet Union (fSU). I worked on projects across the whole region, from Poland through to Sakhalin, Siberia, the Pechora Sea, the Caspian Sea, Central Asia and down into the Caucasus. This gave me an extremely good knowledge base of the region and the projects available.

After a short spell at Mobil North Sea I started my own venture to build a new oil and gas company in the fSU in partnership with engineering company J P Kenny. Using my knowledge and contacts in the area, we created JKX Oil & Gas, working on projects in the Caspian, Georgia and Ukraine areas. The company was listed on the main market in London in 1995. In 1997 I started creating a new company, CanArgo Energy Corporation, focused initially on Georgia and then Ukraine and Southern Russia.

Tethys Petroleum grew out of that in 2003, focusing on Central Asia. I drew on my experience in the fSU to capitalise on the exciting potential of the Central Asia basins, including those in countries such as Tajikistan. I still regard myself very much as a geologist and a professional involved in finding and developing oil and gas.

Was it a conscious choice to work in Eastern Europe and the CIS, and if so why?
My move into Eastern Europe and the fSU was driven by my interest in developing these untapped basins and using modern technologies to develop oil and gas deposits in what is a vast area with enormous potential. That potential still remains to be fully exploited.

In what key areas of Eastern Europe and the CIS have you worked in?
My early involvement in areas such as Siberia and Mongolia led me to believe it would be better to work on developing oil and gas on the peripheries of the former Soviet Union, particularly in the newly independent republics, which were very keen to see their oil and gas resources exploited. That led me to places such as Ukraine, Georgia and areas in the North Caucasus and Caspian, such as Dagestan.

As infrastructure has developed over the years, areas such as Central Asia have become increasingly attractive – particularly with the newly developed links into the Chinese market.

In what major ways have you seen the oil and gas industry in the region change?
When I first started work in the area, the techniques used to drill and produce oil and gas were extremely rudimentary. Heavy and unsuitable drilling muds were being used, which effectively damaged the reservoir and severely limited production potential. Ineffective reservoir development methodologies were also being used, resulting in low recoveries, while very basic seismic and other exploration technology meant that many deposits weren’t being found.

The industry in the region has changed radically through investment from international oil and gas companies, the development of local technology companies, good management and improved techniques and technologies. There are however, still numerous opportunities for international companies to further improve both production and exploration success in the region.

How have you seen the geographical distribution of opportunities in the oil and gas industry change?
There are many opportunities with existing oil and gas deposits across the region to use modern techniques such as horizontal drilling, fracture stimulation and so on, and to enhance and produce significant volumes of additional oil and gas. There are huge areas which have hardly been explored, and I believe the focus in the future will be on finding deposits in areas such as Central Asia and Eastern Siberia where there are very large, underexplored basins with enormous potential.

New technology enables us to look further into areas which were previously restricted, such as off-shore in the Arctic Ocean and perhaps further into off-shore areas to the east of Siberia.

There are high potential geological environments where very little work has been carried out to date. The increased focus on things such as shale oil development has not yet hit the fSU, but the area has some of the best organic source rocks in the world, and some of the world’s best potential for shale oil production.

On the business side, the first oil and gas joint venture in Ukraine; the first loan from the EBRD to a private sector project in Ukraine; developing the country’s third biggest gas producer; the first Production Sharing Contract in Georgia and the first non-state drilling in Georgia; the first Production Sharing Contract in Tajikistan; and more recently, the first tripartite farm-in by a super-major and a super-NOC to work in partnership on exploration in the Bokhtar area in Tajikistan – which has very high potential.

Professionally, the Medal of Honour for Services to the Georgian Hydrocarbon Industry, presentations at the Paris Club of donor nations in Ukraine and Georgia, being a founder member of the President of Tajikistan’s investment council, and my appointment to the Supervisory Board of OrienBank, Tajikistan’s longest established bank, all stand out.

What are your predictions for the future of the industry in Eastern Europe and the CIS?
I believe with further investment huge amounts of oil and gas could be produced in Eastern Europe and the fSU. There are vast areas of the Russian Federation with enormous potential. Although some are in extreme environments they are likely to be developed, depending on energy prices in the future.

Areas such as Central Asia – where operations are somewhat cheaper – still have enormous potential for significant discoveries – which will fuel both gas and oil demand globally. These basins extend down into Afghanistan – another area where I have sought projects and which has significant untapped potential for the future.

The increased infrastructure and exports of gas and oil from Central Asia into the Chinese market is a very important factor in recent times, and I believe this will increase in the future to supply the energy hungry markets of East Asia. Potential in areas such as the Black Sea have not yet been fully explored. The developments in the Caspian Sea are already poised to yield significant flows of oil and gas into the world markets.

This area is an energy powerhouse for the surrounding regions, and with proper development its potential is enormous. The increasing pace of infrastructure development is likely to ensure an extremely bright future. I look at the area as being key to the development of Asia in general, particularly the Chinese market and, in the future, the Indian sub-continent.

As such, where I work today in Central Asia is effectively the fuel tank for the development of the Asian economy. I believe there is room for further integration of the area with the Asian markets, and for very strong economic development as those areas grow. I am very proud to be involved in the endeavour.