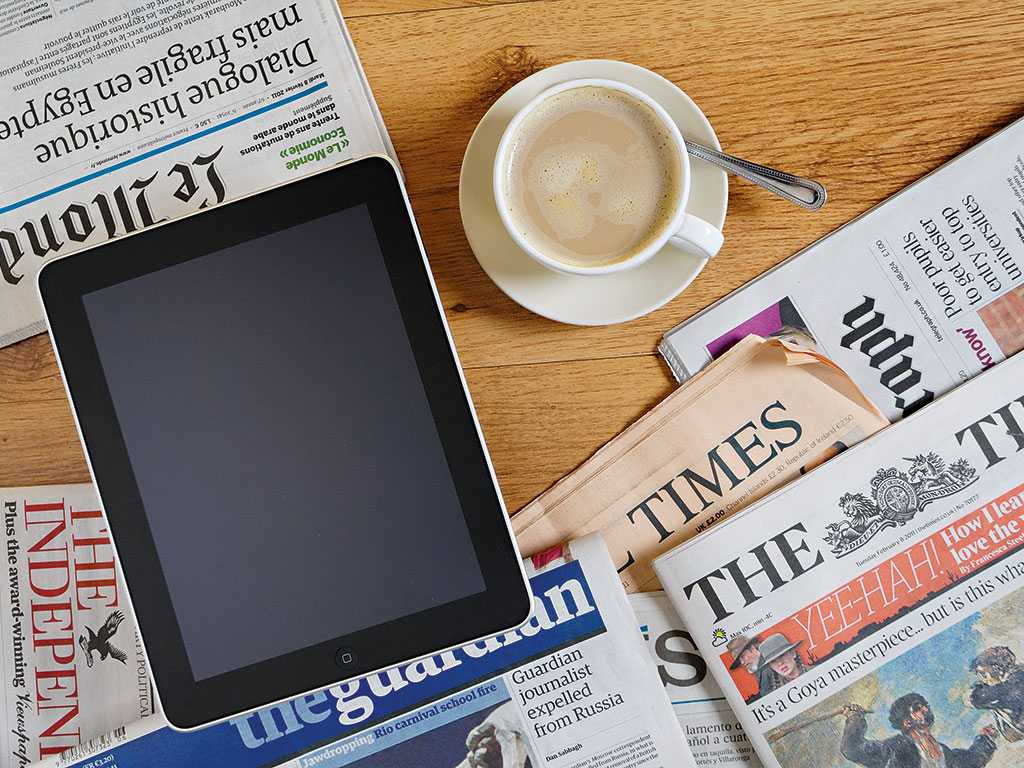 Following the onset of the financial crisis, when numerous media outlets scaled back their budgets, many proclaimed print publishing dead. But all the evidence suggests that it is as alive as ever, just changing
Markets
Author: Elizabeth Matsangou

For centuries, the printing industry flourished as consumers had increasingly more disposable income to spend on goods such as books and magazines. It was no coincidence that marketing became an integral aspect of business models, resulting in the proliferation of posters, leaflets, brochures, billboards and the like. While this was the case for the greater part of the 20th century, a throng of new challenges is permeating the print industry’s latest chapter.

Following the onset of the financial crisis and its subsequent long-term repercussions, advertising budgets were in many cases the first to face a trim. Magazines and newspapers, both large and small, have since contended with drastically reduced profit margins, while book publishers face their own myriad obstacles.

When the digital revolution first began making waves across the globe, the phrase ‘print is dead’ swept through the industry like a death sentence. Fresh content and breaking news became available at the touch of a button and if popular, reached the screens of millions within a matter of minutes. And as if the macroeconomic nuances were not enough to shake the industry (see Fig. 1), the internet has transformed consumer expectations, as well as the market itself. Nowadays, even with no training, anyone can conduct an effective marketing campaign. There are now countless possibilities for businesses to promote themselves at low or even zero cost, meaning that traditional platforms face considerable pressure to evolve, adapt or die.

Top five circulation of us dailies with paid tablet editions

Modern-day challenges
The printing industry plays a supporting role to every sector and market; all businesses, governmental bodies and educational enterprises require printed materials. As such, amid economic decline interlinked industries face proportionally bigger consequences than
their counterparts.

The result is far greater competition between printing firms, which is heightened further through globalised networks that can quickly locate the most cost-effective source.

“Companies are being forced to look at digital channels which can offer low unit cost communications. However, often these are not as effective and so a balance needs to be struck. More and more companies are realising the benefit of adapting multi-channel strategies, using a combination of traditional and digital print and e-delivery”, said Linda Bosch, Managing Director at MBA Group, a printing company that has evolved into a multi-channel communication business.

While the technology has developed, most notably from traditional press to inkjet printing that has enabled faster and cheaper production, the rate of global competition is too fierce to allow persistent price undercutting. Many have buckled, while others have compromised on quality. “It has put pressure on printers to be in tune with the world of IT and data management, and continuously keep abreast of new advancements”, Bosch told World Finance.

“This is not a small challenge for an industry that is multiple decades old. The investment in new technology and the ability to adapt to an ever-changing and challenged market has resulted in fewer traditional printers being available. It is practically unheard of for someone to set up business as a printer in today’s world.”

The primary function of printers has always been, and always will be, communication. Whether a message, story, a campaign, or an idea. Whereas historically this has been done via the printed word – the internet has brought forth new platforms for communication. As such, successful industry players are broadening their product offerings and portfolios considerably; not only do they provide the service of printing brochures, posters and books, they now offer creative solutions, consultancy services, project management and digital development. From website design to data management, traditional printers have placed themselves at the forefront of the communications industry.

They have become the one-stop shop for organisations, thereby allowing a multi-faceted, omni-channel communications approach. “Today, the various digital channels have brought the print industry opportunities, as opposed to threats. Printed communications are being integrated with digital mediums to provide a consistent brand experience centred on individual customers. It is like a partnership – you need both physical print and electronic communications to work together for them to be the most effective”, Bosch told World Finance.

The evolution of print
People are more in tune with marketing and advertising than ever before, and have a deeper understanding of what can be done, of what is already out there and the importance of standing out from the crowd. “Customers are a lot wiser nowadays, they are more aware of marketing techniques and increasingly expect their documents and communications to be unique to them as individuals”, said Jon Barratt, Marketing Manager at MBA Group.

This has made it necessary for printing firms to transition from a customer-driven to a customer-centric approach, meaning that not only must they provide for their clients’ communications needs, they have to know what these are before the customer knows themselves. As communication specialists, these firms have to stay ahead of the game in terms of the on going development of the digital world.

Most organisations are choosing to incorporate digital marketing in their strategies and are taking strides to broaden their online presence as they should – they would be foolish not to. The digital age is not a passing phase; it will continue to infiltrate more aspects of our lives and areas of business (see side bar). That being said, there is still a place for print – it has qualities that online counterparts can never have, by their very nature. “There is the tactility of print – one thing that digital has never really succeeded in replicating is the sensory experience, either replicating or providing an equally good alternative”, said Rob Orchard, Director of The Slow Journalism Company and Editorial Director of Delayed Gratification magazine.

Then there is permanence. Nowadays, content on the internet vanishes as fast as it appears. A swift scroll and its gone. Among the endless barrage of posts – in any format they happen to come in – it is increasingly difficult to see the wood from the trees, namely the valuable, interesting and informative from the time-wasters. Managing to catch consumer attention in a split second and then keeping it fixed is an unenviable task for marketing managers and individuals alike.

“If you want to stay on top of what’s happening, you could very easily spend every working hour of every day because there are live blogs updating from 10 different cities across the world at any one point. There are updates coming through from your favourite news resources straight to your phone, on Twitter, Facebook and RSS feeds. There’s a feeling of unmanageability, a feeling of this white noise of news media coming at you. And I think that print is a fantastic antidote for that because it is self contained, it’s limited and there is something quite comforting and calming about that”, said Orchard.

A book or a magazine has the lure of time. It’s content is unchanging and always accessible (unless physically discarded). It can sit on a shelf or in a study for months or years, tirelessly waiting to be devoured for the first or 100th time. “There is a permanence to print that digital doesn’t readily offer. I was told by a college student that ‘digital means impatient’, which I think refers to the impermanence of digital; once it’s off the screen, it’s out of sight in their minds”, said Gerald Richards, CEO of 826 National, a writing and publishing NGO based in the US. Consumers naturally spend more time reading the printed word than they do with digital content – taking their time to digest and understand, returning to the piece when necessary – simply, it holds their attention and is considered worthy of more time.

Publishers understand this crucial difference all too well and have adapted to it. As such, many publications now provide much more complex and involved offerings – writers have the opportunity to deeply explore a topic, rather than rapidly assimilate information about an event for online, while also catering to the SEO beast.

“Our slogan, which is on the spine of every magazine is, ‘last to breaking news’. It’s this idea of we’re not going to bring you the breaking story from Athens right now, but in three months time we are going to return to it with the benefit of hindsight and we’re going to give you an in depth look of how the situation has evolved over that period, which is going to give you a perspective that nobody else is in a beautiful print product”, added Orchard. And for writers, there is still something exciting about producing for print, for the same reasons as there have always been and even more so now because anyone can post online and publish their work to an audience. Co-habitation possible
“The print industry is going through a continuous transformation. There is no end destination – it is a never ending journey that requires continuous energy to embrace new technology and ensure that we keep in tune with our client’s needs and their customer’s wants”, Bosch explained. There is so much that print can offer, both to those who produce it and those who consume it, and it is still a vital tool in advertising.

In the practical sense, it offers information that is permanent and finite, and does not need electricity to be read. While the aesthetic value of printed materials means that they can decorate a home, an office or even a city. “There’s actually loads of ways that print is superior to digital and I think that the pendulum has really swung back a lot”, said Orchard.

Digital media on the other hand offers something very exciting – something that was never before possible. It gives every individual and organisation, no matter who they are, where they are, or how influential they are, a voice – one that can captivate millions and spread like wildfire across the entire world. It allows information and news to travel faster than ever before, enabling people to share and learn more than they could ever dream of prior to the internet. It’s a tool that can save lives and has changed the world.

The two worlds can live together symbiotically. Consumers enjoy, benefit and learn from both, while organisations can employ each for different reasons. Print and digital mediums can complement one another – technology doesn’t have to be a threat, but an opportunity. Each medium has its own merits and benefits, as well as its flaws; but where one fails, the other has in abundance.