Incentivising CEOs with long-term rewards has become a popular practice with remuneration committees, but researchers believe this habit could be doing more harm than good 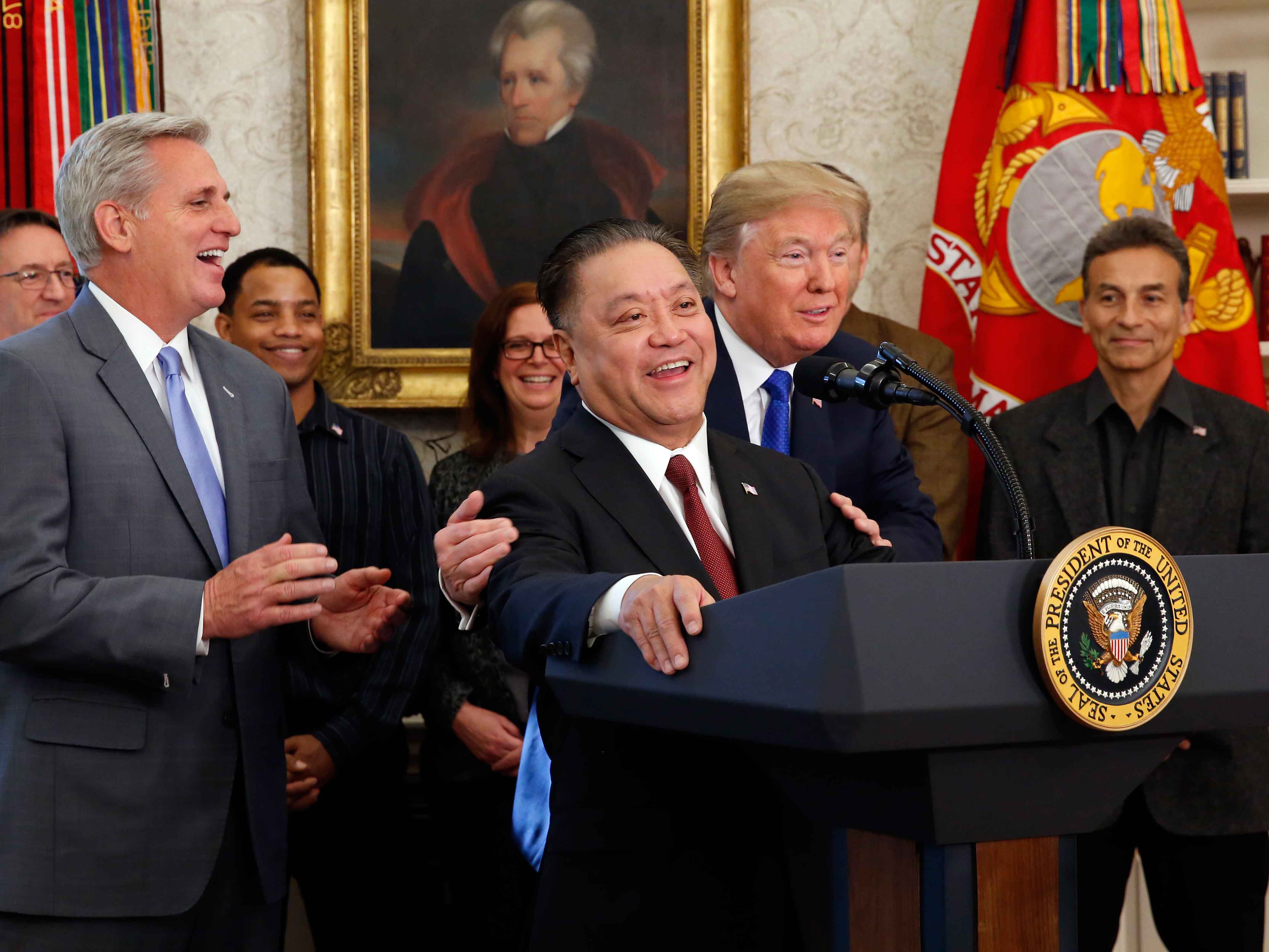 Hock Tan, CEO of Broadcom, is one of the highest-paid executives in the world. Tan received a salary of $103.2m in 2018, according to 24/7 Wall St
Corporate Governance | Featured | Strategy
Author: Courtney Goldsmith

High-paid executives come under frequent criticism for the size of their pay packages. Headlines bemoan the super-rich, and campaign groups censure the wage gap disparities emerging with lower-paid workers.

In 2017, the CEOs of the 350 largest companies in the US were paid an average of $18.9m; a nearly 18 percent upswing on the previous year, according to the Economic Policy Institute (see Fig 1). As executive pay heads higher, remuneration committees must ask whether the growing price tag reflects stronger financial performance.

The tool that was supposed to ensure CEO pay matched with stable financial growth was the long-term incentive plan (LTIP), a metric first thought up in the 1970s. LTIPs are used on the basis that they align the interests of executives and company shareholders by paying CEOs in stock options or shares awarded on performance targets. But although LTIPs have been widely adopted, critics now say they have failed to work as intended.

Long shot
While the biggest CEO pay cheques go to American companies, Xavier Baeten, a professor in reward and sustainability at Vlerick Business School in Belgium, told World Finance that British and German firms boast the highest levels of executive pay in Europe.

A growing proportion of the pay packages of top UK CEOs are represented by LTIPs. CIPD’s 2018 Executive Pay report on pay levels at the UK’s 100 biggest companies found a base salary represented just 16 percent of the total mean remuneration. This was even lower than the previous year, largely due to an increase in LTIPs, which represented 56 percent of total pay. “The inflation in executive pay is partly a consequence of paying people with very long-term instruments,” Alexander Pepper, a professor of management practice at the London School of Economics, told World Finance.

Baeten argued that LTIPs are flawed because they are awarded over too short a period of time. After looking through his database of 850 listed firms in several European countries, Baeten found that just one percent of companies granted stock without performance conditions and with a vesting and holding period of more than three years total.

“A performance share plan with a vesting period of three years, in which vesting is dependent on [total shareholder return] or [earnings per share], will not focus the top executives on the true long term and/or sustainability,” he said. “Above all, I think that the real thing should be to change the design of [LTIPs] in order to make them really long-term orientated.”

In the money
Pepper, on the other hand, believes LTIPs are inherently flawed: “This approach to executive pay that’s fundamentally based on neoclassical economics – the problem is it doesn’t properly take account of behavioural considerations.”

From his research with PwC, published in the company’s Making Executive Pay Work report, Pepper found a number of explanations for why LTIPs do not correlate with better financial performance in practice. For instance, the research showed that senior executives are more wary of uncertainty and risk around pay than previously thought: the vast majority would choose a fixed pay packet over a bonus of a higher value.

Similarly, executives discounted deferred pay at a very high rate, signalling that the longer they would have to wait, the less the money was worth. “If you’re choosing between £100 [$127] today and £100 in three years’ time… you’d want a lot more than £100 in three years’ time to compensate you for the fact that you’re having to wait,” Pepper said. Executives already know all of this themselves. According to PwC’s research, fewer than half believed their LTIP was an effective incentive.

These findings explain one reason why executive pay has increased in recent years. Rising pay packages can create even more problems, Pepper said: pushing pay higher and higher ‘crowds out’ any intrinsic motivations a CEO has for doing their job. “The classic instance of this is in the banking industry, where pay has got to such astronomical levels that people are only motivated by money,” Pepper said. “And to some extent, this is also, we believe, representative of what’s happened in corporations more generally.”

Yet higher pay does not appear to translate to better financial performance: Pepper and Baeten both found that the metric with the strongest correlation with executive pay was the size of a company. For every one percent increase in market value, Baeten found CEO pay rose 0.4 percent. “I have rarely seen statistical analyses with such clear outcomes,” he said.

In fact, the CEOs of companies that reported a better performance over seven years than the wider industry were paid relatively less, with a lower proportion of variable pay, Baeten said. “In other words: firms with a better performance [in] the long term are characterised by modesty,” he told World Finance. Charles Towers-Clark, CEO of Pod Group, an Internet of Things provider, said that beyond the recruitment stage, “financial incentives should be, and generally are, the least important motivator for employees, including executives”. For example, respondents to PwC’s Making Executive Pay Work survey would take a 28 percent pay cut on average to work in their ideal job.

Shifting the balance
Pay is still a significant incentive, however. The best way to get results from CEOs without inflating pay, according to Pepper, would be to shift a larger proportion of remuneration to an executive’s salary and short-term bonus. Alongside a generous salary and a cash bonus, companies should require executives to invest a certain amount of their own money into stocks in order to align their long-term interests with those of shareholders, he said. “My belief is that, actually, in total, you would need to pay people a lot less than you do at the moment if you restructured the way that you remunerate them,” Pepper said.

But challenges still emerge when employing this logic in the real world. The industry has an aversion to big changes when it comes to rewards, Baeten said, partly because companies look to one another as benchmarks. Pepper described a phenomenon he called the ‘remuneration committee’s dilemma’; a riff on the prisoner’s dilemma in game theory. In this situation, remuneration committee chairs who are in competition with one another for the best talent tend to pay over the odds in the hope of attracting a CEO from the top tier and reducing the risk they will get one from the bottom 10 percent.

From the shareholder’s standpoint, there is a collective action problem, Pepper said. Each shareholder only has a small percentage of the total share capital, and this means it is not in their best interest to sort out executive pay problems. “In practice, there’s a kind of reversion to the status quo, as it were,” Pepper said. “It’s difficult to see how the problem of executive pay will be solved if governments don’t intervene in some way.”

Lifting the veil
One local government in Portland, Oregon, has taken high CEO pay into its own hands. The city introduced a tax in 2018 whereby any company whose CEO makes 100 to 250 times more than the median worker must pay a 10 percent tax. CEOs with pay 250 times over will be forced to pay a 25 percent surcharge. The city has estimated the measure will bring in up to $3.5m in its first year.

But despite Portland’s good intentions, there are some fundamental issues with the tax. First, it is relatively easy for companies to manipulate their pay ratios: these can be decreased by simply outsourcing the lowest-paid jobs. At large multinationals, this can include cleaners, caterers and security services.

Secondly, the tax penalises companies with a large amount of lower-paid workers rather than companies that pay their CEOs excessively. “The trouble is, [Portland’s method] is more likely to hit a retailer than it is to hit an investment bank with lots of very highly paid people,” Pepper said.

Although Pepper said more research must be done on possible government interventions, the simplest thing to do would be to increase marginal rates of income tax. He added: “I would argue that increases in the… top rates of marginal income tax are a necessary part of any government attempt to intervene and solve the executive pay problem.”

While Baeten believes disclosing pay ratios is not at all beneficial for companies, Towers-Clark thinks transparency can be a powerful tool on an employee level. “If employees are to make their own decisions about any aspect of their working lives – i.e. starting new projects, choosing suppliers, investing in emerging technologies – then they must have all the relevant financial information available, the most important piece of which is salaries,” Towers-Clark said.

While some questions remain around how to implement an effective pay scheme, it is clear that LTIPs as they currently stand miss the mark. Developing a new approach to reining in inflated levels of pay and enhancing executives’ intrinsic motivations could pay dividends.