By embracing new technologies, AYA Bank has played a critical role in the ongoing transformation of Myanmar’s banking sector 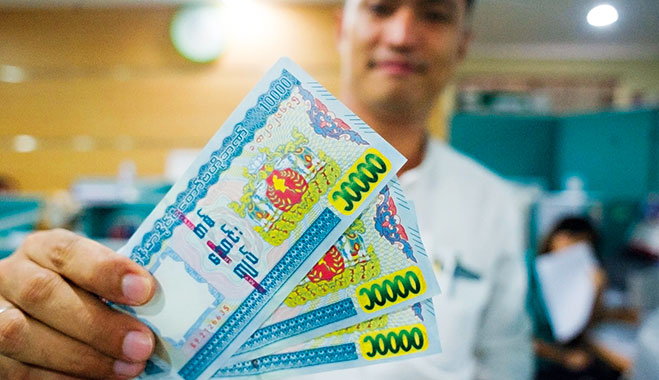 Myanmar’s banking sector reached a key milestone last year when it decided to open its doors to foreign banks for the first time, consequently summoning the attention of the international banking community. In the months since, Myanmar’s performance within the sector has been extraordinary, yet the lion’s share of growth has been spearheaded not by these new international arrivals, but by experienced local names. In a time when emerging markets are struggling to maintain their explosive growth rates of old, Myanmar, guided by a strong banking sector, remains on the upward curve.

Of the banks that have contributed to the industry’s development so far, none has played a more important part than AYA Bank, which has pushed the envelope of what can be achieved time and time again. U Phyo Aung, Managing Director of AYA Bank, spoke to World Finance about the sector’s evolution over recent months, and the ways in which the bank is paving the way for future developments.

How has banking in Myanmar evolved?
The country’s banking sector has evolved substantially over recent years. However, Myanmar is still regarded as one of the world’s most ‘under-banked’ countries: according to a PwC report, bank loans comprise only 19 percent of GDP, with only about 30 percent of adults claiming to have any kind of access to financial services.

of adults in Myanmar are currently banking

Nevertheless, the government is working to increase the bankable population to 40 percent by 2020, by implementing such positive steps as the passing of the Central Bank of Myanmar Law in July 2013. This law resulted in the formation of an autonomous central bank that is responsible for the nation’s monetary policy as a whole.

In October 2014, nine banking licenses were awarded to foreign banks, allowing them to enter the country’s banking sector for the first time. The entry of these international firms has provided local banks with the incentive to improve their services in order to take full advantage of the new opportunities provided by their presence, including access to cheaper capital, improvement in management and technology, and the development of a regulatory framework.

The central bank has also announced a plan to deepen the financial market, with further plans to establish a capital market and to push towards financial inclusion, which in itself will include the introduction of agency banking and micro-financing.

What role does technology have to play in this development?
Myanmar’s banks had been using legacy systems for several years before four new firms, including AYA Bank, were founded in 2010. With the use of advanced technology, AYA Bank has started implementing several new projects, such as setting up the centralised infrastructure architecture and a core banking system. Effective use of this technology means that AYA Bank has become a flagship institution and the fastest growing bank in Myanmar.

This achievement has caused many other banks to be drawn to the industry, and as a result many of these banks have now begun to implement their own technology-driven digital delivery channels, such as ATMs, internet banking and mobile apps. Effective use of this technology has in turn had a positive effect on the growth and development of the sector.

In what ways does AYA Bank use technology to improve its services and products?
AYA Bank has used advanced technology, such as wireless communications and mobile and web technology, to improve its entire range of products and services. The goal of AYA business in terms of customer interactions is to generate loyalty based on technology-driven digital channels. This initially began with the evolution of technology and the banking community’s subsequent adoption of it: new systems and infrastructure have been designed to take care of the accounts that are related to the bank’s functions and to establish better network connectivity for centralised operations. Advanced web technologies have been used to set up the first ever internet banking services in the industry, together with the first 2FA implementation for user and transaction authentication.

What further technological developments does AYA Bank have planned?
The bank has expanded its mobile financial services in order to offer new products to its customers, including those who are currently un-banked. AYA Bank is also developing new products that will contribute to the efficiency of self-service platforms, in addition to converting all systems on virtualisation, hosting private cloud computing and improving security on a variety of networks.

How does internet banking help AYA Bank to compete with rivals that are both domestic and regional?
AYA’s iBanking service helps to speed up transactions and provide greater all-round convenience, as customers are able to access their account from any internet-enabled device. Moreover, since the introduction of mobile apps and SMS banking, iBanking has been extended to mobile phone users, thereby allowing customers to manage their accounts from their own pockets. This is a huge competitive advantage for the firm when placed alongside our rivals.

How do you see banking in Myanmar changing in the future?
As Myanmar continues on its rapid economic growth trajectory, the banking sector can expect to see more reforms that will allow it to meet the growing demand that has arisen as a result of the country’s economic development. The ASEAN Economic Community (AEC), which is scheduled to come into force by the end of 2015, will greatly liberalise the flow of goods, services, investment and capital across the member countries, allowing for far greater levels of intra-regional trade. With its geographical position at the crossroads of China, India and several other key ASEAN states and its abundance of rich natural resources, Myanmar is well positioned to benefit from the economic developments in the region. As a major source of leverage for the economy, the banking sector is expected to lead this acceleration in economic growth.

Currently, the top five private banks in Myanmar account for around 80 percent of the sector’s products and services. As their slice of the pie continues to expand, the demand for additional capital is expected to drive consolidation and merger opportunities, as regulators look to create and enhance a new regulation framework – including, among other things, a significantly higher minimum capital requirement.

What does the future look like for AYA Bank?
As the only bank in Myanmar to achieve full IFRS compliance, as well as the first to introduce, successfully implement and operate a centralised core banking system along with a fully functional mobile and internet banking system, AYA Bank has been at the forefront of the country’s banking industry for some time. With the advent of a new banking era, the technological advancements made by AYA and its young workforce – where the average age is under 27 – have already fed into the sector’s general growth efforts.

The governance structure at AYA Bank is both top-down and bottom-up: the board of directors includes professionally qualified and highly regarded non-executive independent directors who ensure that the bank stays in line with corporate governance standards. The bank is also moving towards the adoption and rollout of a customer-centric, omni-channel strategy: by transforming its business into a universal banking platform, AYA’s customers will have access to uniform and holistic banking services.

With its strong branch and ATM network and innovative technologies, AYA Bank will increase the cross-selling opportunities of all financial products to its customers, offering more lucrative non-interest services in order to achieve long-term sustainability.

Having always endeavoured to sit at the forefront of banking innovations and industry development, AYA Bank is confident that it is and will remain well poised to tackle future challenges: as Myanmar’s banking sector continues to intertwine more and more closely with the global financial market, the need for a more efficient financial sector and comprehensive risk management policies within the country will only increase.

AYA Bank aspires to be the best in the country. Rather than focusing on size or profitability, the real emphasis is on escalating staff capacity, building and sharing ideas with customers, transforming businesses into plug-and-play platforms in order to accelerate entrepreneurship, and having an overall deeper social impact on the community at large.

All of this, which must be achieved while maintaining corporate governance standards and embracing sustainable progress in the exciting Myanmar banking landscape of tomorrow, firmly distinguishes AYA Bank from its competitors, both within the region and beyond.