Each year, some of the world’s most influential business heads meet in the highest city in Europe to participate in discussions about pressing global issues. Murray Stassen looks into the WEF’s Annual Meeting, 2014 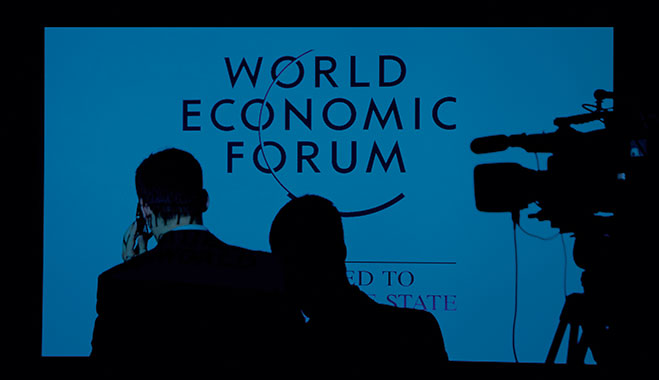 In early 2014 Davos-Klosters plays host to the 44th Annual Meeting of the World Economic Forum (WEF). Over 2,500 attendees will congregate in the picturesque alpine municipality to discuss and debate global political, economic, technological and environmental issues.

Political scientist Samuel Huntington coined the term “Davos Man” to describe those who are not limited by nationality or national boundaries. He said that they “see national governments as residues from the past whose only useful function is to facilitate the elite’s global operations”.

Overlooking global concerns from afar
The Davos Man and Woman will meet on neutral ground, high up in the Swiss Alps, to participate in workshops, panels and discussions concerning the world below them. For more than four decades, various politicians, academics, business leaders, members of civil society and the press have attended the event.

[T]he annual WEF meeting at Davos is a platform for ideas, experience and insight to be exchanged

The WEF was founded 42 years ago as a non-profit organisation by University of Geneva business professor Klaus Schwab. The inaugural meeting in Davos saw around 400 European business executives come together to discuss matters of economic concern.

“When we started, it was a small, family affair, with not more than 400 people, focused mainly on management issues,” said Schwab, in an interview with the Financial Times in 2008.

Originally named the European Management Forum, the name was changed to the WEF to reflect the organisation’s varied international objectives. Davos isn’t just a gathering of “fat cats in the snow,” as Bono famously said in 2006; the annual WEF meeting at Davos is a platform for ideas, experience and insight to be exchanged.

“I always insist the Forum is not a decision-making body. The WEF is a body that enlightens people, helping them to make better-informed decisions. The rest is up to them,” said Shwab, speaking to the FT in 2008. “The big global challenges cannot be met by governments, businesses or civil society alone. A cooperative platform, a global forum is needed, which unites societal forces to improve, as our mission states, the state of the world.”

“I am convinced that instead of being mired in pessimism and burnt out by crisis management, we have to look at the future in a much more positive, much more constructive, or in other words a much more dynamic manner.”

Members of the press

He adds: “At the same time the complexity, interconnectivity and velocity of the global system represents ever increasing systemic risks combining a dynamic, upbeat approach, bold vision and even bolder action with the necessary measures to strengthen risk resilience is critical for a successful future, thus our theme Resilient Dynamism.”

The 2013 meeting saw 50 heads of state, 500 members of the press and more than 1,500 business leaders from the Forum’s 1,000 partner and member companies in attendance. Some of the primary issues that were focused on were published in the 2012 Global Risks Report in the weeks preceding the event.

Challenges described in the report included the increasing gap between rich and poor or “income disparity,” economic inequality measured by the Gini coefficient. Rising government debt was also on the agenda in the midst of the eurozone crisis. Other issues outlined included growing unemployment and the wider recovery from the global economic downturn as well as rising carbon emissions.

Each year at Davos, speakers from business, politics and civil society take the stage to share thoughts with the audience, giving reporters a few lines of quotable quips and candour. Speaking at the Global Education Imperative, UN Secretary General Ban Ki-Moon, stressed the importance of education.

“As a boy, I studied in the dirt. There was no classroom. Education made me what I am; it made my dream come true… I shared my message with refugee children: Don’t lose hope, study hard. I did it, you can do it too.”

In his Special Address, UK Prime Minister David Cameron expressed his disdain for the euro. “When you have a single currency you move inexorably towards a banking union and forms of fiscal union, and that has huge implications for countries like the UK who are not in the euro and are frankly never likely to join.”

Davos often attracts mainstream media attention due to the attendance of high profile celebrities from the entertainment and tech world. In 2013 Charlize Theron accepted an award at the opening Crystal Awards ceremony for her humanitarian work carried out with the Charlize Theron Africa Outreach Project.

Theron told the audience “I feel like I’m getting smarter just by osmosis.” Adrian Monck interviewed the inventor of the World Wide Web, Tim Berners-Lee, in a one-on-one session about the problems with social networking. “A hacker to me is someone creative who does wonderful things,” said Berners-Lee.

Dialogue at Davos 2014
The 2014 WEF meeting will attempt “to develop and shape global, regional and industry agendas”. The theme will focus on The Reshaping of the World: Consequences for Society, Politics and Business. The Forum describes the aims of the 2014 event to “develop insights, initiatives and actions necessary to respond to current and emerging global challenges.” The executive summary outlines key areas that will be focused on regarding global, regional, economic, industry and business, and the future.

Conflict and political unrest have been prevalent running up to the 2014 meeting. In the wake of the Arab spring, incessant unrest in North Africa and the Middle East continue to limit the potential for peace and economic prosperity in the region. The war in Syria has resulted in more than two million refugees seeking safety in neighbouring countries, such as Lebanon, Jordan and Turkey.

The 2014 WEF meeting will attempt “to develop and shape global, regional and industry agendas

These nations are beginning to struggle with the magnitude of the crisis. According to the UN, close to nine million Syrian people are in desperate need of foreign aid. These are but some of the challenges faced by political and business leaders in their pursuit of making the world a better place.

Apart from the various socio-economic dilemmas that have developed as a result of conflict and political unrest, dialogue at Davos is also likely to be shaped by global environmental, social and economic issues such as climate change, multilateral trade as well as the post-2015 development agenda. Climate change in particular will be a top priority at Davos in 2014.

Writing for Business Green, Dominic Waughray – Senior Director and Head of Environmental Initiatives at the WEF – stressed the importance of promoting dialogue about the changing climate.

“While it is important to appreciate that the Forum does not itself form policy or reach decisions, and is instead a catalyst for ideas and solutions, it is dedicating an unprecedented number of sessions at the next Annual Meeting in Davos-Klosters in early 2014 to climate change,” wrote Waughray.

“The World Economic Forum could be the ideal place to bring together scientists, government leaders and private sector actors to better understand the problem and find ways to address it.”

Multilateral trade is also expected to be the subject matter of many conversations, in light of several global free trade agreements that are currently being negotiated. The first of which is the Transatlantic Trade and Investment Partnership (TTIP) between the EU and the US.

Secondly, there are talks under way between Pacific nations for the Transpacific Partnership (TPP). The post-2015 development agenda will also be at the top of the list as the eight UN Millennial Development goals come to an end in 2015. There have been several notable parliamentary elections in 2013, for example in Iran, Italy and Australia and as the new members of government begin to implement their policies, business leaders and decision makers will want their voices to be heard as they begin to form new relationships with their foreign counterparts. Following the release of the WEF Global Gender Gap Report 2013, the matter of gender equality is expected to be of utmost importance at Davos 2014.

Gender equality
Introduced in 2006, the Global Gender Gap Report measures the progress of 136 countries in the last year by means of ‘economic, political, education and health based criteria.’

The ranking system used in the report is “designed to create greater awareness among a global audience of the challenges posed by gender gaps and the opportunities created by reducing them.” Gender equality is a matter of great concern due to the political and economic landscape being dominated by men in most of the world.

In a blog post written for the WEF, authors Deborah Steinborn and Uwe Jean Heuser stress the importance of greater female representation for the benefit of the wider economy. “It makes sense for companies to open their cultures to both genders. This is perhaps the last great economic adventure, and one which can be profitable for all,” write the authors of Think Again! How the Economy is Becoming More Feminine.

Certain developed countries such as the US and Australia, ranking at numbers 23 and 24 respectively, are lagging behind developing nations like Lesotho and South Africa, who sit at 16 and 17.

Assumptions about who might be at Davos is never wise – as attendance cannot be guaranteed for the incredibly busy Davos Man, however one distinguished attendee is Africa’s richest man, Aliko Dangote, who has been appointed co-chair of the annual meeting. As of March, 2013 his wealth was estimated by Forbes to be in the region of $16.1bn.

Echoing the UN Secretary General’s advocacy for improving access to education, the GEFI basically aims to put every single child in school. Klaus Schwab wrote in his invitation letter to Dangote that his “participation as co-chair will contribute significantly to the substance and relevance of exchanges between global leaders from government, business, academia, civil society, and the media at the forum.”

In spite of the media attention Davos receives for the protests, the exclusivity, the lavish dinners, the alleged million dollar parties thrown by tech billionaires and the speculation about the private words exchanged outside of the official sessions; there is possibly no better stage for the most influential men and women to meet and discuss how to make the world a better place. When one is able to see the wealth and influence of the participants as a force for positive change, Davos-Klosters can be seen as a platform for incredible political, social and economic progression.

As idealistic as this may seem, the young global leaders, social entrepreneurs, tech pioneers, media leaders and spiritual and cultural leaders representing their countries, businesses and communities at Davos really do have the power to eradicate starvation, resolve conflict, educate every child and ensure that our earth is habitable for generations to come.

Bill Gates, a humanitarian and regular Davos attendee, has told of a letter sent from his mother to Melinda Gates before their wedding. She wrote “from those to whom much is given, much is expected.” As the WEF’s motto is “committed to improving the state of the world,” Gates’ mother’s words may be well be considered by Davos Man and Woman as they arrive in Switzerland in January for their annual meeting.