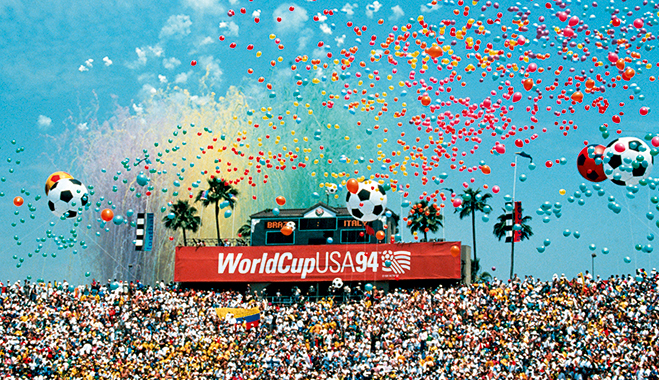 The last ceremony after the World Cup final match between Brazil and Italy in Los Angeles, 1994. Each World Cup provides a vital opportunity for the host country to showcase itself globally
Strategy

The FIFA World Cup allows the host nation to showcase itself globally for a whole month. It attracts vast television revenues, legions of visitors and impressive ticket sales. However, as Brazilians have learnt, the event also puts the host nation under economic strain and a merciless spotlight.

The US World Cup launched a new era of slick commercial management. Hosted in several cities and supported by big-brand sponsors such as Adidas and Coca-Cola, it delivered a total profit of $620m to LA alone during the final – $440m more than the Super Bowl made in the same year. Overall profits are estimated at $1.45bn against total costs of $5.6bn. Even better, the US leveraged long-term gains by establishing its successful Major League Soccer.

The 16th FIFA World Cup was held in France for the first time, and featured 32 teams instead of the usual 24, with the final staged at the new Stade de France in Paris. The organisers promised an economic bonanza based on 500,000 extra tourists. In fact, fewer visitors came to France than in a normal year, suggesting that non-football fans stayed away. The tournament was actually won by France, making it the sixth country to win on home soil.

In an economic experiment the tournament was staged in two countries – Japan and South Korea – and it worked. This was also the first World Cup to be held in Asia, and the last one in which the golden goal rule was implemented. An accommodating FIFA promised each country $110m for hosting the event and allowed them to keep all the revenue from ticket sales. With over three million live spectator tickets on offer, the host nations split $1.2bn.

The World Cup in Germany would mark a turning point for FIFA. A huge commercial success, it pulled in 15 million more visitors than forecast and sponsoring companies sold about $3bn worth of products. Similar to the US, Germany pumped its €56.6m in profit into the German Football League to the long-term benefit of the game, but a year later FIFA took back ticketing rights. The final game attracted an estimated 715 million viewers worldwide.

FIFA was the big winner from South Africa’s World Cup, taking home a massive $3.36bn in revenues. But the event was disappointing for the host nation, which invested $3.9bn on staging the event, including $1.3bn on stadiums and most of the rest on rail, airports and highways. It attracted half the number of expected tourists at an average cost, according to economists, of $13,000 each. Economic growth also slowed from 4.6 percent to 2.6 percent during the event.

Brazil scored several own goals in the lead-up to the World Cup. Stadiums were finished at the last minute, allegations of corruption were rife, promised projects in light rail and other transport – key elements of the winning bid – were scrapped, and protests over the $14bn price tag only served to highlight glaring inequalities in living standards. On the bright side, England – a big contributor in terms of tickets, television rights and tourists – qualified.

The budget for Russia’s World Cup has already been set at $2.1bn, but, in the light of the runaway costs of the Sochi Winter Olympics in 2014, few expect organisers to stick to that figure. Meanwhile, FIFA’s reserves have swollen to $1.43bn, boosted by US interest. In April, Fox Sports paid between $400 and $500m for English-language television rights. “The financial outlook is very positive,” FIFA Financial Director Markus Kuttner said in June.

Liberal politician Boris Nemtsov claims Qatar has already started spending the $70-100bn earmarked for its gold-plated tournament in eight years time. But will the oil-rich Gulf state actually be allowed to stage the event following accusations of corruption? FIFA’s special investigator Michael Garcia is due to report his findings before the Brazilian tournament ends, but many commentators are sceptical about the depth of his research.