Italy needs to rectify its malfunctioning political system if its economy is to get back on track, and so Matteo Renzi’s reforms must not be blocked 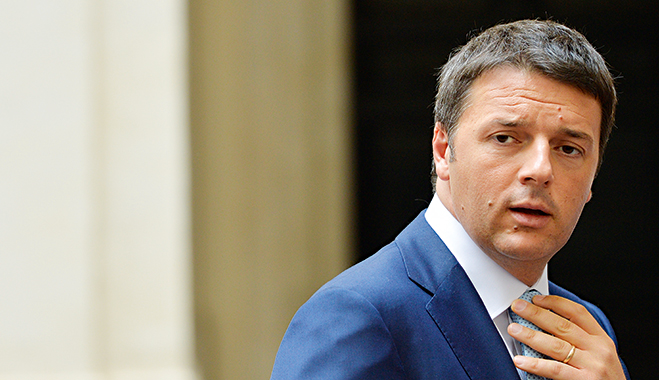 Italy’s prime minister, Matteo Renzi. The leader is pushing for a series of reforms that will give a majority government more power when it comes to implementing reforms
Government policy | Infrastructure
Author: Aaran Fronda

Italy’s Prime Minister, Matteo Renzi, is close to performing a minor miracle that will play a crucial role in helping the country make the constitutional and economic reforms that it so desperately needs. In January his government passed a measure that, if accepted by the senate, will limit the size and, therefore, power of the upper house to block laws. The upshot being that his government, which holds a majority in the Chamber of Deputies, will possess the power to implement the prime minister’s extensive reform agenda, which aims to boost living standards and strengthen the overall economy.

Italy’s political system is notorious for its inefficiency and corruption, characteristics that its prime minister says must be shed if the country has any hope of climbing out of the economic abyss it finds itself in. It is why he is also attempting to pass a new electoral law in the lower house, with the purpose of producing a clear winner in the next general election.

Overall, the reforms are good news for a country in desperate need of jobs, but Italy is going to need to do a lot more to revive
its economy

Traditionally, the country has suffered because its numerous political parties have each struggled to garner enough votes to secure a significant mandate to govern. The new proposal, however, states that, if no party can win a majority (more than 40 percent of the vote), a run-off between the top two parties will be staged to assure the newly elected government commands the necessary authority to ensure the political cogs can keep moving – something that is essential if Italy is to meet the challenges it faces with any sense of conviction.

Labour rules
So far, real progress has been limited due to political gridlock. Even so, Renzi has managed to approve the key parts to his overhaul of labour market rules, which aims to boost job creation in a country haunted by high unemployment, especially among its young people, with the youth unemployment, as of January 2015 sitting at 41.2 percent – the lowest it has been for over a year, but still far too high (see Fig. 1). The Jobs Act also intends to boost women’s participation in the workforce by improving policy on parental leave and providing quality child care for mothers looking to enter work.

The new labour market rules, having eased firing restrictions for large private sector companies, have helped reduce the use of temporary contracts. It is estimated that more than 200,000 people will see their employment status switch from temporary to a new type of permanent contract, which will offer minor compensation in the event of dismissal with that amount increasing with seniority in an effort to meet employees and private sector employers somewhere in the middle.

The new labour rules already appear to have made an impact, with car manufacturers Fiat and Chrysler echoing similar sentiments to those of Telecom Italia, who recently unveiled plans to hire 4,000 people.

“We are again recruiting, after seven years”, Chief Executive Officer of Telecom Italia Marco Patuano said. “We need to strengthen our workforce by introducing new professional skills into the company, with young technicians and graduates between 20 and 30 years of age. We will be recruiting up to 4,000 people over three to four years, using the new regulatory tools the government is developing.”

“[Our] new industrial plan envisages around €10bn [$10.62bn] of investment in Italy in the next three years, over €1bn [$1.06bn] more than in the previous plan. Thanks to this significant increase in innovative investments”, added Patuano. “By 2017 we will reach 75 percent of the population with optic fibre and over 95 percent of the population with the 4G mobile network, positioning us as the leader in the infrastructure development of the country and thus getting closer to the targets of the Digital Agenda for 2020.”

An unprecedented path
Despite its apparent short-term success, Renzi’s Job Act has been met with criticism from those inside his party, as well as heads of trade unions, who contend that the reforms dismantle basic workers’ rights. Overall, the reforms are good news for a country in desperate need of jobs, but Italy is going to need to do a lot more to revive its economy if it hopes to make a significant dent in unemployment figures over the long term. At least that is the view held by the Secretary-General of the OECD, Ángel Gurría, who said that the over-arching message of the 2015 OECD Economic Survey of Italy is a straightforward one: a lot done, a lot more to do.

“Italy is progressing on an unprecedented path of reform, that will not only boost growth and employment, but that, being a core country, will also bring confidence at the systemic, European level”, said Gurría. “Strong political courage has been necessary to advance this agenda. The Italian government should continue with this determination to complete the work. The reforms will also enable more resources to be directed to vital areas such as education, a fairer social safety net, improved support for job seekers and key infrastructure investment.”

Challenges ahead
The truth is, Italy is in bad shape. The financial crisis has helped devastate economies across the eurozone, but even before it hit, Italy’s economy had begun to stagnate, with growth in real GDP per capita averaging just 0.7 percent between 2000 and 2007, compared to the OECD average of 1.7 percent over the same period. In fact, since 2011, the economy has been shrinking, and was flat in the fourth quarter of 2014.

Italy’s poor economic performance is underpinned by substandard levels of investment in education that are necessary to provide its citizens with the skills they require to find work in today’s economy. The country also ranks far behind other OECD members when it comes to many quality indicators such as jobs, earnings and housing.

Renzi’s reforms, however, can boost average annual per capita GDP growth by six percent over the next 10 years, which may not sound like much, but considering that the Italian economy has only grown four percent since the euro was first implemented 16 years ago, a figure worse than Greece, it is a massive step in the right direction.

While the changes that Renzi and his administration have begun to implement are positive, as always, the main threat to the country’s economic recovery is its political system and the members comprising it. Silvio Berlusconi, a man whose reputation precedes him, has been a thorn in Italy’s side for some time, and now it seems he wishes to cause his fellow countrymen yet more problems. Il Caimano (The Caiman), as he is affectionately, or perhaps not so affectionately known, is eager to challenge Renzi in the senate, asking for the support of his party (Forza Italia) to block the prime minister’s constitutional reforms. But for the sake of Italy’s future, many will be hoping The Caiman has lost his teeth.