The issue of executive pay has brought the ire of both workers and shareholders. Yet recent reforms have gone some way towards repairing the damage 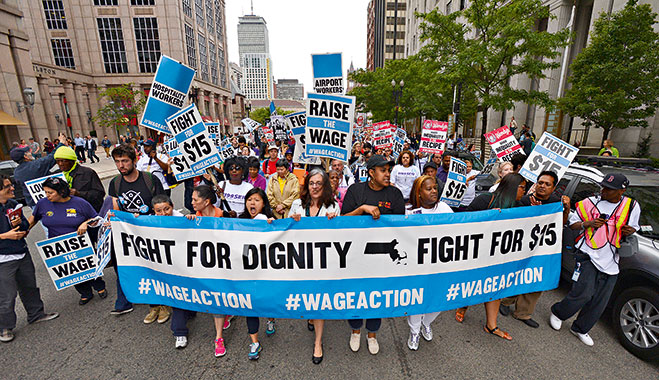 Pictures of a particularly jovial bunch of workers were splashed across the internet earlier this year when in April the CEO and founder of credit card processing firm Gravity Payments took a quite spectacular stance. Responding to an academic paper that said any salary under $75,000 could threaten workers’ emotional wellbeing, the company’s CEO Dan Price set about making $70,000 the minimum annual pay for his 120 staff.

Justified on the basis that better pay promises to generate profits in the long term, the hike has put Gravity in and among the ranks of America’s most admired companies. Taking over four years to implement, Price reduced his almost seven-figure salary to $70,000 and took a chunk out of Gravity’s earnings, though not without a great deal of fanfare.

Introduced in a time when the chasm between employee and executive pay is something of a hot topic politically, Price’s methods – while extreme – prove that there is real and growing pressure to take seriously the issues of rising executive pay and income inequality.

Sceptics have suggested meanwhile that Price’s sympathies, while commendable, will do little to powder the company’s financial complexion, with radio host Rush Limbaugh going so far as to proclaim: “It’s going to fail.” The fact remains that this is a privately-held company of only a few dozen employees, and one that shares little in common with the oft-criticised corporate giants, whose executive hand-outs number in the millions and executive-to-worker pay ratios in the hundreds.

Both sides of the debate feed into a far broader point about the balance of pay in the workplace, and the issue of whether executive remuneration for those at the world’s leading firms is at all justified stands idly in the firing line.

Rising executive pay
Figures provided by the Economic Policy Institute show that inflation-adjusted US executive pay in the period through 1978 to 2013 increased 937 percent, more than double what the stock market expanded in the same period. More important is the degree by which it eclipsed the 10.2 percent rise for typical workers. Whereas in 1965 the CEO-to-worker ratio stood at 20-to-1, by 2013 the ratio had widened to almost 296, even with much of the population still reeling from a financial crisis.

A cursory glance at some of the worst affected industries – fast food for example – has the ratio higher than 1000-to-1, and such numbers, according to a Demos report, threaten to bring “troublesome implications for the economy and for the companies”, if they’re allowed to continue on upwards. “Rising executive pay has played a big part in pushing up income inequality in the past 20 years”, says Deborah Hargreaves, Director of the High Pay Centre. “The average pay package for a leading FTSE 100 CEO last year touched £5m – that’s a five-fold increase since the late 1990s, while average incomes have barely risen over that period. That has driven a huge wedge between remuneration for those at the top and everyone else.”

Having risen largely without challenge for decades, it’s only in recent years that offending pay packets have been subjected to scrutiny, in boardrooms, in the media and in the wider public domain (see Fig. 1). In this time, millions of Americans have fallen on hardship and boards under far greater pressure to deliver shareholder value, and the issue of dysfunctional executive pay has made its way to the fore.

Research shows that rising levels of executive pay have perpetuated a poisonous societal gap between the richest one percent and the remaining 99, and for as long as pay fails to reflect performance, the issue threatens to breed resentment on an as-yet-unseen scale. “Pay levels have increased for highly skilled and highly talented individuals in many occupations – including athletes, surgeons, actors, professors, hedge fund executives, and software engineers – while the least skilled individuals in America keep falling further behind”, says Donald Hambrick, Evan Pugh Professor and the Smeal Chaired Professor of Management, Smeal College of Business, at The Pennsylvania State University. However, Hambrick adds that “rising executive pay plays a part — but only a minor part in America’s growing income inequality”, and the issue is not the amount paid out, but whether these sums are warranted.

Often justified on the basis that no less than stratospheric sums of money will drive candidates into the arms of competitors, a growing disconnect between achievement and reward is an issue more deserving of attention. “Current levels of executive pay are certainly off-putting, even offensive, for many Americans. But there’s no objectively defensible way to say that executive pay, or the CEO-to-worker ratio, is ‘too high’. How would we make such a determination?

“It’s important to recognise, for instance, that the CEOs of companies owned by private equity firms are paid just as highly as are the CEOs of publicly-traded corporations – after controlling for company size, industry, performance. Namely, owners who are vigilant, powerful, and intent on securing the best possible executive talent for their companies pay very handsomely to executives.”

Few would contest the point that any CEO capable of rescuing a major corporation from collapse is deserving of a multi-million dollar pay packet, though too often these same extraordinary sums are being paid out to those responsible for less-than-extraordinary work.

A pattern of rejection
For example, Barrick Gold took to the headlines in April when the company disclosed that 75 percent of shareholders had voted against its pay policies in a recent ‘say on pay’ vote. Chief among the grievances was an almost $13m pay package for Executive Chairman John Thornton, which in no way reflected the firm’s ever-so-slight improvement, both in terms of financial performance and share price.

Likewise, oil and gas major BG Group lopped millions off the top of its executive pay package late last year before the incoming Helge Lund took to the helm. Shareholders claimed that an initial share reward of £10m ($15.8m) for the first year marked an attempt to sidestep BG’s usual remuneration policy, and that the sum was far and above his $2.1m package at former employer Statoil.

Still, the discontent aired recently is far tamer than in the so-called shareholder spring of 2012, though remains an important trigger point for listed companies, particularly in instances where similar such grievances have been expressed previously. This growing pressure has brought greater rewards for the executives in question, according to some.

“Over the past 30 years”, says Hambrick, “increased pressures from activist investors, boards, and the press – especially in the form of more CEO dismissals – has made the CEO job riskier, thus contributing to increases in CEO pay.” Others claim, however, that a sharper focus on performance-linked pay has succeeded in putting a lid on wayward salary increases, and engagement with the issue has played a vital part in building more of a back-and-forth between boards and shareholders, and in raising transparency.

Having grown used to year-upon-year of double digit pay hikes for executives, analysis published by PwC in April showed that this trend could be grinding to a halt. Data for early 2015 showed that executive pay levels fell in real terms, and early signs indicate that 45 percent of FTSE 100 executives went without a salary increase in the period up to March 25.

“Companies are improving disclosure of bonus payments and targets in response to investor demands, writes Tom Gosling, Head of PwC’s reward practice, in a recent blog post. “Over the last few years investor pressure and regulation have led to a significant raising of the bar in executive pay. On the whole the right balance has been struck. Companies can still pay enough to attract talent, but the highest levels of pay are getting tougher to earn, with an improved link between pay and performance.” Changing the rules
Whereas reports that suggest executive pay is spiralling fast out of control are widespread, the truth is rather that a changed policy stance, together with a growing engagement with shareholders, means that companies are exercising a far greater degree of restraint. Disclosure requirements are in fact far stricter today than they have been previously, and boards are more seriously considering recommendations put forward by shareholders.

As with a 2013 proposal to make disclosing the CEO-to-worker pay ratio a requirement, one newly proposed SEC rule to link executive pay to performance, if passed, would signal another important step on the road to more closely aligning company rewards and achievements. “These proposed rules would better inform shareholders and give them a new metric for assessing a company’s executive compensation relative to its financial performance”, says SEC Chair Mary Jo White of the rule. “The proposal would require enhanced disclosure that can be compared across companies.”

While it’s clear that a real and growing pressure to clamp down on wayward executive pay exists, it wasn’t until the Dodd-Frank Act was first signed into law that the US government took issue with the idea of pay detached from performance – at least outwardly enough to push for reform. Believing that on some level the issue was responsible for the 2008 crisis, policymakers in the US have made known their commitment to keep a lid on the discrepancy, and the shape of executive pay has changed – albeit ever-so-slightly – as a result.

“There has been some pressure from investors over huge pay-outs, for example at BG group, but generally, shareholders tend to be very complacent about big pay awards. Shareholdings are very dispersed and international and shares are held for short periods, meaning that investors don’t engage enough on pay”, says Hargreaves. “We need to tackle big pay gaps by broadening the membership of remuneration committees that set pay – currently they are mostly made up of executives, former executives and bankers, all of whom have benefited from a culture of high pay.”

Findings on the subject show that double digit pay hikes in the present climate are rare, and boards with a finger on the pulse are introducing measures that mean they can claw back bonuses, should any candidate fail to reach stated performance targets or fulfil their minimum contracted stay. Claims that executive pay is out of control are inflated, to the point that discussion on the topic is mostly ill informed and misdirected, though this isn’t to say that it does not warrant attention.

While the issue is driving a wedge between the top and everyone below, increased disclosure requirements and oversight mean that executive pay is no longer hidden from view, and proposals must stand up to shareholder scrutiny before they’re passed.

It’s imperative, therefore, that firms keep to these rules and, in doing so, enter executive pay into a period of stability. Only then will the issue of income inequality fade from the list of issues raised by workers and shareholders, and breed trust in much the same way Gravity did this year.