Seismic events have rocked Europe, but the continent can regain the initiative

Europe currently faces an array of challenges, many of which have been caused by the US. Fortunately, this also presents an opportunity for the continent to reaffirm its global influence 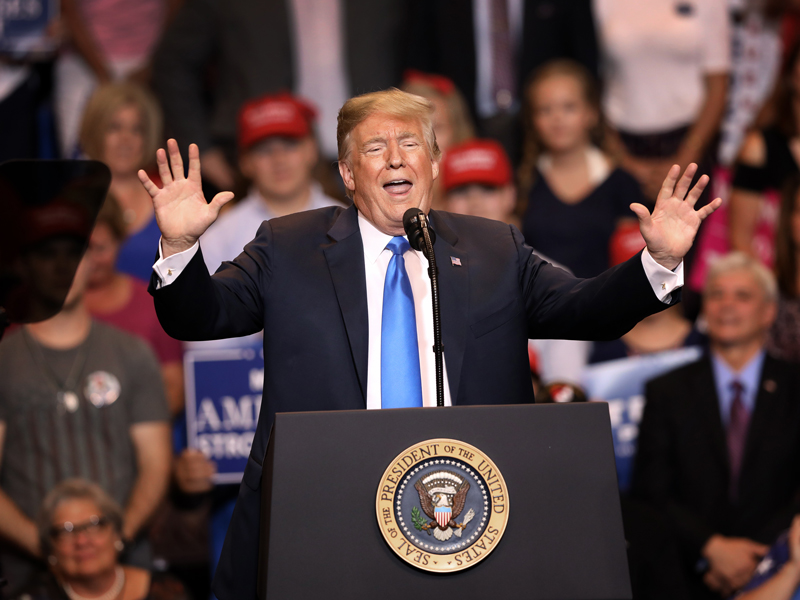 On March 01, 2017, I wrote an article for World Finance, explaining that the UK, through Brexit, “will be weaker outside the EU, as it will shift from a privileged partner and influential decision-maker inside the EU to a mere observer”. Just 15 days later, I wrote another article explaining that although the EU is facing a historic crisis, it is time for realism.

When French President Emmanuel Macron delivered a speech at the Sorbonne University in Paris on September 26, 2017, he said: “The Europe we know is too weak, too slow, too ineffective.”

Following this, it took me many weeks to crystalise what I believe of the current European situation and what I would subsequently write. Despite the vast volume of global events and topics, which are rapidly developing moving targets, and my attempts to put the ocean in a cup (by that, I mean this article), I came to a conclusion involving six events that I believe signpost the beginning of a new era of uncertainty for Europe.

US isolationism
Surprisingly, most of the following six events and their consequences were caused by Europe’s closest and most important ally: the US.

The current American administration, with its famous ‘make America great again’ slogan, persists in a tactless and one-sided approach to combatting world challenges. In doing so, it neglects its alliances – including the EU and, in particular, Germany, despite the latter remaining a close friend to the US since the end of the Second World War. Here I recall Gerhard Schröder, Chancellor of Germany from 1998 to 2005, in his exemplary speech shortly after the September 11 attacks in New York, as he offered absolute solidarity with the US.

Trump runs the US administration as though he is running an enterprise. What’s more, he is determined in this approach, even if it requires undermining the values that have long reflected the foreign policy of his country. Trump doesn’t want to compromise on certain issues, and he will always revert to his ‘America first’ stance, which may well lead to a ‘USexit’ from the western world order. In the end, the US could end up pretty much alone.

Walking out
The first event is, of course, Brexit, which will undoubtedly leave Europe with fewer tools with which to combat its uncertainties and weaknesses. It is worthwhile – and regrettable – to mention in this context that the current tactic employed by the UK Government to show its willingness to tolerate a no-deal scenario, while undoubtedly intended to strengthen its negotiating position, is not a wise move. It could lead to lots of nervous discussions, which will further deepen European uncertainty.

In August, UK Prime Minister Theresa May was resisting the EU’s timetable for Brexit talks, pushing for them to be postponed until the end of November (interestingly, the G20 summit takes place in Buenos Aires, also at the end November). Many believe she is hoping that President Trump might help her, though I have to wonder what help she is expecting from Trump, who in July advised her to sue the EU.

The second significant event was the US quitting the Paris climate change accord, and in doing so disregarding internationally proven steps to avoid the worst effects of global climate change. Historically, the US and Europe have acted together to fulfil these moral obligations and act as a trustee for the natural wealth of future generations. Unfortunately, however, all the endeavours of influential European leaders like Macron and Merkel to keep the US in the accord were made in vain.

Breaking deals
The third event was when Trump pulled the US out of the Iran nuclear deal. Before his historic summit with North Korean President Kim Jong-un in Singapore in June, Trump raised the ceiling of his threats against Kim’s regime to the highest level. Yet suddenly, the cloud of tension eased and Trump announced his willingness to negotiate with North Korea. That being said, the summit has yet to yield tangible results.

In this context, I do not expect things to go the same way with Iran as with North Korea; the reason being that France, the UK, Germany, China and others continue to support the agreement and Iran’s position. Here, European nations are not undermining the values that have long reflected their foreign policy, and are respecting their agreed commitments.

Additionally, Iran isn’t a completely isolated country, unlike North Korea. It is also important to mention here that the hard line regime headed by Mahmoud Ahmadinejad, President of Iran from 2005 to 2013, survived much more arduous global sanctions, which Europe was a part of.

Trade wars
This brings me to the fourth event: the US firing the opening shot in a trade war with its biggest trading partner by deciding to impose tariffs on steel and aluminium imports from the EU.

So far, the trade actions taken by the Trump administration have been relatively modest and have had limited effects on the global economy

The outcome of the G7 summit in Québec, in my opinion, was the trigger for allies and partnerships worldwide to unexpectedly reorient trade towards China. The good news is that we are still many steps away from a tough global trade war. The bad news is that the risks are rising and, through a potential global trade war, I believe a recession is inevitable. In this context, let us hope the Federal Reserve, with its new Keynesian-oriented approach, is not raising interest rates too quickly. This is key because the US Treasury yield curve currently indicates that the economy is going into recession. However, an inverted yield curve can be expected from several rate hikes made in a short period of time, with the curve remaining at the three percent level.

So far, the trade actions taken by the Trump administration and its trading partners have been relatively modest and have had limited effects on the global economy and financial markets. The next round of $100bn-to-$200bn tariffs between US and China, new auto tariffs and European retaliation tariffs (estimated by some to eventually be worth as much as $300bn) may be more confrontational. Given such a scenario, it is no wonder that Trump is targeting the international currency market.

Further afield
The fifth event was the Shanghai Cooperation Organisation (SCO) summit, which took place in Shanghai this June. China, Russia and the other participants belonging to the SCO (including India and Pakistan) now represent more than 40 percent of the worldís population and more than 20 percent of world trade. The SCO is striving to achieve a mutual drive to become a leader in the post-western world order.

Finally, the sixth noteworthy event was the annual NATO summit in Brussels, and shortly thereafter the Russia-United States summit in Helsinki. In terms of the latter, in Europe it was speculated that Trump might use his meeting with Russian President Vladimir Putin to scare the EU and to force it to compromise on trade, as well as other things.

It’s no wonder then that at the start of August, after meeting with European Commission President Jean-Claude Juncker at the White House, Trump said that Europe would be “a massive buyer” of liquid natural gas (LNG), before adding that the US has “plenty of it”. In the same context, during a recent White House press conference with Italian Prime Minister Giuseppe Conte, Trump said part of the US-EU trade talks involved expanding America’s reach into the continent’s gas markets. He also mentioned that he is expecting the EU to build (and pay for) between nine and 11 ports, so that the US can ship LNG to various parts of Europe. It seems Europe prefers to depend on Russia, however, as Russian gas is much cheaper than that of the US.

A new world order
Trump’s policies reflect his personal vision of the world, and the issues he has launched on the American-led international order and global trade system show how far this vision meets the views of his party. The Republican Party is still largely behind him, and is also behind the major changes in US foreign policy.

Trump is trying to meet and fulfil the electoral promises he made to his voters, and in this respect he is doing well

Trump is trying to meet and fulfil the electoral promises he made to his voters, and in this respect, he is doing well. Every government has the right to review its strategic alliances in order to ensure the seriousness and reasonableness of those alliances.

Currently, the Trump administration is particularly focussed on containing China by imposing trade tariffs. These measures are well matched with many European strategies to contain China as well.

Furthermore, there can no longer be any doubt that Europe is in an unprecedented crisis following these six events. Trump has also declared that the EU, NATO and the World Trade Organisation are bad for America, and so Europe has to realise that it can no longer rely on the US in trade or security issues. The old rules of the game are no longer valid.

Nonetheless, crises and challenges are the best drivers for radical change and subsequent betterment. The re-balancing of and competition for power between the US and China can be profitable for Europe, as the EU can act as a stabiliser between these two powers. The UK must continue to side with Europe, in particular with regards to the Iran nuclear deal and the Paris climate change accord. I am fairly certain that Brexit negotiations will eventually result in a continuing ‘close partnership’ with the EU.

Through careful but confident steps, Macron and Merkel – the two most powerful leaders in the bloc – have shown signs of cooperation in pursuit of long-delayed reforms at the EU level. A positive sign from Macron was his revival of the idea of a ‘multispeed Europe’, which was suggested by Merkel, in order to reform the EU after Brexit to make Europe stronger and more efficient.

It is time for Europeans to pursue a grand strategy together, in order to regain Europe’s global power and independence

The EU now has to take charge of itself in issues of security and shared defence. Europe has to invest in defence, taking on the US’ role and making sure all member state understand that the bloc is acting in their interests. If the EU succeeds in this task – and, in the case of the US, reverses its unusual foreign strategy – this would be excellent for Europe.

Ultimately, it is about time for Europeans to pursue a grand strategy together in order to revive and regain Europe’s global power and independence. Europe must decide what it wants to be by 2050. The grand strategy of the EU’s future should include public opinions and views supported by the opinions of Europe’s professional institutions. Europe has to keep standing for what it did at the end of the Cold War, when it loyally pursued transatlantic cooperation. Europe must now develop to be the cornerstone of encouragement for many other countries in the world in order to keep a fair, rules-based international order.

Mourad Mekhail is a former Wall Street banker. He earned his Master of Business Administration in International Economies from Trier University, Germany. Since 2011, Mekhail has served as Advisor to the Board of Directors at Kuwait International Bank, following his previous assignment as Head of International Investment.