The gig economy and its long-term effects

As more employees turn to self-employment, the rise of the gig economy could have far-reaching effects on the corporate employment model 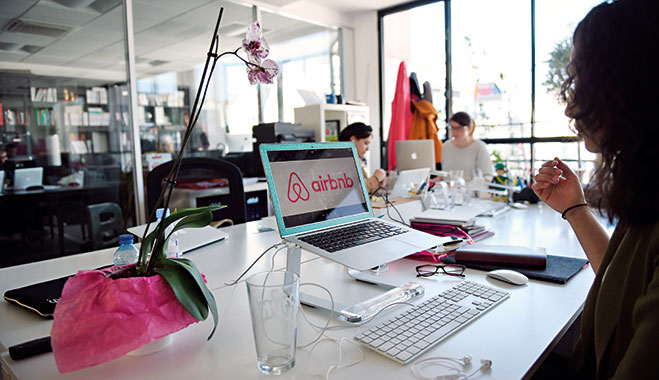 Offices of Airbnb, a company that has championed the gig economy
Management | Strategy
Author: Elizabeth Matsangou

The technological era has caused a major shift in all aspects of life, including the way we work. As such, online consumer driven services, free communication channels and globalised networks have created a much bigger space than ever before for outsourcing, contracting, temping and freelancing. Aside from the far greater ease and convenience in which companies can now employ non-permanent staff, the appeal of greater flexibility, more money-making opportunities and an enhanced work-life balance are luring increasing numbers into the ‘gig economy’.

Despite the increasingly popular trend, participants face an array of challenges that would leave many resigned to staying in traditional employment. At present, the majority of the labour force still prescribe to a conventional format, whereby they work an agreed number of hours for a set number of days per week for one employer, and usually with a permanent contract in place. In return, they receive a fixed and regular wage, which provides them with long-term financial security.

In addition, permanent staff are reassured in knowing that undoubtedly, they will receive paid annual leave and paid sick days, as well as a specified notice period. Additional employment benefits can differ considerably depending on the country, region, employer, or even the job itself. Health insurance is a common job perk in the US for example, while in Europe; employees tend to be offered more holidays each working year than their American counterparts. In essence, such pre-determined conditions and benefits widely help to keep the conventional employment dynamic in tact.

Despite the comfort of a financial safety net and having paid time off, many have grown weary of the lack of freedom that comes with the nine ‘til five paradigm

The dawn of a new age
Despite the comfort of a financial safety net and having paid time off, many have grown weary of the lack of freedom that comes with the nine ‘til five paradigm both in and outside of the workplace. Moreover, the monotonous routine can feel stifling, which can lead to career dissatisfaction. Some people thrive when working unsupervised, while the variety of contract work can make for a refreshing challenge each day of the week.

The gig economy is also especially helpful for those with young families, particularly women, who now have easier access to earning a wage at home or at times that suit them most. Although the figures have not yet been accurately quantified, it is clear that the number of gig workers is growing rapidly.

This shift in employment, which is still in its nascent stage, is very much a 21st-century phenomenon. “I think the opportunities for people who want to be gig workers has expanded significantly over the last five years; there’s now a much wider range of opportunity, in part mediated by digital platforms of different kinds that makes it possible for someone who actually wants to be their own boss and who wants to run a small business of one as a way of making a living”, said Arun Sundararajan, Professor of Information, Operations and Management Sciences at New York University.

Simultaneous to the materialisation of such technological platforms is a generational mind-set shift in regards to full time employment and entrepreneurship, which has also supported the realisation of the gig economy.

Essentially, the current generation is less predisposed to the shackles of a traditional employer and a set pay packet, and as Sundararajan explained, “the notion of entrepreneurship is far more in the cultural dialogue than it used to be 10 or 15 years ago, and that could also be a contributing factor”.

Given the increasing number and scope of sharing economy platforms, such as Airbnb, Lyft, JustPark to name but a few, millions around the world are signing up to participate in the gig economy, either as their sole income or as a means to augment their current earnings. In terms of the latter, countless individuals are now putting their spare time to economic use by retailing their creations on Etsy, content writing through Freelance.com or selling photographs on Flickr. As such, peer-to-peer exchange is undergoing a mass revival at present, which has been made possible through a visible change in societal consciousness. “I think that over the last 10 years there has been a drastic improvement in the digital trust infrastructure. A big barrier in the past to widespread peer-to-peer exchange was the fact that you would rather buy from a company because you trusted their brand”, Sundararajan told World Finance. Yet there is now a wide range of digital signals available that make people more inclined to deal with semi-anonymous peers, including online review systems and digitised versions of real world social capital, such as Facebook and LinkedIn profiles. “All these different facets to your personality can create a much richer digital persona that makes people comfortable when interacting with you”.

Supporting the gig industry
Just as gig working can increase one’s earnings to an unlimited degree, the opposite can also be true, as pay can vary drastically, and by no means has a fixed minimum. For many, the ‘feast or famine’ style of income can be difficult and stressful; this fluctuation in earnings can make it difficult to save for the future, which is exacerbated further by not being entitled to some form of a retirement package or pension contribution. Then there is the formidable issue of no sick leave – if gig workers are unable to work, they simply do not earn.

The issue of health insurance is particularly troubling for gig workers in the US, given that citizens cannot fall back on national healthcare as they can in European states. In addition to being expensive, the process itself of obtaining medical insurance can be difficult and overbearing. “What a typical corporate human resources department does for you is really filter your choices”, explained Elizabeth Woyke, Business Reporter and co-author of Serving Workers in the Gig Economy. “Whereas online exchanges can take hours, it’s very confusing and you don’t really understand what is the best choice for you; so I think that in the health insurance space, it’s confusion over the wealth of options.” Moreover, the predominant reason why many US citizens choose to obtain health insurance through their employer is because doing so significantly lowers the price through attaining a group rate.

Gig workers also face the difficulty of filing personal taxes and keeping track of expenses, which may be a daunting task for those who are not versed in bookkeeping, or which of their outgoings are deductible. For example, Uber and Lyft drivers must keep receipts and tabs on their petrol consumption throughout the year; not doing so at every given opportunity can make a significant difference to one’s pay packet. Then there is the process and self-discipline of putting aside money each month for the year’s end, which can be financially dangerous for many not in the habit.

In response to the increasing number of individuals that are walking away from the traditional employment relationship (see Fig. 1), specialist human resources companies are now emerging to cater for them specifically. “Some of them are focused on ride sharing drivers, others are focused more on the Airbnb hosts, some are really quite general”, Woyke added. Although one such firm may be able to assist with taxes or another can help with acquiring the best healthcare package at a group rate, no one company will offer everything in the same way that a conventional employer does.

Gig workers however, are entitled to the same crucial safety net as the rest of the labour force. That said, now is the time for political decision makers and the wider community to engage in a discussion about how gig workers can be safeguarded. Fortunately for the freelancing community, the debate has already begun and more online advice is now available to assist with the various aspects of adopting an individualistic employment framework. “In fact, what’s interesting is that gig work and the gig economy has become a bit of an election issue here in the US”, Woyke told World Finance. A number of high-profile court hearings are also contributing to the public debate, a notable example being Uber, which has been involved in various legal cases around the world to determine whether its drivers are in fact employees as opposed to contractors.

of those in the UK earn up to

per week working in the
gig economy

At present, the role of the government in providing a safety net for gig workers varies considerably. In the US and the UK for example, the presumption lies on its provision through the full time employer, whereas Scandinavia’s flexicurity model is in its very nature aligned for providing welfare to gig workers. “The bottom line is, if you’re a country where the safety net is tied very closely to full-time employment, the short-term role of the government should be in facilitating the creation of a new funding model for a safety net – that is an individual government market partnership”, Sundararajan explained.

A modern economy
The gig economy is clearly here to stay. “If you think about it, the reason we have the gig economy is because of huge macroeconomic forces, like globalisation of work, global trade, outsourcing and technology shifts like the rise of smartphones. I don’t think anyone thinks that any of those trends are going away certainly, and so I think the gig economy is not either”, Woyke commented.

It represents a transition that is currently underway in the global economy – a new era in which employers can take their pick from talent across the world, as well as flourish with the help of the creativity and innovation of ‘happy workers’. Likewise, employees can have more freedom than ever in choosing where they want to work, how they want to work and how long for, and even potentially, how much they want to earn. Ultimately people can become the masters of their own careers, and in effect, of their own lives. Although there are various obstacles to be overcome in providing the support that gig workers need, this will come in time and when it does, the sky’s the limit for all.

Sundararajan is optimistic about what the gig economy can mean for the future. “I think that as we start to fulfil more of our everyday economic needs through peer-to-peer exchange, it’s going to shift how much we trust other people in general and [it will] potentially increase the level of trust that we have in society. I also think that there is an opportunity here for peer-to-peer exchange to be equalising in terms of income distribution, and the reason why I think this is because historically people who own the means of production tend to see a faster rate of growth in their wealth than people who simply provide labour.” Gig workers on the other hand are now able to own a small portion, and with the ownership of society’s production engines being more evenly distributed, the equalisation of wealth could be actualised one day in the not too distant future.