Climate change and its stormy relationship with the insurance sector 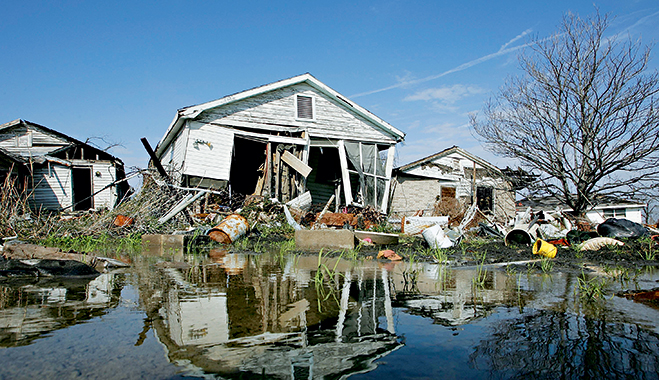 Assuming that the findings from last year’s Intergovernmental Panel on Climate Change (IPCC) are accurate, the financial ramifications of rising temperatures could number in the trillions of dollars if the circumstances are allowed to go on unchallenged. “We live in an era of manmade climate change”, said Vicente Barros, Co-Chair of the group responsible for the report. “In many cases, we are not prepared for the climate-related risks that we already face. Investments in better preparation can pay dividends both for the present and for the future.” And in an age when global warming is exasperating extreme weather conditions and inflicting major pains on affected communities, the contribution of the insurance industry should not be underestimated.

In developing countries, where the dangers are most acute, the annual price tag attached to climate change-induced damages could soon tip the $100bn mark, as rising seas lay waste to coastal communities and other such areas without the requisite defences. True, the risks are well documented and the costs of inaction clear, yet under-threat areas and industries – not least insurance – have been slow to stem the losses, for want of a better understanding about where exactly their focus should lie.

False assumptions
Businesses can no longer assume that their day-to-day operations will perform uninterrupted, and the increased risk of climate shocks, described at length in the IPCC report, means that affected parties must make certain concessions or risk collapse. Of the industries exposed to climate change, few can match the seriousness of the situation facing insurance, and the circumstances here have prompted key names to make often-fundamental changes to their strategies and operating models, if only to survive the coming storm.

In developing countries, where the dangers are most acute, the annual price tag attached to climate change-induced damages could soon tip the $100bn mark

“Climate change represents one of the greatest long-term risks of change for the insurance industry”, says Ernst Rauch, Head of Munich Re’s Corporate Climate Centre. “There is uncertainty about the dynamics of these changes and where they will occur. To adapt and manage to these profound changes of the risk landscape, detailed data and deep expert knowledge is key as well as the development and application of risk modelling tools, reflecting changing patterns of weather catastrophes.”

However, although the changes made so far are noticeable, they stop short of the necessary transformation. “While the insurance industry is concerned about climate change, we have noticed that our clients, mainly insurers and reinsurers, have become more concerned about the continued upward trend in losses that largely results from exposure growth”, says Jayanta Guin, Executive Vice President of the risk modelling software and consulting services company AIR Worldwide. “Because most insurance policies are written for a short term (often one year), they are in some sense more concerned about the view of risk in the next few years, and less concerned over climate change that will occur over the next several decades.”

Without first recognising that climate change warrants attention on a global scale, or acknowledging that the industry has an important part to play in informing policy on climate change, insurers will fall flat. True, climate change may have found a way into risk modelling, yet the relationship is worth little if not explicitly stated and acted upon.

Learning by example
Hurricane Katrina, for example, illustrates just how much damage so-called extreme weather events can inflict on the industry, and shines a light on what inaction and oversight can bring. Although almost half of the affected population had no flood insurance, the $25bn in claims for those who did still managed to bankrupt the federal flood insurance programme. The programme, which was born of a desire to bail homeowners out of a crisis and protect taxpayers from shelling out additional funds, failed on both fronts, to the point where the government was forced to cough up an added $15bn to meet the costs. The shortfall still represents only a fraction of the overall costs tied to the catastrophe, and Swiss Re figures show that Hurricane Katrina was responsible for the loss of 1,836 lives and $71bn in insured losses. Statistics cited by the Insurance Information Institute also tell a story of how the hurricane then generated the largest single loss in the industry’s history, with over 1.7 million claims totalling $41.1bn and stretching six states. The takeaway from the disaster, however, is not necessarily that natural disasters can wreak havoc on any given location, but that climate change is something that warrants action if insurers are to survive the not-too-distant future.

“Because the very concept of climate change is that the past will not fully predict the future, the insurance industry has been, and must continue to be flexible to make operational changes as needed”, says Lindene Patton, Global Head of Hazard Product Development for CoreLogic Insurance and Spatial Solutions. “The operational fundamentals remain the same – using underwriting, actuarial science and natural catastrophe modelling. But the marketing, regulatory negotiations and consumer environment interaction must change. To date, those changes remain elusive.”

Though 2005 caught the eye, it was 2011 that really set the world alight, with insured losses relating to natural catastrophes costing upwards of $127bn (see Fig. 1). Unfortunately, the record-breaking year served only to highlight just how slow the industry had been to react to what remains a priority concern. One Ceres report released in 2013 showed that in the year after only 23 of 284 companies surveyed had a strategy for action on climate change. “Every segment of the insurance industry faces climate risks, yet the industry’s response has been highly uneven”, said Mindy Lubber, Ceres President in the report foreword. “The implications of this are profound because the insurance sector is a key driver of the economy. If climate change undermines the future availability of insurance products and risk management services in major markets throughout the US, it threatens the economy and taxpayers as well.”

With temperatures rising, developing and developed countries alike run the risk of increased floods and drought, and World Bank findings show that large coastal cities could face combined annual losses of $1trn by 2050 as a result. True, major names are funnelling more money towards finding creative solutions and defences are much improved on generations passed; yet the threats facing insurance are huge. Whereas weather-related losses averaged at some $50bn annually in the 1980s, the same amount today is close to $200bn. What’s important for the industry today, therefore, is that major names hone their focus on risk modelling and recognise climate change as a priority. Once a standalone spreadsheet, catastrophe modelling has evolved to the point where it today resembles an all-encompassing risk management approach. Rather than taking a very limited standpoint on the issue of climate change, the strategy looks to big data and scientific analysis for answers, and by opening up these platforms, the industry has been able to more easily share and strengthen data on the subject.

“We believe that, even today, climate change in many regions is already having a definite impact on weather related losses”, says Rauch. “We therefore have to factor these changing loss patterns into pricing models in our industry. Since the influence of climate change increases with time, the insurance industry must recognise, quantify and make allowance for these developments in good time in the form of risk-capital and risk-price adjustments.” And by taking a proactive approach to mapping the financial risks posed by climate change, the industry can more easily understand and so resolve the risks knocking at their doors.

“The framework of catastrophe models lend itself nicely to incorporating and quantifying uncertainties associated with climate change”, says Guin. “Our clients are increasingly being asked by regulators and rating agencies to explain what they are doing to manage climate risk and, in turn, our clients are looking to us to keep them apprised of the current state of the science and to educate the regulators and rating agencies on what the catastrophe models currently capture.”

In fact, the industry’s contribution to climate change mapping has been so great that many have labelled insurance perhaps the most important link in tying together the many facets of a low carbon economy. Broken down into its simplest parts, insurance is a risk management tool, and if the industry can arrive at a working set of solutions for mapping climate change, all businesses in all nations can operate with more assurances about the future.

“The modelling data and analytic solution set is available to address the risk of climate change and is being applied by the industry, but it’s not merely a question of access”, says Patton. “Additional steps are needed to underscore the importance of investing in risk management to the customer base through an appropriate means of addressing the question of ‘who should pay?”