Latin America has danced to the rhythm of commodity prices for quite some time. However, for Chile, Peru and Colombia, there is promising evidence to suggest that the dance is beginning to slow in line with economic reform 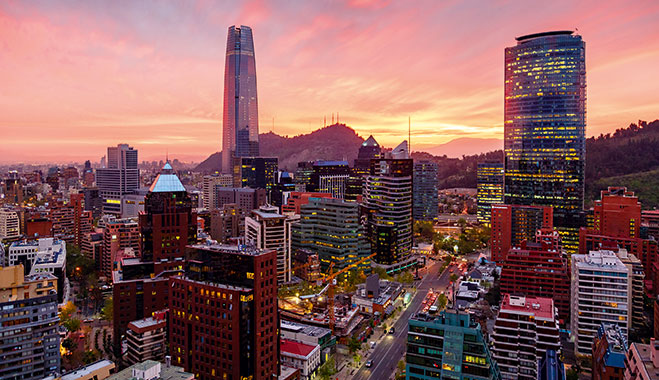 For decades, Latin America has been the world’s quarry. Here you can find a diversified supply of agricultural and mineral products, from soybeans, meat and coffee to copper, silver and oil. However, this situation has made the region very sensitive to its prices. The region’s economic and financial performance dances to the rhythm of the evolution of commodity prices, with correlations of 0.57 with next year’s GDP, 0.52 with equity and 0.53 with foreign exchange. In the last year, this strong link has made this part of the world a high-return region in the eyes of financial markets.

These high correlations are consequences of structural issues regarding certain Mercado Integrado Latinoamericano (MILA) countries – traditionally made up of Mexico, Peru, Colombia and Chile. Peru’s share of mineral exports still hover above 50 percent (similar to the state of oil in Colombia and copper in Chile), while non-traditional exports are around 30 percent (and for Colombia this is decreasing).

What makes matters worse is the fact that the share of these products on fiscal revenue for each of these countries is even higher. Therefore, an abrupt reduction in commodity prices has a real impact on economic activity and fiscal position. This means that, in the short term, equity returns for these countries are expected to be slightly lower than their neutral return, in line with such a commodity downswing.

Consumption patterns
Nevertheless, there are promising signs that the dance might slow down in the next couple of years, especially for MILA countries. These countries have increased their reliance on domestic demand, which in our metaphor is equivalent to dancing to their own beat. Between the years 2000 and 2013, domestic demand relative to GDP increased its importance by 20.2, 8.3 and 10.4 percent for Chile, Peru and Colombia respectively. These countries also have a demographic bonus that, according to the UN, will keep their dependency ratios under 60 percent for the next few decades (see Fig. 1). This change will have an enormous impact over consumption patterns, market size and even national competitiveness.

Secondly, since the 1980s, these countries have implemented reforms that have reduced their vulnerability to external shocks and enhanced the competitiveness of their non-tradable sectors. While the average current account deficit in the 1980s was 4.5 percent of GDP for these countries, in the last 10 years this deficit has been just one percent of GDP. Furthermore, the average inflation for these countries in the 1980s was 200 percent, while in the last 10 years it has barely surpassed three percent. The average government net debt has reduced from 24.1 percent in 2000 to 7.6 percent in 2013 (the foreign currency denominated debt followed a similar pattern).

Better still, each of these three countries has reason to believe in a more diversified and solid growth path for the next few years. Although Colombia’s oil prices accounted for 53 percent of its exports for 2014, its bet on the 4G Road Infrastructure Programme (47 projects worth $25bn) will reduce its dependence on oil and increase the competitiveness of the rest of the economy.

In a similar way, in order to reduce its tango with metal prices, Peru has recently updated its national strategic plan based on improvements in education (increasing expenditure to six percent of GDP), a reduction of the infrastructure gap (through private public partnerships) and productive diversification through attachment to global value chains and regulatory simplification.

Finally, while Chile still relies on copper prices, its track record of sound macroeconomic policies, institutional strength and development of non-traditional exports (salmon and wine come to mind), foster opportunities for a reduced role of copper in its future growth.

A blessing in disguise
The current downswing in commodity prices may be a blessing in disguise because it has put these countries’ equity at a very attractive valuation relative to the past, with a price-earnings ratio of 13.7 compared to a five year median of 15.2. Meanwhile its peers, both in emerging Asia and EMEA, are slightly over this five-year median. However, selectivity is going to be key in order to identify the firms that will rebound faster and stronger from the current level.

This decoupling from the commodity dance has been even clearer for fixed income assets. On the one hand, funding through external debt for MILA and in general Latin American governments has been switching to local debt financing, which at the end of 2014 represented a stock of almost $2trn, only surpassed by Asia.

This change has substantial implications for the insulation of government finances from commodity shocks. A local market with better liquidity and depth has been created, since today local institutional investors (pension funds, insurance companies, mutual funds and banks) share a common platform with international investors to trade and improve the secondary market, and benchmarking to local corporate debt. In addition, governments may now match their funding in the same currency as they expend the resources and issue long-term bonds (even tenors longer than 30 years), which diminishes the currency and duration mismatch in fiscal accounts. Finally, it has created a ‘high-beta’ asset class to which international investors are increasingly adding exposure, in spite of the correlation with commodity prices.

On the corporate fixed income side, the participation of MILA and Latin American companies in global US dollars denominated REGS/144A corporate debt market has skyrocketed: over the last 10 years corporate annual issuance has increased more than 700 percent and the outstanding of corporate debt now exceeds $400bn, representing almost 35 percent of the asset class benchmark. Not so bad for a region with such correlation to commodities.

In fact, the truth is that today Latin American metals, mining and energy sectors represent less than 25 percent of the benchmark, with the remainder more fundamentally dependant on internal demand. This increasing importance of the internal demand driver is the main reason companies that achieve certain critical size and the ability to access international funding come to the primary market every year, regardless whether they have an investment grade rating or they want to issue 10 or 30-year bonds. Equity space
As for equities, the impact of commodity prices across government debt, both external and local, and corporate debt, has brought an opportunity to gain exposure to a region where gradually, the fundamental dependence on commodities is expected to decrease with time.

In the equity space, the investment environment since the second half of 2014 has been characterised by extreme correlation, regardless of company fundamentals. For example, the main Colombian equities performed in a very narrow range, losing between 27 percent and 30 percent in US dollars, regardless of each company’s industry, as a result of the 50 percent drop in the oil price (the country’s principal export). This steep drop in value includes companies whose fundamentals are unrelated to the oil price (such as certain electric utilities), and even companies that actually benefit from the decrease in commodity prices.

A case in point is Avianca, the leading Andean regional airline, which fell 28 percent in the second half of 2014 despite facing a significant margin increase as a result of the collapse in the price of jet fuel. Avianca now trades at a 50 percent price-earnings discount compared to global airlines. This increase in correlation, and the accompanying disregard of country and company fundamentals, seems to be the result of foreign capital flows exiting the Latin American markets indiscriminately. This can be seen in the diminishing assets under management invested in regional exchange-traded funds, such as Colombia’s iColcap and Peru’s EPUs (iShares Peru).

In this environment, Credicorp has acted as the ‘liquidity provider’ in the Andean markets. Our fund managers have been buying selectively in the face of massive liquidations by foreign investors that, in our opinion, are unable to differentiate between the companies and sectors that will be affected by the commodity collapse and those that will not. We believe the current investment environment represents an opportunity for patient, long-term investors, who can weather the volatility related to market flows and wait for value to surface.