Mexico could soon see a resurgence in interest from foreign investors

While Mexico’s sovereign bond market is perhaps the most promising of all emerging economies, squeamish foreign investors can be credited for the recent downward trend, leading some firms to advise on the side of caution, says SURA Investment Management 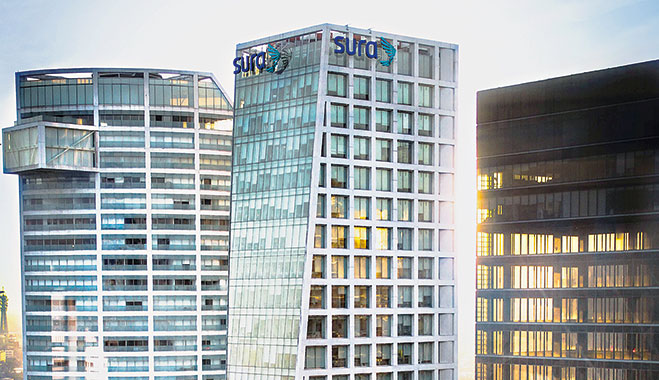 With a total value of $340bn, the Mexican sovereign bond market is one of the biggest and most liquid among emerging economies. It also has one of the largest foreign holdings, with 39 percent in the hands of offshore investors at its peak in 2015. This factor makes this market particularly sensitive to changes in the mood of global investors, as evidenced by the current decline in foreign holdings to 35 percent, which signals the shrinking appetite of global investors for Mexican debt.

Analysing the trend of foreign holdings is crucial given the impact it has on our customer portfolios and three big local actors: the Mexican Central Bank (Banxico), the Ministry of Finance (SHCP), and the National Oil Company (Pemex). Understanding the necessity of an analytical approach is the reason why World Finance spoke with Senior Economist José E Flores and Eduardo Mora Donato, Fixed Income Portfolio Manager, from market leader SURA Investment Management, about the behaviour of Mexico’s ‘big three’ and capital outflows due to changing trends in foreign appetite for Mexican sovereign debt.

A tug-o-war tale
The story begins with two well-known events: the expected normalisation of US monetary policy and the drastic fall in oil prices since the second half of 2014. The first one is important because foreign investors consider the spread between Mexican and American benchmark rates when deciding whether to maintain their positions on Mexican sovereign debt. While the second is important as the perceived credit quality of Pemex factors into the premium that investors demand from the local government curve in order to compensate for the default risk. “The reason for this is that, historically, Pemex has contributed a third of the federal government income”, said Flores.

As the US economy continues to improve – as shown by several indicators – including the declining unemployment rate and increasing core inflation – it is expected the Federal Reserve will continue the hiking cycle that it began last December.

“In order to keep the spreads attractive to foreign investors when this happens, Banxico will need to hike in the same magnitude as the Fed, otherwise it risks accelerating the current downtrend of foreign holdings in the sovereign bond market”, said Mora. “It’s this rhetoric, which has been emanating consistently from Banxico for the last 18 months, that has given some support to the M Bonos, the better known and most liquid government bonds. However, other less important instruments, namely Cetes (treasury bills) and Udibonos (inflation linked bonds), have sharply fallen out of favour with foreign investors, thus hurting valuations. What is clear is that any change in the expected path of hikes in either country could alter the landscape, so there is high risk of exacerbating the negative trend.”

The impact of oil prices is considerably more difficult to analyse as the consequences are felt all the way through to public policies. There are, however, two indicators showing that pressure has been building: Mexico’s credibility as a debtor and the value of its currency. Evidence of the first indicator can be seen by credit spreads that are widening more than the average of comparable emerging markets.

“This happened in complete disregard of a balanced macro environment with low inflation, manageable fiscal and external balances, positive economic growth, structural reforms and a positive perspective anchored on US recovery”, said Flores. “Similarly, the Mexican peso, one of the worst performing currencies since mid-2014, was one of the few emerging currencies that continued its depreciation versus the USD during 2016. The question is, why are investors singling out Mexico from other emerging markets, despite its better macroeconomic backdrop? At SURA we believe the answer to this question must consider the finances of both Pemex and the federal government.”

During 2015, thanks to the promise of public spending cuts by the SHCP and high expectations of structural reforms, global investors perceived Mexico as a safe place to invest. Banxico itself highlighted the importance that the spending cut was adequate in order to reduce the public deficit and keep under control the excessive growth rate of the public debt, which by 2015 had reached 48 percent of GDP (a 26 percent growth since 2012).

The success of these measures, coupled with the depreciation of the real exchange rate, should have improved net exports and compensated for the downturn in economic growth. However, by the end of 2015, it became evident the fiscal target would not crystalise. Consequently, global investors were disappointed and so reassessed Mexico’s credit quality (see Fig. 1).

Concurrently, oil prices reached a 13-year low, which caused a sharp widening of credit spreads across emerging markets, as well as FX depreciation in commodity exporting countries. Due to Pemex, Mexico was among the worst performers: during the previous 12 quarters, Pemex had accumulated multibillion losses that were piling up fast. It therefore soon became clear the company would need a bailout from the government, which would further worsen already fragile public finances.

Tough decisions
In an effort to calm down sentiment, Pemex announced it had let go of 10,000 workers in January, but to no avail. Consequently, the federal government appointed a new CEO for the company who has extensive experience in restructuring. Weeks later, with a more benign economic backdrop derived from better global activity data, Banxico and SHCP announced during a surprise press conference 50bp hike to the benchmark rate, a cut in government spending equivalent to 70bp of GDP for the current year and discretionary interventions in the FX market to defend the currency. This set of bold measures allowed the peso to recover and substantially improve the credibility of Mexico’s sovereign credit. “The sentiment improved further when the FOMC [Federal Open Market Committee] updated its projections for the 2016 and 2017 tightening cycle, which removed the concern of a Fed-induced recession due to an aggressive monetary cycle”, Flores said, adding: “By the end of March, Mexican debt was hit by yet another bout of anxiety, this time fuelled by investors realising that the previous month’s actions weren’t solving the real problems: namely, the peso’s appreciation was threatening the adjustment of external balances and the spending cuts were not enough to correct fiscal unbalances.” This mood worsened even more when Moody’s downgraded Pemex debt by two notches and changed Mexico’s outlook to negative.

As with previous events, SHCP and Banxico had to act on behalf of Pemex. This time, the former eased Pemex’s tax burden and announced a spending cut equivalent to 90bp of GDP in 2017. The latter allocated MXN 240bn (1.2 percent of GDP) from its 2015 capital gains to support public finances. Although these measures were effective in achieving the short-term objective of reducing credit spreads, they still left the main issue unaddressed: Pemex profitability (the company’s 2015 losses were MXN 500bn and MXN 265bn in 2014).

“In our view, Banxico and SHCP’s joint actions give support to Mexican sovereign debt by diminishing the likelihood of another surprise hike by the Central Bank in 2016”, said Mora. “However, as long as the main issues are not addressed – namely the need for Pemex’s restructuring in order to become profitable – Mexico’s spreads will trade at a premium relative to similar emerging credits. It is also essential that the federal government regains its credibility by showing a steady hand on cutting spending.”

Realistically, Pemex’s restructuring will be lengthy. In the short term, the company will be fully dependent on factors out of its control: governmental support and the recovery of oil prices. “In this context, it’s not surprising that the risk premium demanded by investors continues to be relatively high compared to other emerging markets”, said Mora. Moreover, if the current environment of oil oversupply and low prices continues, global risk appetite will be harmed, therefore prompting capital outflows and forcing Banxico to act more aggressively than the Fed.

“At SURA, we prefer to take a cautious stance”, said Flores. “Given that the market seems to be ahead of the curve with respect to oil supply adjustments and the limited availability for additional spending cuts within the federal government and Pemex, it is reasonable to expect a hawkish Banxico. As such, the further widening of credit spreads and capital outflows will exacerbate the already deteriorating external balances. This in turn could worsen the currency’s depreciation and derail inflation expectations. In our view, the risk that this poses to the financial system is substantially bigger than the one posed by an economy slowing down as a consequence of an environment with higher rates.

Flores concluded: “In terms of investment strategy, we favour the belly of the nominal M Bonos curve in the short term, as it will be more reactive to an aggressive Banxico by reducing any duration bets. The real Udibonos curve has always been less sensitive to hikes and, since it was hit harshly by investors during 2015 on the back of low inflation prints, it looks attractive right now. Inflation prints are mostly priced far below Banxico’s three percent inflation target, which we believe will be reached by the summer. So far this year we have benefited from this strategy and we expect it’ll continue to work well in the near future, thereby allowing us to continue with our ultimate objective of helping our customers to fulfil their investment and savings targets.”