Deutsche Bank’s fall from grace: how one of the world’s largest lenders got into hot water

Once the largest lender in the world by assets, Deutsche Bank’s reputation has been dented by allegations of money laundering, questions over its dealings with the US president and a series of profit warnings 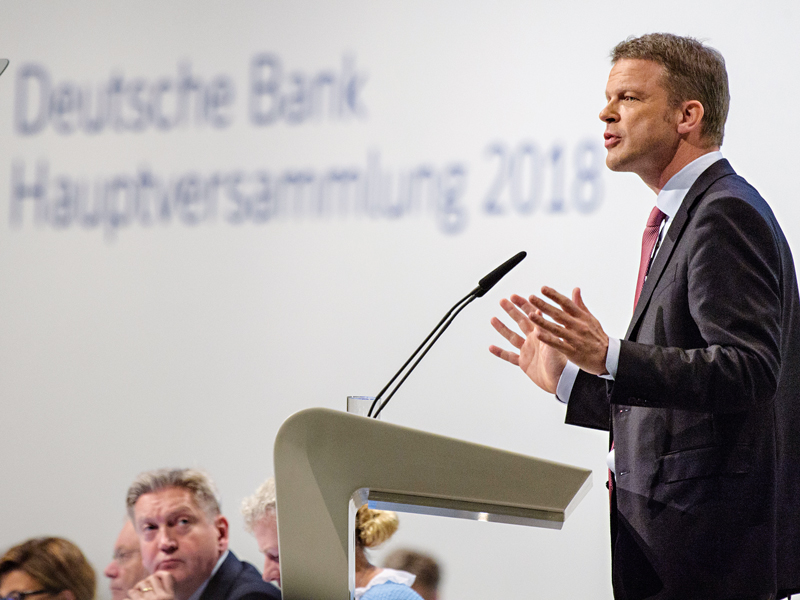 Deutsche Bank CEO Christian Sewing set out a cost-cutting plan in less than a month of taking the role, with the aim of trimming down the bank’s operations and restoring it to profitability
Banking | Commercial banking | Featured
Author: Sophie Perryer

On July 8, 2019, thousands of Deutsche Bank employees across the globe arrived at their offices, unaware that they would be leaving again, jobless, just a few hours later. In Tokyo, entire teams of equity traders were dismissed on the spot, while some London staff were reportedly told they had until 11am to leave the bank’s Great Winchester Street offices before their access cards stopped working.

The job cuts, which totalled 18,000, or around 20 percent of Deutsche Bank’s workforce, were the flagship element of a restructuring plan designed to save the ailing German lender. Wall Street’s top market observers have described the initiative as ambitious and radical, but it remains to be seen whether it will be enough to save the bank, which has come under intense scrutiny for dubious business practices in the wake of the 2008 financial crisis.

Chequered past
Deutsche Bank was founded in 1870 to promote Germany’s standing within the global trade market. It was the country’s first foray into international banking; prior to its establishment, German companies had to rely on British and French lenders to do business overseas, meaning they were often subject to unfavourable terms. Deutsche Bank opened its first branch in Bremen in 1871 but expanded rapidly into Asia and Europe, opening a Shanghai branch in 1872 and a London outpost the following year.

Its early growth was stalled in 1914 by the commencement of the First World War, in which the lender lost the majority of its foreign assets. It recovered quickly by pursuing a series of significant mergers, one of which, with German lender Disconto-Gesellschaft, allowed it to avoid the worst of the 1929 crash. Deutsche Bank’s role in the Second World War, however, is the source of much controversy: according to its own historians, the bank was involved in 363 confiscations of Jewish-owned businesses between 1933, when Adolf Hitler came to power, and 1938. It also loaned funds to the German Government to allow it to build the Auschwitz concentration camp, according to The New York Times.

The bank’s connection with Trump has come under intense scrutiny since his election, initially due to the investigation led by Robert Mueller into Trump’s relationship with Russia

At the end of the war, Deutsche Bank did not slink off quietly into the shadows as many businesses that had been involved with the Nazi Party did. Rather, “it [became] a leading force for the reconstruction, redevelopment and reunification of Europe”, The New York Times’ David Enrich noted. After several decades, however, the bank changed tack and began to go after the sort of riches and prowess that had, until this point, been concentrated on Wall Street. Its ploy bore fruit in the late 1990s when its $10.1bn acquisition of US investment bank Bankers Trust made it the fourth-largest financial management firm in the world. Buoyed by this success, in 2001, the German lender debuted on the New York Stock Exchange, positioning itself to take advantage of the astronomical rise of the US stock market in the mid-2000s.

Scandal upon scandal
In the aftermath of the 2008 crash, however, Deutsche Bank’s success began to unravel. It had been one of the largest purveyors of junk bonds, selling about $32bn worth of collateralised debt between 2004 and 2008, but its traders were also betting against that market in order to line their own pockets. Greg Lippmann, Deutsche’s former head of asset-backed securities trading, even referred to some bonds as “crap” and “pigs” in emails to colleagues, all the while promoting them to investors as A-grade.

The implication of this profiteering came home to roost in January 2014, when the bank was forced to pay a $1.93bn settlement to the US Federal Housing Finance Agency for its sale of subprime-mortgage-backed securities to now-defunct government agencies Fannie Mae and Freddie Mac. The sum broke the back of its profit margins; that quarter, it reported a $1.6bn pre-tax loss, heralding a loss-making era for the lender.

Since that time, the losses and lawsuits have come thick and fast. In April 2015, the bank paid a combined $2.5bn in fines to US and UK regulators for its role in the LIBOR-fixing scandal. Just six months later, it was forced to pay an additional $258m to regulators in New York after it was caught trading with Myanmar, Libya, Sudan, Iran and Syria, all of which were subject to US sanctions at the time. These two fines, combined with challenging market conditions, led the bank to post a €6.7bn ($7.39bn) net loss for 2015. Two years later, it paid a further $425m to the New York regulator to settle claims that it had laundered $10bn in Russian funds.

Questions have also been raised over Deutsche Bank’s relationship with US President Donald Trump and disgraced financier Jeffrey Epstein. The bank’s relationship with Trump dates back to the 1990s when it was attempting to get a foot in the door on Wall Street; having a high-profile property mogul like Trump on the bank’s books allowed it to chase after bigger and better clients. “Serving Donald Trump as a client was one way that Deutsche elbowed its way onto the world stage,” said Russ Mould, Investment Director at AJ Bell. The bank financed almost three decades’ worth of Trump’s deals and continued to lend to him despite multiple loan defaults until as late as 2016.

The bank’s connection with Trump has come under intense scrutiny since his election, initially due to the investigation led by Robert Mueller into Trump’s relationship with Russia, and latterly in relation to Trump’s tax returns, which the lender has so far refused to release despite being subject to a congressional subpoena. With regards to Epstein, Deutsche reportedly managed his finances long after his 2008 conviction for soliciting underage sex and only terminated its association with him in May this year, according to The Boston Globe.

Divisive vision
It was in the midst of this furore that, in April 2018, Deutsche Bank veteran Christian Sewing took up the role of CEO. In his typical pragmatic fashion, Sewing had set out a comprehensive cost-cutting plan in less than a month, aiming to trim down the bank’s operations and restore it to profitability. In a memo at the end of his first month in the job, he told staff: “It is our imperative to take tough decisions… We have to regain our credibility.”

July’s job cuts are the toughest measure to be introduced by Sewing yet, and signal to the market that he is prepared to ruffle feathers internally to achieve wider organisational goals. In a conference call to the media on the morning of the redundancies, the CEO highlighted the bank’s main errors as over-expansion, ill-thought-out capital allocation to failing corners of the business, and ignorance with regard to costs. His restructuring plan aims to tackle all of those aspects by trimming staff costs, spinning off underperforming divisions into a €50bn ($55.3bn) bad bank, and scaling back the organisation’s global network.

It certainly impressed Wall Street’s finest. JPMorgan Chase wrote in a memo: “[Deutsche Bank’s] restructuring, in our view, is bold and for the first time not half-baked but a real strategic shift giving up its Tier 1 [investment bank] ambitions. [Deutsche Bank] is rightsizing to where it came from originally.” UBS, meanwhile, commented that the plan shows a real willingness to change, writing in a note: “Progress over the coming quarters could then further increase the market confidence in the plan.”

However, the plan’s success is by no means guaranteed. Shares have fallen since the redundancies were announced as the implications of the high-risk, multi-year strategy began to sink in for investors. At the time of printing, Deutsche Bank’s shares were hovering around €7.64 ($8.48), a dramatic decline from the €32 ($35.31) highs seen in 2015 and a long way off the lender’s pre-crisis peak of €112 ($123.60).

But the greatest threat to progress is the money-laundering allegations that are currently swirling around the lender. These first emerged in November last year in connection with the Danske Bank scandal; the same month, Deutsche’s Frankfurt offices were raided as police searched for documents connecting the two lenders. The investigation is ongoing.

“The money-laundering accusations are a serious matter from a reputational, operational and financial point of view,” Mould told World Finance. “Regulators are clamping down hard and, after fines for sanctions busting, misselling toxic mortgage-backed securities, rigging LIBOR and money laundering over the past decade, investors will not be pleased if Deutsche has to pay further hefty penalties.”

Sewing is not ignorant of this possibility. In that regard, July’s restructuring is a shrewd move, as slimming the organisation will limit the damage if the money-laundering investigation does not go the bank’s way. It has also provided the opportunity to rid the bank of senior figures whose unscrupulous, profit-hungry attitude was instrumental in its fall from grace.