As well as being one of the most talked-about cities in the world, Dubai is fast emerging as the global leader in Islamic finance. Dubai Islamic Bank is well positioned to play a major role in consolidating that position 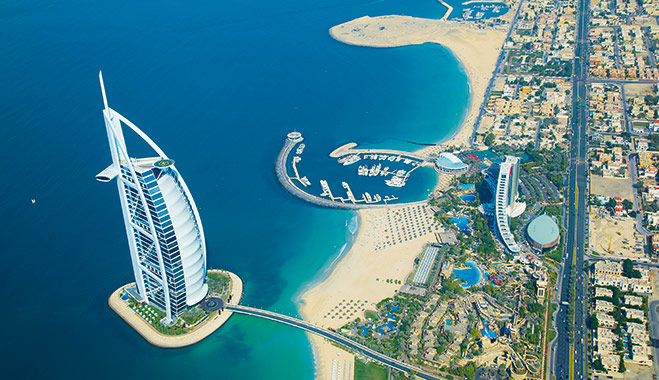 View of the Burj Al Arab from a seaplane, Dubai, UAE, where tourism has been on the increase. As well as a popular holiday hotspot, Dubai's banking sector is attracting attention on the global stage for its progress in Islamic finance
Banking | Islamic Banking
Interview with: Dr Adnan Chilwan, CEO, Dubai Islamic Bank

Globally the Islamic finance industry is worth close to $2.3trn and is expected to grow to $3trn by 2015. Dubai has long nurtured a desire to become the international hub for sharia-compliant banking, and recently an official mandate has been issued to that effect to position the emirate as the global capital of the Islamic economy.

Since it was established in 1975, Dubai Islamic Bank (DIB) has been trailblazing through the industry, setting new standards in the area of Islamic finance and paving the way to further the progress of this sector, which is fast gaining global acceptance. Recognised for its rich heritage and vintage, DIB is seen as a school of Islamic banking and finance, having received various accolades for innovation and advancements in this arena, giving a modern face to the industry over the last forty years.

Dr Adnan Chilwan, DIB’s CEO, is keen to capitalise on the bank’s four-decade-strong position in the industry. Appointed to the post in July 2013, Chilwan has immediately actioned the second phase of a two-pronged strategy of consolidation and growth. The first phase of consolidation was initiated in late 2008 with the aim to build a robust balance sheet and platform that would allow the springboard when the market and the economy rebounded.

With Dubai and the UAE economy clearly back on track, the bank is now moving on a clearly defined growth agenda, which not only focuses on the domestic market, but also on expansion into other parts of the Middle East, Asia and East Africa. Over the coming years, the UAE – and Dubai in particular – will be hosting a number of international events of considerable prominence and the Islamic finance sector is well established to play a key role in this development. Chilwan has spoken to World Finance exclusively about the challenges and opportunities ahead for Dubai and DIB.

Why is Dubai emerging as the global capital of Islamic finance?
Dubai is uniquely positioned, especially when you consider it from the perspective of banking and finance. Located right at the centre of the east and the west, Dubai has huge potential to provide continuity to financial entities across time zones as the markets open and close around the world.

With DIB pioneering Islamic banking here in Dubai in 1975, there can be no doubt of the ability of the emirate of Dubai to establish itself as the global capital of the Islamic economy. The achievements of Dubai and the UAE are now being recognised across the world.

Tourism, hospitality, transportation, trade and infrastructure are the backbone of this thriving nation, and today the residents enjoy possibly some of the best quality of life anywhere in the world. With the way the Islamic economy is progressing, I see this as an opportunity as well as a responsibility of leading players like DIB to support this ambition.

Over the last decade, the UAE as a nation has made huge advances in the Islamic finance industry, making the sector an integral part of general economic activity. Innovation in products and offerings coupled with the development of the necessary legal and regulatory framework across all financial sectors from banking, capital markets, and insurance has positioned us at its forefront.

The government itself has been a strong advocate of promoting and growing not just the Islamic financial sector but also the Islamic economy including the halal food industry, family-friendly travel and tourism, fashion and clothing, cosmetics and personal care, pharmaceuticals, and media and recreation. These different sectors that have developed and grown over the years are helping to establish Dubai as a major Islamic hub.

With regards to Expo 2020 in particular, how will future events change infrastructure investment in the region?
Dubai is fast becoming not just an event hub for the region, but is in a position to compete head-to-head with major cities around the world. Though the infrastructure to host such events successfully is already in place, the Expo2020 will give a further boost to civil works and development, tourism, transportation and logistics, technology and even alternative energy sectors adding to the already world class setup existing in Dubai.

Local and international investment – both financial and intellectual – will have a positive effect on trade, investment, technology, construction and other related sectors, not just in Dubai but in the UAE as a whole. Bank of America Merrill Lynch estimates Expo 2020 could boost GDP by $23bn or 24.4 percent between 2015 and 2021 (see Fig. 1) with an additional growth of 0.5 percent between 2016 and 2019, and two percent by 2021.

It is expected that around 300,000 new jobs will be created during this period, particularly in the area of construction, hospitality, transportation, logistics, retail and services. The already growing Dubai brand value will also get a significant boost, and is expected to grow by $8bn to $257bn, according to Brand Finance.

To what extent has the advent of Islamic finance helped boost the growth of SMEs in the region?
While Islamic jurisprudence encourages entrepreneurship to vitalise the economy, Islamic banks still lack offerings to actually support start-ups, especially small and medium size businesses. This is also due to the fact that Islamic banks could not finance start-ups in certain situations where assets are not available.

Islamic banking needs structured products such as quasi capital or hybrid structures for start up finance in order to limit the risk while simultaneously supporting ventures to flourish without mounting serious pressure on the venture itself. That said, DIB is committed to promoting this key sector of the economy and has recently launched a focused need-based SME solution based on the liquidity management and working capital finance requirements of this segment. We will continue to further refine our products and services to this sector, which we believe is key to the growth of any economy in the world.

How has Dubai Islamic Bank evolved during the recent boom in Islamic finance?
Given the impact of the global financial meltdown since 2008, we established a two-phase strategy spanning a period of eight years. The first five years (2009 to 2013) focused on consolidation, where the aim was to ensure that the fundamentals of the bank were strengthened from within as it navigated the turbulent markets during this period.

The key objectives of this phase revolved around strengthening the balance sheet, enhancing capitalisation, ensuring robust liquidity, arresting NPL growth and improving asset quality. Though, at the time, we were unable to predict the depth and tenor of the crisis, we had faith in the bank and Dubai, that both would rebound strongly when the markets improved. We executed the consolidation strategy like clockwork and this has now allowed us to initiate the second phase, which is growth.

We have established a strong franchise, particularly on the consumer front, which has helped to diversify our exposure significantly while continuing to maintain probably the best liquidity in the banking sector. This, combined with strong capitalisation, provides us with a robust platform to take advantage of the greatly improved and positive market conditions and trends.

DIB is a pioneer of Islamic banking and as the world’s first fully-fledged Islamic bank, we have nearly four decades of experience. Over the consolidation period, we have greatly expanded our product suite, enhanced our core systems utilising the latest technology and totally revamped our customer service platform. Innovation is at the centre of everything we do and will continue to play a key role in our drive to be the most progressive Islamic financial institution in the world.

What are the bank’s local and international expansionary plans?
Going forward, DIB is looking to expand its franchise not only in the UAE but also across some select and identified international markets. Locally, we will continue to enhance our consumer and wholesale business focusing on key sectors like SME, tourism, hospitality, trade and infrastructure development – all of which are expected to see a boost with Dubai’s EXPO 2020 win.

While we will be reviewing and rationalising our existing international presence in Pakistan, Sudan, Jordan, Bosnia and Turkey, we have already identified new geographies in Far East, Middle East, East Africa and the Indian subcontinent where we are looking to enter with an individually tailored strategy for each country.