It has been a challenging few years for the Vietnamese market but now, as the country begins to increase international trade, its prospects are looking brighter and it is attracting investors in their droves 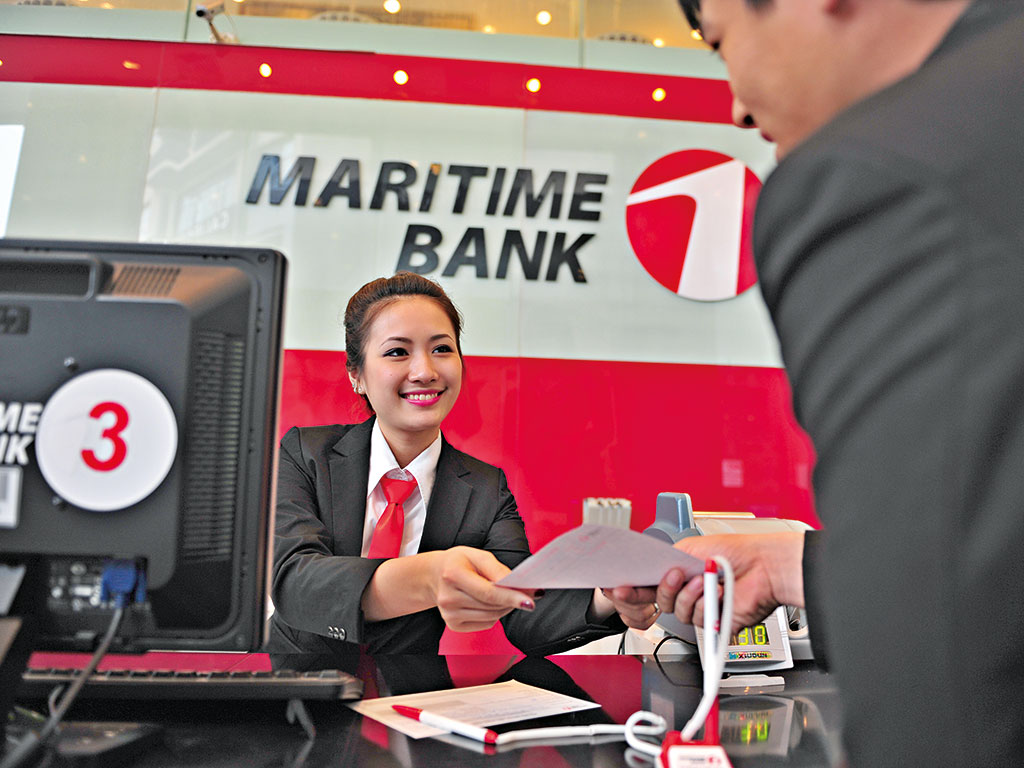 A transaction at a Martime Bank branch, which is based in Vietnam. The country's prospects are improving rapidly thanks to more foreign direct investment
Banking
Interview with: Dang Tuyet Dung, Deputy CEO, Maritime Bank

As a consequence of recession and financial crisis, the Asian economy has been slow over the last few years, but thanks to the gradual recovery of global and local markets since the end of 2012, along with the implementation of favourable policies by the Vietnamese Government, Vietnam has seen its economy improve significantly.

For starters, the country is well positioned to increase its exports even further (see Fig. 1), which are driven by technology and electronics, as well as other major exports including oil and gas, shoes, seafood and agricultural products, which demonstrates how deep their integration into the global and regional value chains have become.

Vietnam managed to maintain steady GDP growth of around six percent in 2014, which is considerably better than the global average, according to the World Bank (see Fig. 2).

What’s more, investment continues to flow into the country despite challenges earlier in the year, from both new and long-term investors, as Vietnam emerges as a high-end manufacturing hub. Samsung, for example, is about to build a $1bn factory in Vietnam, its third plant in the country to date, with a fourth in Ho Chi Minh City already being considered.

Banking industry reforms continue to be implemented under the close guidance of the State Bank of Vietnam (SBV), emphasising on the merging direction of local banks.

Several deals are already underway as part of an emerging plan, which is expected to bring about a significant change in the Vietnamese banking sector – something that will help make the market healthier and more attractive to outside investment

Active FDI projects in Vietnam, May 2015

Vietnam also benefits from having a young, well-educated and eager-to-learn population, which is another must-have for foreign investors. However, having investment in training these talent resources, and making sure the investments go into the right talents continue to be the key challenges that investor’s should take into account in their strategy of developing business in the market.

It is clear that Vietnam has been set on the right directions for growth. To find out how the country is planning to capitalise on its recent successes World Finance spoke with Dang Tuyet Dung, Deputy CEO of one of the country’s leading financial institutions, Maritime Bank.

What advantages does the Vietnamese market have that makes it so attractive for foreign investors?
By the end of May 2015, there were more than 16,300 active foreign direct investment (FDI) projects in Vietnam that have collectively pulled in a total of $238bn. In 2013, FDI inflow exceeded $22bn, an increase of more than 35 percent from 2012. The figures indicate that Vietnam has become a destination of choice for foreign investors.

Vietnam was influenced by the global and Asian market crisis, which led to slow economic growth and high pressure on non-performing loans (NPLs) in the banking industry. However, the Vietnamese government has implemented aggressive and consistent policies to stabilise the economy, manage inflation, and reduce NPLs. One illustrative example of such effort is the forming the Vietnam Asset Management Company (VAMC), designated to help transform the banking industry, which in turn, provides the necessary market stabilisation.

Vietnam also has a youthful population, with 60 percent of it in the working age. The country is located right at the heart of East Asia, a favourable geographical location – home to a number of large and vibrant economies. Being a member of the World Trade Organisation, and a party to multiple frameworks of international economic integration, including free trade agreements with partners both within and outside the region, Vietnam clearly becomes an attractive place for foreign investors. Furthermore, the country is part of the Trans-Pacific Partnership (TPP) negotiations.

To advance socio-economic development, Vietnam will continue to attract and efficiently use FDI inflows, focusing on FDI projects that use advanced and environmentally friendly technologies, and use natural resources in a sustainable way. The priority will also be given to projects with competitive products that could be part of the global production network and value chain. To achieve these targets, the Vietnamese Government has committed to create a fair and attractive business environment for foreign investors, and is constantly improving its legal framework and institutions related to business and investment. The government has been working hard on three ‘strategic breakthroughs’: putting in place market economy institutions and a legal framework; building an advanced and integrated infrastructure, particularly transport; and developing a quality workforce. These should all be completed by 2020 – confirmed by Prime Minister Nguyen Tan Dung. What other developments are currently underway in the country?
Vietnam’s economy further maintains its recovery trend in 2015 as the macroeconomic stabilisation and global economic developments are providing strong pillars for the growth. The growth target of 6.2 percent set by the government in 2015 is viable. The potential for growth in Vietnam is still there: the World Bank forecasts Vietnam’s economy growth rate in 2015 and the next two years will be on the upward trend. Vietnam’s GDP growth is forecast at six percent in 2015, which will be gradually increasing to 6.5 percent in 2017 thanks to positive developments in the manufacturing, export and foreign investment sectors.

However, there are also a number of problems and challenges to this acceleration in the upcoming period of time. Service and agricultural sectors have been struggling and slowing down in the past two years; the industrial sector may no longer sustain its rapid growth; industrial growth and trade balance are driven by FDI sector; the restructuring process for state-owned enterprises (SOEs) remains challenging and requires more consistency and speed-up; trade deficit, and budget overspending has yet to improve; concerns about public debt are looming; geopolitical tensions pose an imminent risk, etc.

Export markets are expanding and Vietnamese products afford a competitive advantage. Industries such as textiles and garment, leather and footwear, seafood, and more, have a chance to thrive. The domestic market also benefits from the importation of goods and services at competitive prices and consumer support.

There is pressure to reform many sectors due to tough competition from abroad as tariffs fall and technical barriers are applied. Domestic industries such as steel manufacturing, insurance, banking and finance, retail and consumer goods are under high pressure. The requirement for SOEs reform is more urgent than ever. In the face of opportunities and challenges posed by the conclusion of free-trade agreements, the role of the relationship between Vietnam and other partners in the negotiation of such agreements has become increasingly important. Such a role has been demonstrated by the attainment of terms, which help mitigate challenges while still managing to utilise opportunities from these agreements. As the Vietnamese economy strengthens, what are the implications for the country’s banking sector?
The banking sector and financial market in general have benefitted from the economic recovery. Only when economic growth is stable can the banking sector have better growth prospects. Given the fact that net interest income makes up 70 percent of the profit composition, flourished credit can create an opportunity for banking sector to improve its profit. Besides, banking services will further grow in the era of the internet-connected and hi-tech economy. Rapid credit growth will help improve NPL ratios, and safety for the banking system. Amid the challenges and opportunities from the integration, the banking sector must be persistent with the restructuring process and improvement of the system health in order to grasp new opportunities.

However, to ensure sustainable development, lending control must be tightened; required ratios must be better adhered to for avoidance of adverse impacts on the verge of a real estate bubble.

How does Maritime Bank support Vietnam’s economic advancement?
Maritime Bank has a sound and sustainable development strategy. In recent years, the bank has been restructuring itself aggressively. The majority of NPLs have been resolved given the focus on having dedicated asset management company to handle NPL, the proactive effort of selling debts to VAMC and the strong guidance towards credit policy and collection structure of new loans book.

Credit growth has been under control and mobilisation carried out with caution. A modern banking platform has been built and various products have been offered – including online products, state budget collection, online payment, retail banking products and corporate banking products. Finally, MDB – the Maritime bank merger – is under way to help strengthen the network advantage and bank’s capitlisation.