Green sukuk will be vital to achieving COP21 goals

In light of the mammoth environmental challenges we face, Islamic banking is attempting to change the world for the better with green sukuk 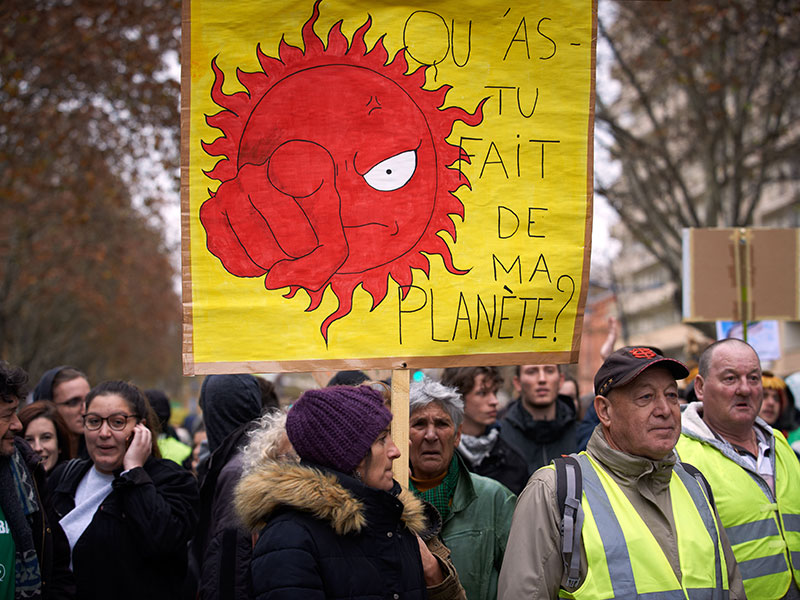 "What did you do with my planet?" Members of the gilets jaunes movement joined forces with an environmental protest on December 8
Banking | Featured | Islamic Banking
Author: Mourad Mekhail, Former Wall Street Banker and Financial Advisor

The Paris Agreement – commonly referred to as COP21 – set out to limit the rise in global temperature to two degrees Celsius above pre-industrial levels. In October, the Intergovernmental Panel on Climate Change (IPCC) recommended reducing this cap to 1.5 degrees Celsius, stating that “rapid, far-reaching and unprecedented changes” must be taken to curb the harmful effects of global warming.

As such, it’s terribly disappointing that the US pulled out of the Paris Agreement. In the G20’s latest meeting, the group of industrialised nations were unable to reach an agreement regarding COP21, with the US reiterating its desire to withdraw from the accord and its intention to use all available energy sources.

Unsurprisingly, these actions sent shockwaves around the world, with many speaking out against the US’ decision. “We will no longer sign commercial agreements with powers that do not respect the Paris accord,” said French President Emmanuel Macron during the 73rd session of the UN General Assembly in New York. Just one day later, Macron confirmed the unfortunate impasse at the second One Planet Summit, but refused to admit defeat: “The Paris Agreement was supposed to be dead because of one decision. [But] climate change is not an agreement or a decision made by heads of states and governments.”

The Paris Agreement isn’t working out so well for Paris. Protests and riots all over France. People do not want to pay large sums of money, much to third world countries (that are questionably run), in order to maybe protect the environment. Chanting “We Want Trump!” Love France.

US President Donald Trump, meanwhile, has added fuel to the fire, using the ‘gilets jaunes’ (yellow vests) movement to attack the Paris Agreement. And yet, the movement arose as a response to rising fuel prices – it’s not an anti-environment movement. The recent protests on December 8, for example, took place at the same time as a climate march, which a number of yellow vests joined.

These immature actions from the Trump administration will decelerate the progress of environmental protection efforts. I believe the US must fulfil its moral responsibility and rejoin the Paris Agreement, perhaps even taking the lead in this global effort. Indeed, the world is in need of a binding environmental deal – agreeing to anything else would be worthless.

Arresting climate change
Our generation is the last to avoid – or, at least, the last to still have the opportunity to minimise – the catastrophic effects of climate change. In other words, we now know the impacts of global warming and it’s up to us to implement smart initiatives to arrest it.

During a recent IPCC meeting, South Korean President Moon Jae-in proposed a number of significant goals for climate change adaptation and elimination. But in order to reach Moon’s targets, the whole world has to contribute – we must uphold our moral responsibility, otherwise there will be no future generations left. To do so, we have to propose an energy strategy that discourages the use of fossil fuels and nuclear power in favour of natural gas and renewable energy sources, such as wind, solar and hydroelectric power. This involves phasing out coal-fired power stations and improving facilities to cut toxic emissions. Finally, we must suspend the construction of new nuclear reactors and shut down existing nuclear reactors.

Fortunately, the One Planet Summit saw a number of political and business leaders commit to tackling climate change: BlackRock, for example, promised to launch an investment fund to finance the development of renewable energy and low-carbon transport in Africa, Asia and Latin America; the World Bank pledged to launch a $1bn platform for developing battery storage technology; and the EU promised to allocate 25 percent of its next budget, earmarked at €320bn ($363.8bn), to climate initiatives. Of course, these are great gestures, but are they enough?

There are several categories of Islamic banking products, with sukuk being the best known among them. A sukuk is similar to a bond, but it complies with Sharia law. Broadly speaking, a sukuk buyer has the ownership interest of the underlying, Sharia-compliant asset. In recent years, the sukuk market has been attracting more and more conventional investors, who increasingly favour ethical investment funds. Consequently, the industry is expanding at a rapid pace.

In 2002, the Luxembourg Stock Exchange became the first European exchange to list sukuk. Since then, it has listed sukuk from issuers in Malaysia, Pakistan, Saudi Arabia, Qatar, Bahrain, the UAE, the US, Hong Kong and South Africa. What’s more, Luxembourg issued the first sovereign sukuk, which was denominated in euros, in 2014.

Given this growing interest, the Islamic banking market is expected to reach $4trn by 2025. Encouraging and favouring investments in sustainable, renewable and responsible projects will further enhance this growth, while also helping to diversify its funding sources.

Green sukuk are similar to other debt instruments and offer attractive returns, but they also come with the added promise of using the proceeds to finance the world’s transition to a low-carbon economy. As such, green sukuk can help to combat climate change by paving the way for climate-smart investments in environmentally friendly projects that are based on sustainable resources. Tadau Energy, for example, issued the world’s first green sukuk in July 2017 for MYR 250m ($59.6m) in order to finance a solar power plant in Malaysia. Indonesia issued the first green sovereign sukuk for $1.2bn soon after.

As defined by Climate Bonds Initiative, eligible assets for green sukuk include: solar parks, biogas plants, wind energy projects, renewable transmission and infrastructure projects, and electric vehicles. Equally, they can be used to subsidise a government’s green payments. The Climate Bonds Initiative is an international, investor-focused, non-profit organisation, and is the only body of its kind working solely to mobilise the $100trn bond market towards climate change solutions.

Extraordinary opportunities
In its recent report on green sukuk issuance, S&P Global explained that a large number of countries are targeting a higher contribution of clean energy within their energy mix. For example, the Association of South-East Asian Nations and the Gulf Cooperation Council (GCC) have set ambitious targets to invest in renewable energy.

This promises vast opportunities for investors. Indeed, directly after the Paris Agreement was signed, the International Finance Corporation, a member of the World Bank Group, calculated investment opportunities in infrastructure and climate-smart solutions to be worth a whopping $23trn.

The International Energy Agency, meanwhile, expects energy demand to increase significantly over the next 25 years. As such, substantial investments will be required to meet growing demand. What’s more, BP’s yearly forecast for the global energy market, published in February, suggests that renewable energy will play a commanding role in the future. In fact, BP estimates that, if current trends continue, renewables will grow by some 400 percent by 2040.

In my opinion, sukuk have proven their practicality for financing projects that are socially and ethically responsible, especially when it comes to infrastructure. Sukuk are becoming more common and attracting a greater number of investors – both conventional and Islamic – who are interested in socially responsible finance.

Based on my 25 years of experience in global banking, I believe green sukuk are a unique ‘win-win’ product for investors from cash-rich GCC and Islamic countries. They also offer a great opportunity for stakeholders seeking to generate excellent returns on their capital and for the large number of people who will benefit from the resultant employment opportunities.

A growth industry
The Islamic banking sector is charged with promoting the green sukuk market. It can do so by driving demand for climate-smart investments, while also enticing the Islamic capital market, takaful and retakaful operators (insurance companies that comply with Sharia law), sovereign wealth funds and Islamic banks to mobilise funding for green asset funding.

Over time, the sukuk market will become established – particularly as more green sukuk come to market – attracting conventional and Islamic investors alike. As a result, more players will realise their credibility and profitability, which, in turn, will help achieve greater growth. This will finally catalyse the move towards environmentally friendly projects, leading to heightened climate resilience. All of this will be achieved while creating a profitable market that presents great employment opportunities and reduces living costs for billions of people around the world.

Personally, I wish to see sukuk – especially green sukuk – occupy an enhanced position in the global market. I believe that Islamic banking has a responsibility to act as a guardian of natural wealth for future generations. I also believe that green sukuk can change the world for the better by contributing significantly to the financing of climate-smart projects.

Mourad Mekhail is a former Wall Street banker and an expert in financial services. He earned his MBA in International Economies from Trier University, Germany. Mekhail has served as Advisor to the Board of Directors at Kuwait International Bank since 2011, following stints at Merrill Lynch, UBS, LBBW and Credit Suisse.