Microfinance can help women to fight their way out of poverty, but financial inclusion alone is not enough to spur significant economic development 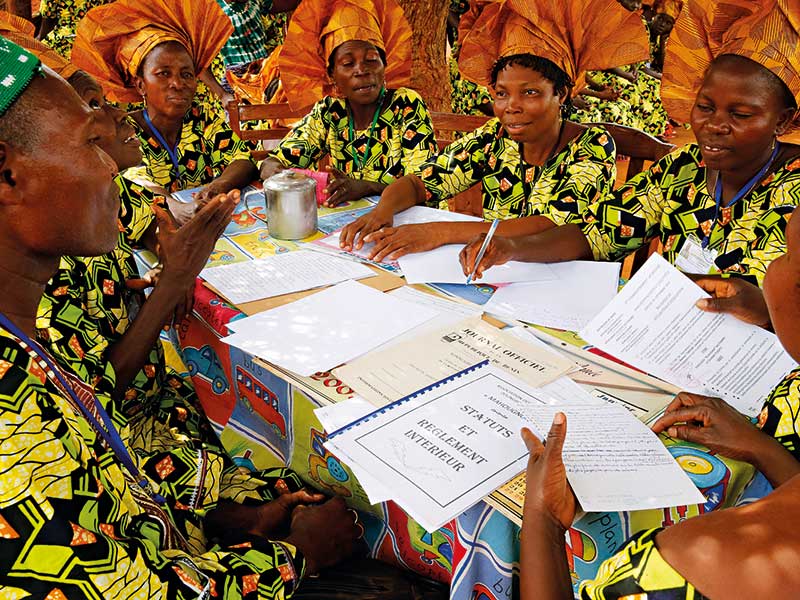 As well as being a seminal quote from John F Kennedy’s inaugural address, “help them help themselves” is an idea that has long been discussed and explored with respect to the global poverty agenda. As a result, when microfinance – a mechanism that provides financial services to those who do not otherwise have access – was unveiled in 1983, it was hailed as revolutionary. Finally, here was a method designed to alleviate poverty the world over, precisely by helping people to help themselves.

Yet in the years that followed, criticism from various outlets has clouded much of the good that microfinance can still achieve. Of course, there is no smoke without fire, and unfortunately there are those who seek to profit from vulnerable individuals – but that is not the only ending to this particular story.

The incredible thing about microfinance is its potential to both spur economic activity within a community and challenge the status quo. This is particularly the case for women in developing economies, who face even greater barriers when it comes to accessing financial services than their husbands and fathers. Given that 80 percent of microfinance institutions’ poorest clients are women who live on less than $1.25 a day, according to the State of the Microcredit Summit Campaign Report 2012, microfinance products, from micro-loans to micro-insurance, can be life changing.

The ripple effect
Without access to their own bank accounts, individuals living in poverty-stricken communities must rely on informal employment, which affords them little security and very few rights. Furthermore, as starting and growing a business is virtually impossible without access to financial services, people in these communities are extremely restricted in terms of the opportunities available to them. These restrictions, together with an informal vehicle for saving, mean a significant segment of the populace is simply unable to push their way out of poverty.

Such scenarios are not only prevalent due to the nature of living within a low income society; in the case of women, they are also driven by cultural nuances and governmental regulations.

Rupert Scofield, Founder and CEO of microfinance institution Finca, told World Finance: “In many countries where we work, cultural norms deny women the opportunity to seek employment or start their own businesses. At Finca, we made it our mission to redress this enormous waste of valuable and productive human resources. We provide many enterprising women with the resources to start their own businesses.”

As argued by Linda M Scott, Professor of Entrepreneurship and Innovation at Oxford University, in her paper Thinking Critically About Women’s Entrepreneurship in Developing Countries, in developed nations, women’s entrepreneurship is supported as part of an overall drive to promote growth. In developing countries, however, international dialogue is centred on it being a strategy for poverty alleviation.

In part, this is due to the cumulative effect women’s entrepreneurship can have within a community. Scofield agreed with Scott: “Micro-credit schemes, for example, have been directed almost exclusively at women, because, it is argued, women invest the money in goods and services that improve the wellbeing of families, in goods that are conducive to development.” As the income of men does not produce the same ripple effect within a community, supporting women’s entrepreneurship has become a preferred method for economic development.

It has been argued that there is a bidirectional relationship between women’s empowerment and economic development, because with the former comes access to the crucial components of the latter. This includes healthcare, education and income opportunities, social rights and political participation – and vice versa.

In her paper Women Empowerment and Economic Development, Esther Duflo wrote: “In one direction, development alone can play a major role in driving down inequality between men and women; in the other direction, continuing discrimination against women can, as [Amartya] Sen has forcefully argued, hinder development. Empowerment can, in other words, accelerate development.”

Fortunately, it has become increasingly evident within the international community that gender inequality is a cause of poverty, rather than an outcome, and should be treated as such. As Scott wrote: “‘Gaining the benefits’ of inclusion is a purposefully positive way to spin ‘avoiding the damage’ caused by inequality.”

Education, Education, Education
Access to financial services can help to reduce gender inequality in developing nations by establishing a new role for women within the household: by bringing in her own income, a woman’s dependency on her husband is reduced and her bargaining power is increased.

“The most empowering thing for women in the developing world is having their own income that is not controlled by their husbands”, Scofield explained. “When they have resources of their own and don’t have to beg their husbands for money, it completely changes the family dynamics. Suddenly the woman in the family is seen as an important and vital contributor by the husband and children. Sadly, before this transition, women are often disrespected and treated no better than the animals”.

This too has a cumulative effect: the more women who are empowered in this way, the more likely it is their peers will follow suit. Scofield told World Finance: “We have further noted that women-owned and women-operated businesses generally employ other women, so there is a ripple effect in the community. As one successful woman social entrepreneur put it, when women run their own businesses, there is no problem of a glass ceiling.”

Importantly, the daughters of such women will be afforded more opportunities than their mothers, particularly in terms of education – something that is fundamental in the fight against poverty. In his address to the UN World Conference on Women in 1995, then-President of the World Bank James Wolfensohn highlighted: “Education for girls has a catalytic effect on every dimension of development: lower child and maternal mortality rates; increased educational attainment by daughters and sons; higher productivity; and improved environmental management. Together, these can mean faster economic growth and, equally important, wider distribution of the fruits of growth.”

As argued by Wolfensohn, the more education girls receive, the more women there will be in leadership roles in all aspects of society. The way in which communities resolve problems and make decisions could therefore be transformed.

Obstacles to overcome
While it is evident that empowering women is crucial for economic development, and that microfinance can act as a key to unlocking this door, there is a snag in the system: microfinance supports women’s empowerment – and, in turn, more education for girls – but without education in the first place, the power of microfinance can be limited.

Many women in eastern and southern Africa, for example, seldom attend primary school for more than a few years, while secondary school attendance is even rarer. However, as education is a crucial accompaniment to financial services, eliminating the barriers around obtaining credit can often be futile. Without business training and financial literacy, many women living in extreme poverty are simply unable to understand the caveats of the loans they are taking out, nor are they able to keep track of their finances, and spiralling credit can be a result.

Poverty is a battle – to successfully conquer it, those living in its grip must have the right weapons and tools

What’s more, even with access to capital, proficiency in the skills needed to navigate financial products, and the entrepreneurial drive and creativity to create a successful business from scratch, circumstances can simply limit what these women achieve. For example, as discussed in Scott’s paper, if a woman selling fruit wished to add value to her products by making jam or chutney, her circumstances may prevent her from doing so, even if she had financial backing.

Specifically, many homes in remote areas have makeshift stoves, meaning heat cannot be controlled, while ingredients or condiments to add variation to the products are not obtainable. Neither may it be possible to sterilise jars – indeed, the jars themselves may not even be available.

As such, there are places in which micro-loans are offered to the poor, even when there is little opportunity for investment. In such situations in Bangladesh, it has been noted that women use their loans to purchase plane tickets for their husbands to work abroad, many of whom send remittances but never return home. Though these payments can help, they do little to provide a sustainable income or empower women, so that all-important ripple effect within a community is not catalysed.

Fortunately, even in the remotest areas with very few investment opportunities, there are alternative systems that can be more effective. The likes of Avon, Jita and Living Goods, for example, provide women with fast moving, novel products to sell within their communities. Not only is this essential for enabling women to achieve a sustainable income, this business model also provides female entrepreneurs with the training and logistical support needed to make their businesses viable. The battle for equality
According to the Microcredit Summit Campaign, between 1990 and 2008, microfinance lifted 10 million people out of poverty in Bangladesh. Globally, the number of people who have borrowed from microfinance institutions reached 211 million by December 2013 – more than half of whom were women (see Fig 1).

Evidently, microfinance can transform lives and communities by acting as a springboard to entrepreneurship, providing education for children and delivering insurance if a natural disaster strikes – yet microfinance alone is not enough. With it must come financial training, realistic opportunities and the support people need in order to invest capital successfully. Clearly, as argued by Scott and others, financial products alone are just part of a much larger parcel needed for poverty alleviation.

And yet, with the right backing, microfinance can provide the impetus women in poverty need to challenge the status quo and make something more of their lives than previous norms and customs have dictated. In doing so, they create a ripple effect that lifts others out of poverty. This cumulative effect swells further as the children of these women have greater access to education, healthcare and employment opportunities, meaning they can create even better lives for themselves and their own families.

Through such a transition, greater equality within a community can transpire, and women in developing states may no longer have to face discrimination and violence. In such a future, women are enabled to fulfil their potential, and in doing so they can benefit their entire community. As shown by numerous studies, only with equality can genuine, long-term economic development occur.

Poverty is a battle – to successfully conquer it, those living in its grip must have the right weapons and tools. Governmental entities, the international community and private institutions are therefore charged with not only promoting financial inclusion, but also providing the education and opportunities needed to maximise the possibilities brought forth by microfinance.

Economic development is a highly complex, multi-faceted phenomenon, which is why it requires all citizens to contribute to its success – and that means empowering women in order to ‘help them help themselves’.