While they are supposed to be the most secure place to put your money, many banks have seen their vaults raided over the years 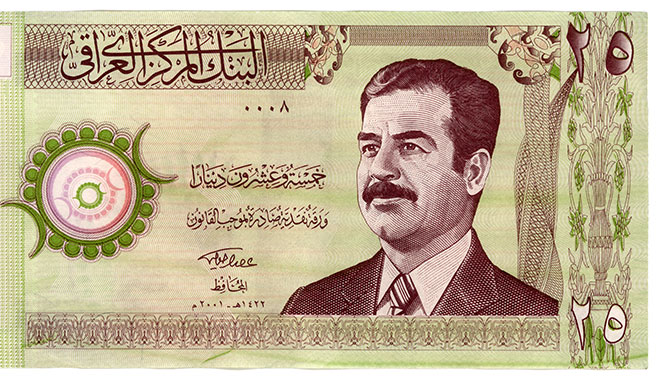 Former Iraq dictator Saddam Hussein was printed on many of the nation's banknotes. That didn't stop him from stealing nearly $1bn from Central Bank of Iraq in 2003
Banking

Over the last century banks have been broken into in all manner of ways – from the elaborate to the bizarre – and vast sums of money have been stolen.

Dangerous and mysterious, the popularity of classic caper movies and books proves that they have well and truly entered the public consciousness. Here we look back at some of the biggest, most iconic, most damaging robberies in history.

What is by far the largest bank robbery in history was not perpetrated by a normal off-the-street criminal. In fact, in an audacious move, nearly $1bn was stolen from Iraq’s Central Bank by its very own dictator.

Saddam Hussein, anticipating that US bombing would begin the very next day, sent his son Qusay to the bank with a handwritten note ordering that the money was withdrawn.

US troops later found approximately $650m in Saddam’s opulent palace, but the rest was never found. With Saddam’s execution and Qusay’s death in a fire fight with US troops, the remaining $350m may never be found.

July 11, 2007, and managers at the Dar Es Salaam Bank in Baghdad enter the vault for a normal morning check. To their surprise, and overnight, the bank’s guards had laid bare the bank’s coffers, taking $282m.

The heist was a classic inside job according to officials, who said the guards must have had links with the militia to escape Baghdad without being stopped at a checkpoint. It was not clear why the bank had so much cash on hand, but most of the money has since been recovered.

The Banco Central Heist in Fortaleza in Brazil is a heist so elaborate, it probably deserves its own film. Three months before the burglary, a gang of criminals rented an empty house in the centre of Fortaleza, just two blocks away from the bank. Over the next few weeks, and under the pretence that the building was a plant shop, the burglars excavated a 78m (256ft) tunnel to the bank’s vault.

On the final weekend, they broke through the reinforced concrete and evaded the security systems to make off with $71.6m. So far, authorities have only recovered $3.8m of the notes.

On March 24, 1972, a group of seven men from Ohio broke into a branch of the United California Bank in Laguna Niguel, gaining access to the safety deposit vault. Inside they managed to loot what was, at the time, a world record amount at approximately $30m (worth $100m today), but due to the undeclared nature of safety deposit boxes the true value was never ascertained.

The theft was executed perfectly, but a few months later the gang performed a similar crime back in Ohio. The burglaries were linked by the FBI and the gang soon arrested.

In 1998 an ambitious plan to rob the Bank of America’s World Trade Centre branch went off without a hitch, but blunders by the perpetrators after the event quickly led to their capture. Struggling mobster Ralph Guarino orchestrated the plan by convincing a friend who worked in the building to give him access to it.

The money was seized by three gunmen, including Guarino, from couriers delivering a fresh supply of cash to the bank. The FBI quickly tracked Guarino and his team down, who had become a major target of other New York gangs looking for a slice of the haul. In light of this, Guarino elected to become an FBI informant rather than settle for jail time.